Single dad Will wears football jerseys with zip-off hiking pants, thinks nothing of carrying a sequined mermaid purse and takes his responsibilities at his daughter’s school very seriously.

Or, as a character tells him in Wednesday’s Single Parents premiere, he’s in “the vortex, that place where you’re so wrapped up in your kid that you’ve lost all touch with your adult life and the person you used to be.”

The ABC comedy stars Saturday Night Live vet Killam stars as Will, who serves as room parent at his kid’s school. That’s where he encounters a group of fellow single moms and dads — including Angie (Gossip Girl‘s Leighton Meester), Poppy (Scandal‘s Kimrie Lewis) and Douglas (Everybody Loves Raymond‘s Brad Garrett) — who make him realize how starved he is for adult friends. 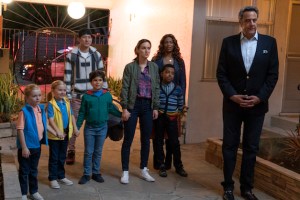 In an effort to get out of their school responsibilities, they decide to distract Will by making him a Tinder account and shepherding him through his first date in years. The transition is a rough one for the sensitive dad, who is forced into skinny jeans and sent out to dinner with a woman who barely pays attention to him… until she jumps him on her couch. But when he whispers “I love you” just a moment into their makeout session, she kicks him out. And when he realizes he’s left his keys at her place, he winds up banging on the door and yelling so much that the police show up.

In the end, Will is saved from a ride to the precinct by his new friends, who show up, get him out of trouble with the cops and participate in a Moana singalong that — while ridiculous — is not as ridiculous as it sounds. And just like that, the group of snarky singletons adopt the lonely dad into their circle.

Now it’s your turn. Grade the premiere via the poll below, then scroll down to let us know whether you’ll continue watching Single Parents.