Halloween came early to American Horror Story: Apocalypse with an hour of deadly tricks, eye-opening treats and the long-awaited arrival of a very familiar trio. Fresh off last week’s discovery that Kathy Bates is, in fact, playing some sort of robot, Wednesday’s episode also peeled back a layer of Mallory, confirming that Coco’s bespectacled assistant isn’t at all what she seems. And neither is Coco.

The episode began with Michael explaining to Gallant that his grandmother “died peacefully in her sleep.” Any suggestion that Gallant stabbed her (repeatedly!) after mistaking her for the Rubber Man is pure “nonsense,” he insisted. He then boasted about having “night vision of the soul,” which allows him to “see into the dark places people try desperately to keep hidden.” (Depending on how long they’re all underground, I’m sure it’ll be a big hit at the First Annual Outpost 3 Talent Show.) 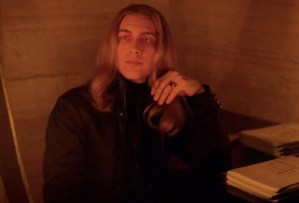 Michael’s power of perception proved useless on Coco, who’s “too shallow for any kind of meaningful negativity,” but worked wonders on Mallory, who admitted, “I feel like there’s someone buried inside me, trying to claw their way out.” Understandably intrigued, Michael went full spooky face on Mallory, prompting her to blast him across the room using powers that she didn’t even know she had.

Mallory couldn’t articulate what happened to her, nor was she able to activate her pyrokinesis at Coco’s request, but whatever she did was enough to leave Michael unsettled. “I thought I destroyed them all, but one survived,” he screamed to Papa Satan. “I beg for your wisdom! Please, Father, open my eyes!” And in case the bloody snakes weren’t a dead giveaway, daddy listened.

But Mallory wasn’t the only Outpost 3 resident going through an identity crisis this week. Still processing (or “computing,” I guess) the fact that she’s a robot, Ms. Mead poured her (fake?) heart out to Venable, insisting that she has memories of a life well-lived: She remembers dressing up as Rosie the Robot for Halloween as a kid, she remembers going to see Rosemary’s Baby with her first date on Halloween as a teen, and she remembers taking out her first terrorist on Halloween as an adult. (In summary: Halloween = a big day for Ms. Mead.)

And this Halloween was no exception. She and Venable co-hosted a raucous masquerade ball, complete with a game of bobbing for (poisoned) apples. Laughter turned to aggressive projectile vomiting as all of the partygoers — Mallory Gallant, Timothy, Emily, Dinah, her son, everybody — dropped dead. 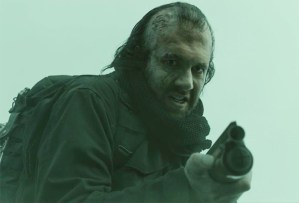 And what would an epic Halloween party be without an unexpected guest? As foretold in the latest Ask Ausiello, Billy Eichner’s not-so-dead Brock arrived at Outpost 3 with a special message for his beloved Coco: “Happy Halloween, bitch!” (In case you didn’t watch the episode and you’re wondering about the tone of Brock’s delivery, you should probably know that he stabbed her in the forehead as he said it.)

The deaths continued when Venable and Ms. Mead went to inform Michael that they were doing the selecting from now on, and that he didn’t make the cut. But because he’s always one step ahead, Michael compelled Ms. Mead to shoot Venable (R.I.P.), before explaining that Ms. Mead’s construction was inspired from Michael’s caretaker as a child — someone who was “dear” to him.

Then. Came. The. Best. Part. With most of Outpost 3 dead, three familiar-looking outsiders — Cordelia Foxx, Madison Montgomery and Myrtle freakin’ Snow — arrived on the premises, wasting no time waking up their “sisters,” Mallory, Coco and Dinah. “Surprise, bitch,” Madison cooed. “I bet you thought you’d seen the last of me.” Music to my ears.

Your thoughts on this week’s Apocalypse? Any predictions about the witches’ war with Michael? Or any theories about the inspiration behind the creation of Ms. Mead? Whatever’s on your mind, drop it in a comment below.