The CW has generally presented its upcoming Charmed reboot as a separate entity from the original WB series, but a new trailer appears to suggest otherwise. Released earlier this week, the trailer contains a quick shot of the new Charmed Ones — Macy (Madeleine Mantock), Mel (Melonie Diaz) and Maggie (Sarah Jeffery) — flipping through the famed Book of Shadows, only to land on a very familiar entry: Melinda Warren. 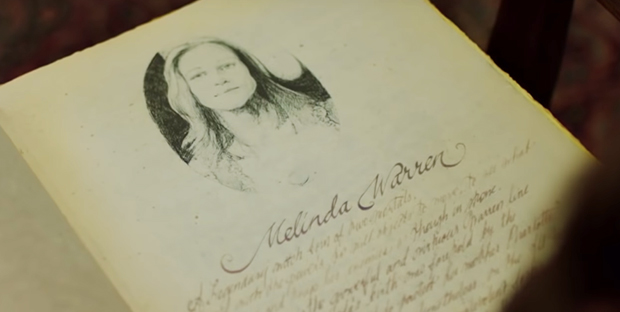 Though rarely shown, Melinda Warren was a frequent presence in the original series. A powerful witch from 17th century Salem, Mass., Melinda began the bloodline that would eventually lead to the births of the original Charmed Ones — Prue (Shannen Doherty), Piper (Holly Marie Combs), Phoebe (Alyssa Milano) and Paige (Rose McGowan). Does this mean they also exist in the universe of the reboot?

While discussing the reboot with TVLine, the new cast of Charmed promised plenty of “nods” to the original series, but incorporating the woman whose existence resulted in the births of the Halliwells feels like… more than a nod. As TVLine exclusively reported, the new sisters will also find themselves up against a potentially villainous CEO named Alastair Caine (played by Reign‘s Craig Parker), though there’s no apparent connection between him and the demon named Alastair who appeared on one episode of the original series.

The Melinda Warren reveal was seen by fans who caught an early screening of the pilot at San Diego Comic-Con, but the page was not featured in any of the trailers previously release by The CW. The new Charmed premieres Sunday, Oct. 14 at 9/8c. Hit PLAY on the trailer above, then drop a comment with your thoughts below: Will you be watching?