Warning: The following contains spoilers for Sunday’s Fear the Walking Dead. Proceed as you might if the Filthy Woman was coming toward you with one of her “pets.”

A hazard of Fear the Walking Dead repopulating itself with characters who are easy to care about is that, when one of them is handed a death sentence, it actually hurts. So it is with some regret that I inform you that Sunday’s “MM 54” put a ticking clock above the head — and a bite mark in the side — of a Season 4 newbie to whom we were just starting to warm. Who was doomed? And why did Alicia and Charlie end the hour wearing the rarest of expressions — smiles? Read on and find out. 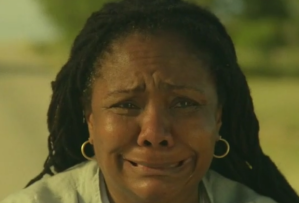 ‘SOMEONE WILL HELP US… SOMEONE WILL COME’ | As the episode began, we flashed back a ways and discovered why the Filthy Woman became not only filthy but nasty and bats— crazy to boot. Turned out, Martha — she has a name! — and her husband were in a car crash that left him impaled by a highway guardrail. But, despite her assurances that someone would stop and lend them a hand, vehicle after vehicle sped by. After Martha’s husband finally succumbed to his wounds and turned, she dispatched him with a piece of glass, buried him and then ca-rack! Her mind shattered. Next thing we knew, she was hiding her lovely complexion under enough dirt to suggest she’d been mud-wrestling and killing off Clayton’s band of do-gooders in hopes of making Polar Bear extinct. The farthest she made it, though, was getting Morgan on the radio from that diner in Mississippi. 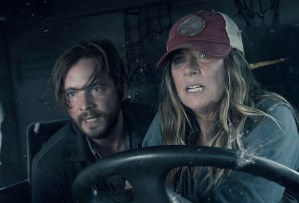 ‘S— IN A SANDBOX!’ | From there, “MM 54” cut to the aftermath of Martha’s shooting spree at the tail end of “Blackjack.” Everyone was more or less fine; Wendell’s wheelchair, not so much. As chemicals began leaking in our heroes’ truck — a sure TV sign, Morgan knew, that an explosion was imminent — Martha made a U-turn and parked nearby; she was out of ammo, Al explained before making a run for her beloved SWAT van. Once the others had fled from the truck, Martha ruptured Al’s eardrum with a gunshot and attacked June with a walker on a leash. They were all expendable to the villainess formerly known as the Filthy Woman — except for Morgan, she said. “You have so much more potential.” Thankfully, Wendell was able to fire a shot at Martha, giving Morgan a chance to save June. When the truck blew up, Martha seized the opportunity to retreat and leave the group to the approaching walkers. “They’ll finish it,” she all but cackled. “That’s what they do.” 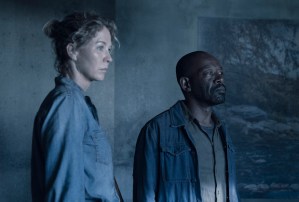 ‘BAD S— HAPPENS WHEN YOU TRY TO HELP PEOPLE’ | After our protagonists stumbled away from the wreckage and the walkers, with Jim pulling along Wendell (whose chair had been put on makeshift skis), Morgan spotted a sign for a hospital. No way was Jim going, he said. They had to keep moving. What’s more, they were only in this mess because Morgan had insisted on helping folks. Hey, Sarah snapped. “You wouldn’t even be here if Mo-Mo hadn’t saved your ass from those meat-munchers. You owe the man.” So, despite some more hemming and hawing, Jim remained with the group. Once they reached the hospital, walkers crowded around the entrances like the place was Walmart on Black Friday. Still, it was enough of a breather for June to patch up everyone’s minor injuries and for Wendell to reveal to Al that he understood Martha. When he’d been a kid, he’d saved a fellow youngster from being hit by a car. “He got up,” he said. “I didn’t.” And even that didn’t turn him into a cynic; it only made him want to help people more. But when, hoping to do so, he applied to the Marines, the recruiting officer laughed him out of the office. 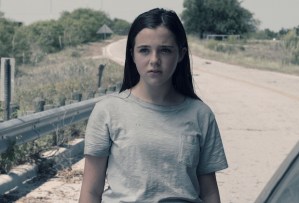 ‘WE ONLY HAVE RIGHT NOW’ | Meanwhile, Alicia and Charlie made their way to the site of Martha’s standoff with Morgan & Co. Despite the pile of extra-dead walkers and the remains of the truck, the group could still be alive, Charlie insisted. But, since she and her traveling companion had no idea where they might have gone, Alicia elected to go west — randomly, we thought at first. But later, she revealed that “we’re not looking for Morgan or the others” — they were going to Galveston, so that Alicia could show the youngster the beach. All they had was that moment, she argued, “and who knows how long we’re gonna have that?” So Alicia was doing the one thing that she knew she could do: Show Charlie a beach. Back at the hospital, Jim noted that Morgan had helped him when he hadn’t had to, and was on the verge of apologizing for his behavior when — dang it! — walkers broke through the front door. 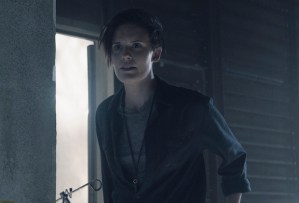 ‘LET’S STIR SOME BEEF’ | Finding himself in yet another fine mess, Jim retracted his almost-apology and challenged Morgan to save them. Mo-Mo’s idea? Head upstairs. Unfortunately, the hospital was soon as full of walkers as an anthill is of ants, and our protagonists’ blockades were no match for their sheer numbers. By the time Sarah had revealed to Al that she’d quit the Marines because she hadn’t agreed with their code of conduct — in other words, their rejection of Wendell — the stairwells were impassable. How could they keep going up? Ultimately, it was decided that Sarah and Al would go start the generator in order to turn on the elevators and get Wendell to the roof, and Morgan would stay with the group to ensure that they actually made it into the elevator. (How they’d get down seemed to be the big, gaping hole in this particular plot.) 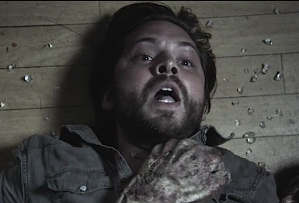 ‘NO, NO, NO… I HAVE BEER TO MAKE!’ | As will happen in a hospital overrun with walkers, Morgan and Jim were attacked. Jim, as is his habit, called for help with his zombie, but Morgan was pretty tied up with two of the undead himself. So Jim actually had to kill a walker himself. It was a messy affair that sent him crashing through a pane of glass, but by golly, he did it. “That wasn’t so hard,” he said afterward. At the same time, Sarah and Al realized that they might not both make it back from the generator room, so Al insisted that Sarah leave then and there. “There will come a time you won’t get to be with” your brother, she said. “That’s not now.” At last, everyone except Al made it to the roof. Jim seemed pretty pleased to show off his cut from his fight with a walker, too… until June noticed that it hadn’t been glass that cut him, he’d been bitten!

‘SO WHAT’S NEXT?’ | While Morgan beat himself up over what was to be Jim’s fate, June let him know that she still had faith in him. Even when he admitted that he couldn’t get them off that roof, not with the fire escape out like it was, she maintained that faith. “You will,” she said. Elsewhere, Charlie was starting to put her foot down about looking for Morgan & Co., so Alicia admitted her real reason for the ill-advised beach jaunt. “I thought if I could get you there, that would be good… I just need something to be good.” Charlie did, too. And right on cue, they heard water. It wasn’t the beach, but it might have been even better. It was the flash-flood lake that had trapped Strand and John. We didn’t see what the two of them saw after finding John’s hat in the drink, but judging from their smiles, I think it’s safe to say that it was Strand, Dorie or both.

So, what did you think of “MM 54” and the Filthy Woman’s backstory? Will you be sorry to see Jimbo die so soon? Hit the comments.