The strangest, coolest, most inspiring thing has happened to Fear the Walking Dead during Season 4 (the Walking Dead spinoff’s first under its new showrunners): It’s become a series about really flawed characters doing their best to do better. So it was particularly upsetting when, in Sunday’s episode, the Filthy Woman (as you’ll recall we’re calling her until she’s given an actual name) ordered Morgan & Co. to lay off the altruism… or else. And when, as you’d expect, Morgan & Co. didn’t lay off the altruism, she demonstrated just what she meant by “or else.” Who got caught in her unfriendly fire? Read on… 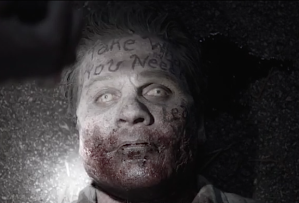 ‘I LET HIM BECOME WHAT HE WAS MEANT TO BE’ | As “Blackjack” began, June and Morgan were concerned that Quinn had yet to arrive at Mile Marker 27, Al was concerned that her van and its treasure trove of tapes had yet to arrive, and the others were wondering how many other unexpected passengers were going to be loaded on board the truck before all was said and done. “What is this,” cracked Jimbo, “an airport shuttle?” When he was left alone with Wendell, he noticed a walker lumbering up behind the wheelchair user. Rather than panic, Wendell merely deployed spikes on the back of his chair… allowing Sarah to swoop in and steal his point for the kill, dang it. When the group got a closer look at the re-deceased, June was able to ascertain that it wasn’t Quinn. “What kinda sicko s—o does that?” asked Sarah upon seeing that Purvis’ face had been used like a Post-It note. Right on cue, the Filthy Woman walkie-talkie’d in, allowing Quinn to, er, say hello to June. “You hear that?” asked the Filthy Woman as the walker argh’d in the background. “He’s not weak anymore.” 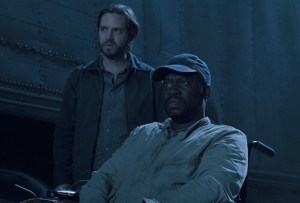 The villainess also had a message for Morgan, who was understandably unnerved that she knew his name: Stop making people, including himself, weak by leaving care packages all over the highway. If he packs it in, he’ll be as strong as he used to be, and she won’t have to make him that way again. “I know who you really are,” she added, hinting at demons that the tortured protagonist had thought he’d exorcized. The following day, Morgan buried the walker and laid out a plan: They were going to find his friends and the guy whose rig they’d commandeered (Polar Bear, according his journals), then they were going to stop the Filthy Woman from hurting people. Balking, Sarah asked “hypothetically” what Mo-Mo would do if they didn’t go along with his plan — could he drive a big rig like that? No, but Al would do it for him, she said; she was eager to get Polar Bear’s story. And what, asked Sarah, pulling a knife, if she didn’t let them take the truck? In a flash, Morgan knocked the weapon out of her hand with a shovel. “OK,” said Sarah in that funny way that only Mo Collins can. It was Mo-Mo’s way and the highway. 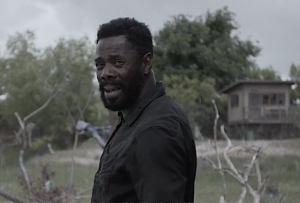 ‘THE EARLY BIRD KILLS THE DEAD’ | Shortly, we learned that during the storm John and Victor had gotten stranded at a well-stocked ranger station by a flash flood. For his part, John kept busy building a raft straight out of Gilligan’s Island in hopes of getting past an exceptionally ravenous alligator to the other side of the lake. Strand, on the other hand, spent most of his time lamenting the fact that he’d left a mansion with a wine cellar to join John’s foolhardy search for Charlie. Even after raft No. 1 sank like it was made of lead, Dorie’s enthusiasm wasn’t diminished. He was 100 percent certain that he’d find June again and give her the piece of candy (her favorite kind, no less!) that he’d found in his shirt pocket the day he took off after Charlie. By and by, he spotted a camper that had run off the road — its shell would make a great raft, he thought. Though Victor reluctantly agreed to help obtain the flotation device, he was quickly distracted by a bottle of wine on the vehicle’s floor. In his efforts to retrieve said bottle, he was pulled through the passenger side window by the walker in the driver’s seat and went tumbling downhill in the camper like he was vodka being shaken, not stirred. 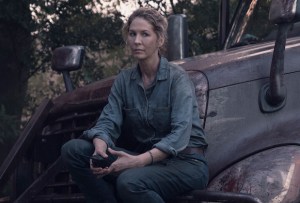 Afterwards, John sweetly lit into Victor for risking his neck for a bottle of wine. Had he always drunk? Yes, but before, “I was an amateur,” said Strand. “I’ve gone pro.” But why? asked our good-natured cowboy. Victor drank to forget, he explained, that he no longer had anyone to drink with. (R.I.P., Madison.) What’s more, unlike John, Strand didn’t have anything to look forward to, just things to reflect upon. Well, if Victor joined him on the raft, John promised, he’d be his new drinking buddy. An agreement made, John set off the camper’s horn to attract walkers to distract the alligator, and off they floated. Unfortunately, they had scarcely left shore when the battery died, and these being strangely fast-acting walkers, they immediately lost interest. In no time, the alligator had attacked the makeshift raft, leaving it with a hole big enough to sink Jaws’ Orca. John was able to distract the beast again by attracting the walkers with gunshots. But Strand was well and truly over it. He swam back the little distance they’d gone, and John wasn’t far behind. (Has anything ever been sadder than the sight of John giving up hope of seeing June again and eating the Blackjack that he’d intended to give her?) 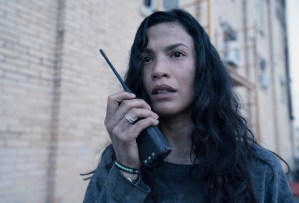 ‘I’D LOVE TO HAVE ONE LAST BEER’ | Meanwhile, Luciana made tracks to the library in hopes of finding Charlie. Instead, she happened upon an older fellow named Clayton who’d been pinned disastrously in his car during the storm. “Why do you wanna help a total stranger?” he asked. “I have some things to make up for,” she replied. And his response to that — “Don’t we all” — made you wish that his condition wasn’t critical. At least Lucy could grant the dying man’s final wish, she thought. All she had to do was get him a beer. At first, it appeared that her efforts would be in vain. She even found a beer truck — completely empty. When she suggested to Clayton over the walkie-talkie that her good intentions didn’t matter if she failed, he told her that once upon a time, he’d taken a job that would take him away from the whole world, and it wasn’t until the world had really gone away that he’d realized the enormity of his mistake. By then, he couldn’t help the people from whom he’d run away, so he’d helped those that were still around. (Polar Bear, is that you?) His point: “Just because you weren’t able to help me, Lucy, doesn’t mean you’re not gonna be able to help someone else.”

As luck would have it, Lucy discovered one of Morgan’s “Take what you need” boxes, inside it, a bottle of Jim’s beer. “You don’t give up,” Clayton marveled upon her return. Grateful, he wanted to give her something: a coupla notebooks indicating where he’d left supplies. He’d been a truck driver, he explained. (Polar Bear, that is you… or was, since he wasn’t gonna pull through.) Later, Lucy switched her walkie-talkie to the channel that Morgan had written on the care package. “What you left,” she said, “it helped more than you will ever know.” Wonder of wonders, Morgan heard her, and he and his traveling companions soon had her aboard the Polar (Bear) Express. Next, Morgan got a call from Charlie — she and Alicia had found another box with the walkie-talkie channel on it. Before the crew could all be reunited, however, the Filthy Woman radioed in, and as you’d expect, she wasn’t moved by Mo-Mo’s insistence that helping people made both the helper and the helpee strong. In fact, she was so unmoved that she sped up Al’s tank till it was right beside the rig carrying our heroes and opened fire.

So, what did you think of “Blackjack”? And bigger question: Do you like the new, sort of optimistic, help-your-fellow-man tone that the show has adopted? Hit the comments.