As if we weren’t ’shipping Fear the Walking Dead’s June and John hard enough! Sunday’s episode began with the erstwhile Naomi killing time while stranded post-storm with Al by watching and rewatching her fella’s video interview. Then, keeping tears out of her eyes if not her voice, she hoped against hope that he’d hear when she marveled over the walkie-talkie at his certainty way back when that he’d eventually find his “Laura.” If someone asked her right then if she believed she’d find him again, she wouldn’t be able to muster up that sureness, she admitted. Yet by the end of “Weak,” she did get a reunion. Was it with the man she loves and we love her with? Read on and find out. 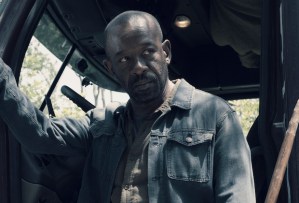 ‘THINGS ARE PRETTY TOUGH RIGHT NOW’ | The hour had scarcely gotten underway when June and Al, out of both diesel fuel and water, received a call over the walkie-talkie. Trouble was, it was so staticky, they couldn’t tell that it was Morgan. After the women decided to improve their odds of getting a clear signal by hiking to higher ground, Al discovered that June had used up the last of her camera battery watching John reruns, and June discovered that Al was ill. Soon, the pair found a new ride, and Al, mellowing about this period during which she couldn’t film anything and everything that moved, admitted to June that she understood why watching John’s tape was the next best thing to being with him. Had Al had a special someone? June asked. Apparently not. “Been doing what I do since before the world went to s—,” replied Al, adding that collecting stories means “you kinda stop having your own.”

Meanwhile, Morgan — or Mo-Mo, as Sarah had taken to calling him — continued to irk his traveling companions by making them stop so often to drop roadside care packages and reach out via the walkie-talkie that they might as well have been walking. Eventually, he brought the whole trip to a halt so that he could take a stroll in hopes of getting an answer from the woman he’d almost heard on the walkie-talkie. If only his reception was as good as that of the villainess described in the show’s press materials as Filthy Woman. (Until Tonya Pinkins’ character gets a name, guess we’ll go with that.) She could hear June as plain as day — and blamed her pet zombie for the soft state of her fellow survivors. “You made them weak,” she told Purvis. 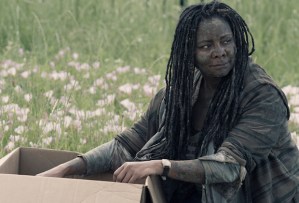 ‘YOU… SHOULD BE CAREFUL’ | Weakness, we’d soon learn, was a big deal to the Filthy Woman. When Morgan happened upon her while he was putting the “walk” in “walkie-talkie,” she insisted that she didn’t need any of the supplies from the care package she was examining. “I don’t need any help,” she said. “I’m not weak.” Mo-Mo kept moving, so he didn’t see her dribbling what looked like dirty water into a bottle of clean water. But she still managed to weird him out (which ain’t easy, considering he’s dealt with Wolves, Saviors, Scavengers and enough ghosts to staff a haunted house). Elsewhere, June and Al were stunned when the SWAT van zoomed past them on the road. Sickness be damned, “we’re stopping that son of a bitch,” declared Al, whose high-speed chase soon left them with a flat. At that point, June was ready to give up on the truck. So Al told her that she had Cipro aboard; therefore, getting back her truck was her best chance of getting back on her feet.

In hopes of catching up with the SWAT van, June was changing the flat when she and Al heard the weaponized vehicle’s guns firing… nearby! Go after it on foot, Al pleaded. And although reluctant to leave her ailing companion behind, June did so. In no time, she was face to barrel of a gun with a man who sounded an awful lot like “Naomi.” “We’re all the same,” he said, “doing things to protect the people we care about… people we know, people we love… Thats where it stops.” So he didn’t — couldn’t — believe for an instant that a stranger like her would help him. That being the case, she grabbed for the gun, punched him in the groin and threw him out of the van. There was just one problem: It was outta gas. What’s more, there was no Cipro to be found! After Al kicked out the tire jack to drop her ride on an attacking walker, she admitted to June over the walkie-talkie that there never had been any Cipro, she’d just wanted her van back. 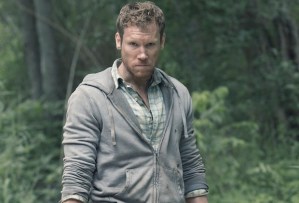 ‘YOU CAN’T HELP PEOPLE IF YOU’RE DEAD’ | When June got back to Al (with Augmentin, at least), she was understandably pissed. June had almost killed the guy who took the van — she almost became the person she’s been trying so hard not to be. The least Al could do was reveal why the van was so important to her. It wasn’t the van that was important, Al admitted finally. Not as much as the tapes. They were all that was left of most everyone she’d ever interviewed, and not all of the people on them were virtual strangers. So “it isn’t just other people’s stories on the tapes, it’s my story,” she said. “It’s the people I knew, people I loved… and I’m not gonna leave them behind.” While all this was going on, Morgan climbed a tower and called out once more over the walkie-talkie. This time, June and Al could hear him clearly, but he still couldn’t hear them.

Thanks to Morgan’s message, the women knew that they’d have to hurry to reach his location before he and his companions took off. But Al still refused to leave the van and its contents. She even let June get behind the wheel and start driving away before she fired a shot in the air to say that she’d changed her mind. “I would’ve walkie’d,” she cracked, “but the battery” is dead. And as luck would have it, they were able to catch Morgan & Co. before they left. Though June was bummed that John had yet to turn up, she was deeply moved to learn how Morgan was trying to help people with the contents of the truck until he could return it to its original driver. She was so moved, in fact, that she reached out over the walkie-talkie to the SWAT van thief, gave their location and invited him to join them. “You won’t be who you were,” she said. And, as they exchanged names — his was Quinn — the moment had the feeling of humanity being reborn.

‘I HAVE TO LET YOU GO NOW, PURVIS’ | While Quinn was en route to mile marker 27, Morgan reminded Al that she was welcome to come with them all the way to Alexandria. “When I stay with people, I stay,” she replied. “But I don’t plan on staying.” When Quinn reached the rendezvous point, June and her pals were nowhere to be found. What gives? he asked over the walkie-talkie. And just as he discovered that someone had used a piece of tape to turn mile marker 21 into mile marker 27, the Filthy Woman attacked him with Purvis on a leash. Afterwards, she released the walker into the night. “You did what you were supposed to do,” she told him. “Now I’m gonna set you free to keep on doing it.” Not only did she now have a fueled-up SWAT van, she had a new pet: a zombified Quinn. As she wrote the “Take what you need,” etc., message across his face, she assured him, “You aren’t going to be weak anymore.”

So, what do you think is the Filthy Woman’s deal? Aside from being a few cards short of a full deck, she seems to love walkers as much as Celia did, no? Hit the comments with theories, criticisms… you name it.