The Emmys are almost here, and a glance at this year’s nominees for Outstanding Supporting Actor and Actress in a Comedy Series reminds me of a nagging technical gripe of mine: Why in the world are Saturday Night Live cast members being nominated in these categories, alongside actors from narrative comedy series?

If this strange category quirk feels like a recent development, that’s because it is: In 2008, the Emmys retired the award for Outstanding Individual Performance in a Variety or Music Program, where SNL cast members used to compete, and shifted them to the Supporting Actor and Actress fields. SNL‘s category takeover was gradual, with just a few scattered nominations at first. But now it’s bloomed into a full-fledged epidemic, with Alec Baldwin and Kate McKinnon winning both awards last year, and SNL-ers accounting for five total nominations across both categories this year — a full third of the nominees. 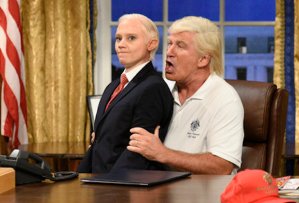 Now I’m not trying to say that SNL cast members don’t deserve a shot at Emmy glory. (McKinnon’s transcendent talent, in particular, has lent stability to a decidedly wobbly show for years now.) But comparing them to other comedy supporting performers is the TV acting equivalent of apples and oranges. SNL cast members can play dozens of different characters in a season, each in five-minute sketches; it’s simply impossible to judge them against actors playing a single role across 12 or 22 half-hour episodes. In fact, the SNL cast has an unfair advantage, since playing all those different roles allows them to show off a versatility that the other actors can’t match.

The real shame of SNL‘s category infiltration is that so many superb comedy performances are being left out of the Emmys mix as a result. This year’s most glaring snubs include One Day at a Time‘s Rita Moreno, Brooklyn Nine-Nine‘s Andre Braugher, The Good Place‘s D’Arcy Carden, Silicon Valley‘s Zach Woods… not only are they damning omissions, but they also represent a missed opportunity for the Emmys to promote unsung shows that deserve a wider audience — as opposed to a four-decade-old institution like SNL that doesn’t really need any further promotion at this point.

So let’s get SNL cast members out of the supporting comedy categories, I say. But where should they go?

Here’s my solution: Bring back the old award for best variety performer, and put them in there along with talk show hosts like Stephen Colbert and James Corden, who show off a similar skill set and don’t currently have their own category. You could even make room for the new award in the Emmys telecast by moving a few of the writing and directing awards (like Limited Series and Variety Series) over to the Creative Arts Emmys.

That way, we get another Emmy award with A-list nominees to televise, and we open up more spots for worthy supporting comedy gems to get the recognition they deserve. That’s a win-win we can all applaud for, right?

Now it’s your turn to weigh in: Should SNL cast members stay in the Emmys’ supporting categories, or get their own? Hit the comments to share your take.