Need to catch up? Check out the previous Mayans MC recap here.

In the final moments of last week’s Mayans MC premiere, it seemed Miguel Galindo’s wife and infant son were dangerously close to a life-or-death situation. Tuesday’s episode, fortunately, wasted no time in revealing what became of Emily and baby Cristóbal — and it was indeed grim.

We find Emily kneeling on the ground next to the vehicle she was being driven home in, weeping and staring down the barrel of a Los Olvidados member’s gun. Despite Emily’s pleas, Los Olvidados rip her son from her arms, then proceed to kill Emily’s driver after she calls the rebel aiming his weapon at her a coward. (She even curses him out in English and Spanish, which is highly impressive given the circumstances.)

The next day, Galindo tries to reassure his wife that their son will be returned to them soon — but she’s not buying any of his comfort. “[Your] world has crashed into my world, and that was not supposed to happen,” Emily seethes. “So now, I ask questions. And I need to know the truth, Miguel. Everything that happens.” Galindo, naturally, ensures his wife that she’ll be kept in the loop on everything rebel-related from now on… only to half-keep that promise for the rest of the episode.

Shortly after their conversation, Los Olvidados release a video that details the rebels’ mission, all while footage of the group burning Galindo’s heroin plays on the screen. “Our struggle is to take back what our grandfathers fought for — political and economic emancipation,” a rebel states in the video. “So, now is the time to stand up and be heard.” Though Galindo told Emily he would let her know of new developments, his wife doesn’t see the video until much later, and she finally realizes why Los Olvidados kidnapped their son: They took the child as insurance to stop Galindo from coming after them, considering they just publicly torched Galindo’s product. Emily begs her husband not to retaliate, now that she’s seen firsthand how ruthless the rebels can be. She knows they will hurt Cristóbal without remorse if Galindo tries to fight back — so he promises that he won’t. 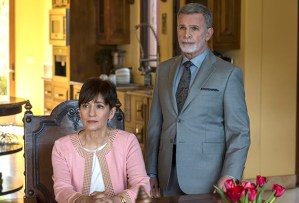 Everyone else in Galindo’s world, though, seems to think he should retaliate against the rebels — and it takes something huge for him to even consider changing his mind. Seeing that Galindo has no intention of fighting back, his advisor, José, convinces Galindo’s mother to share a story with her son: Galindo’s brother, also named Cristóbal, died when he was just a baby… but not from pneumonia, like his parents had told everyone. Rather, Eduardo Perez — Galindo’s father’s business partner — had made a deal with the Sonora Cartel, and OG Cristóbal was used as a bargaining chip to get Galindo’s father pushed out of the business. But the man refused to bend to the cartel’s wishes, and… well, you can assume what happened to the baby then.

“You want me to sacrifice my Cristóbal?” Galindo asks his mother, Dita. “Another son?” Though Dita admits that she hates herself for even having this conversation with Galindo, she and José convince him that he needs to draw first blood against Los Olvidados. “Fear is your strongest weapon,” José tells Galindo — and, though he seems unhappy with the decision, Galindo tells José that he is indeed ready to retaliate against the rebels. “Do what you need to do,” the cartel boss tells his advisor, to which José responds, “Done.”

If you’re wondering how the titular motorcycle club plays into this episode’s central plot, Galindo recruits the MC to do him a “personal favor” and track down the rebels that kidnapped his child. (The Mayans, meanwhile, are understandably peeved that they didn’t know the abduction was going to happen, and they scold Los Olvidados leader Adelita later in the episode for failing to loop them in on her plan.)

Thanks to EZ’s photographic memory, the Mayans are able to track down the station wagon that the rebels were apparently driving when they took Galindo’s son. But the vehicle is abandoned in a ditch by the time the MC finds it, and it seems the rebels were smart enough to transfer to a second car that they eventually drove back across the border into Mexico. (In other words: The chances of Galindo getting his son back anytime soon just got way, way slimmer.)

During the search for Los Olvidados’ getaway car, Galindo’s men track down a street vendor (and his young son), whose food truck music can distinctly be heard playing in the background of Los Olvidados’ mission-statement video. The vendor admits that he did see some children near the bonfire where Galindo’s product was burned that night, but he doesn’t have any intel on who took Galindo’s son — and that prompts Galindo’s men to douse the food truck owner with a pot of scalding grease, instantly burning his face and chest.

The vendor’s young son comes thisclose to suffering the same burns — a result of EZ mouthing off to Galindo and telling him to stop treating these men like “greasy f—king peasants” — but Bishop convinces Galindo to ease up on the torture while the MC tracks down Los Olvidados’ station wagon. Galindo agrees to stop… but once he gets word that the rebels drove off in a second vehicle, and once he makes the decision to retaliate against them, the food truck owner and his son meet a grisly end: Their bodies are burned to a crisp and dumped in the middle of Merchant Square for all to see, each of their mouths stuffed with the flyers that Los Olvidados posted around town, stating their mission to seize power from the cartels. 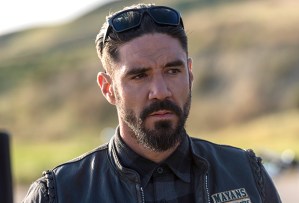 At the end of the hour, Emily — correctly sensing that she isn’t getting the full story from her husband — pays EZ a surprise visit at his father’s butcher shop. Despite their loaded history, Emily begs EZ to tell her if anything goes down between her husband and the rebels, considering Galindo won’t keep his promise to fill her in. That’s when EZ regretfully informs her that something already has happened — two innocent men were savagely burned and put on public display. Emily is completely torn up by the news and dashes from the shop, but before she goes, EZ assures her he won’t let anything happen to her baby. (The scene ends with a brief flashback to eight years earlier, where EZ and his father watch as paramedics cover a woman — EZ’s mother, presumably — with a sheet as she’s rolled on a stretcher.)

Other developments in Tuesday’s Mayans:

* During the MC’s meeting with Adelita, Angel informs her about EZ’s history with Emily, assuring her it won’t be a problem for the club. “Is he still in love with her?” Adelita asks, to which Angel responds, “More in love than I am with you, mi dulce?” Adelita smirks, but tells Angel they shouldn’t complicate things. (I think that will go well! Don’t you?)

But then, Twist No. 2: Later in the hour, Coco visits the website and clicks on a video, and he seems rattled by the identity of the girl in it — so rattled that we have to assume it is his sister, after all, or someone else very close to him. The episode concludes with Coco paying a visit to the street corner where his mother works as a prostitute.

“You must be really desperate,” the woman jokes when she sees Coco pull up. Coco’s response: “Shut the f—k up and get in the car, Mom. We gotta talk.”

OK, your turn. What did you think of Mayans MC‘s second outing? Drop a comment below with your thoughts!