If you’re at all familiar with Kurt Sutter’s original biker drama, the Mayans Motorcycle Club should ring a bell, as the Oakland, Calif., faction was a major rival-turned-ally of Jax Teller’s Sons in the mothership series.

Mayans MC, though, takes place four years after — SoA series finale spoiler ahead! — Jax’s death, and it follows the Mayans based in Southern California, particularly new club prospect Ezekiel “EZ” Reyes (Revolution‘s JD Pardo). When we meet EZ, he’s in the trial phase of his club membership, forced to do all the dirty work for his potential brothers while they decide whether or not to trust him in the long-term. (And I mean “dirty work” very literally. At one point, EZ is forced to roll up a one-armed corpse in plastic wrap, just in case you needed a reminder of how brutally violent and bloody Sons of Anarchy and its ilk can be.)

When the Mayans are tasked with running drugs to Las Vegas on behalf of cartel boss Miguel Galindo (Law & Order: SVU‘s Danny Pino, in a deliciously dark role), they decide that EZ is trustworthy enough to join them on the job — but the delivery goes south when the Mayans are intercepted and robbed by a Samoan gang, the Base Town Tribe. 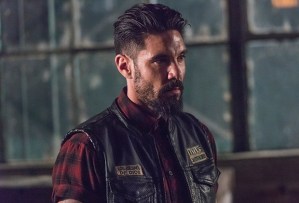 As with anything in the Sons world, nothing is quite as it originally seems, and that holds true time and again in the Mayans premiere: First, even though it seems the Samoans are entirely to blame for the Mayans’ failed drug run, it turns out the Base Town Tribe members were merely middle-men; it was actually another group, Los Olvidados (aka The Rebels, aka The Forgotten Ones), who made the call to intercept the Mayans’ shipment and ding their reputation with Galindo.

But wait — there’s more! Up until the final moments of the premiere, the relationship between the Mayans and Los Olvidados seems fairly black-and-white. Galindo, whose cartel has been stymied by these rebels multiple times in the last six months, is furious to hear that they robbed his men, and he wants them dead — specifically, their leader, Adelita. The Mayans, naturally, are on board with this plan… until it’s revealed that they aren’t. In fact, several members of the club — including EZ’s brother, Angel (Clayton Cardenas, American Crime) — actually want to work with Los Olvidados. As Angel tells EZ at the end of the episode, “Los Olvidados and these other vigilante groups are changing the game,” and it could be in the Mayans’ best interest to team up with these rebels and fight back against the domineering cartels that don’t give the MCs any respect.

After keeping the Mayans’ real plan from EZ for the entire premiere — or, in reality, several months — Angel decides to loop his brother in on the potential team-up with Los Olvidados and, by extension, officially initiate EZ as an actual Mayans MC member. Yay! Right?

Well, not exactly — because there’s one more subplot that turns out to be drastically different than how it appears. When we’re first introduced to EZ, he comes off as a bright-eyed club prospect who wants nothing more than to impress his fellow brothers, no matter how many armless dead bodies he’s forced to roll in plastic wrap. (Some other members have even taken to calling him “Boy Scout,” which isn’t entirely uncalled for.)

But as we come to learn during this first episode, EZ isn’t breaking into the club business because he wants to be a part of the brotherhood. Rather, EZ’s life was upended eight years earlier when he apparently killed a police officer, and the bright future he was planning with then-girlfriend Emily (Once Upon a Time‘s Sarah Bolger) went down the drain. He was ultimately presented with a deal: Get involved with the Mayans, slowly give the DEA enough intel on the Galindo cartel that the agency can take it down, and EZ will get his life back. 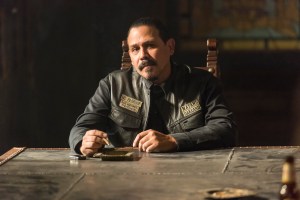 “What I signed up for was feeding you intel on Galindo, only Galindo,” EZ angrily reminds his DEA contact, after the man threatens to alter EZ’s arrangement. “My brother, the MC, nothing touches them… The day the DEA has enough to move on that cartel is the day I walk away. From you, from the MC, this town, all of it. I get my f—king life back.”

That’s why, when Angel finally loops EZ in on the Mayans’ plan to work with Los Olvidados, we know that EZ is way, way more conflicted about committing to the club than he actually seems. “I need to know you’re all in,” Angel tells his brother. And EZ, seemingly against his better judgment, responds: “I’m all in.”

Other notable moments from the premiere:

* In a flashback to eight years ago, EZ’s then-girlfriend, Emily, visits him in prison and reveals that she’s pregnant. She bolts out of the visitation room right after presenting him with the sonogram, and when he tries to chase her down to talk about it, he’s held back by prison guards… and Katey Sagal’s Gemma Teller Morrow (!) is glimpsed watching from the other side of the room. “A—holes,” she mutters about the guards, and it seems her appearance in EZ’s life could mean she was involved in his deal with the DEA. (But I’m just speculating here!)

* Speaking of EZ’s ex, did I mention Emily is now married to extremely scary cartel boss Miguel Galindo? It seems she didn’t keep the baby she was to have with EZ all those years ago, but she does have another son with Galindo — and she’s become a target of Los Olvidados. Even though the rebels don’t harm her in the premiere, it sure looks like that’s their plan.

OK, your turn. What did you think of Mayans MC‘s first episode? Grade the premiere in our poll below, then hit the comments to back up your choice!