Showtime’s melancholy Kidding, which debuted Sunday, marks Jim Carrey’s first series-regular gig since his stint on Fox’s In Living Color — but is it any good?

Kidding is not so much a comedy, but rather a half-hour exploration of grief, as (mostly) told through the eyes of a beloved children’s TV personality, Jeff Pickles, who is modeled after the iconic Fred Rogers. The parallels between the two men are not exactly subtle: Mr. Pickles is a fixture on PBS who is entering his third decade on-air. At one point, we see footage of Mr. Pickles testifying before the Senate, which mirrors Mr. Rogers’ famous 1969 testimony on behalf of public television. Mr. Pickles, meanwhile, often dons a sweater vest, while Mr. Rogers was known for wearing sweaters.

In the premiere, we learn that Jeff is separated from his wife, Jill (Arrested Development‘s Judy Greer), following the death of their son. The footage of Jeff’s Senate testimony is seen in a devastating flashback; it plays in the backseat of the family car as Jill is driving her identical-twin sons — Will and Phil — and a truck rams into them, resulting in Phil’s demise. A year has passed, and everyone is processing their loss in different ways. Jill has mostly chosen to repress her grief in an attempt to move past it. Will, meanwhile, has entered a rebellious phase. At one point, we watch as he attempts to sneak a beehive into his mother’s car, only to be stopped by Jeff. Will shows his father little-to-no respect, and ultimately falls in with a pot-smoking crowd he encounters at his brother’s gravesite. 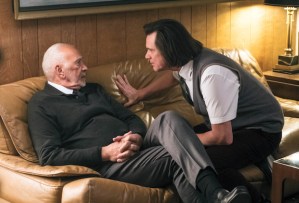 Jeff, meanwhile, approaches his executive producer, Seb (The Americans‘ Frank Langella), about dedicating an episode of Mr. Pickles to teaching children about death. Seb, who also is revealed to be Jeff’s father, fears the subject matter is too heavy for their target audience and could jeopardize their multimillion-dollar empire. Jeff won’t take no for an answer, so Seb greenlights the episode. They film a touching musical number about what it means to lose something you hold near and dear to your heart, but Seb later decides against airing it. He does so without telling Jeff, who tunes in for that day’s episode and is aghast when he notices the song hasn’t made it to air.

Feeling like he’s lost control of both his fractured family and his alter-ego, Jeff decides to rebel in his own way. He shaves a part of his head, ruining Mr. Pickles’ signature locks, then buys the house next door to Jill. While the realtor gives him a tour, he looks across to his former kitchen window and sees Jill with another man. That’s when he snaps, breaking the kitchen faucet in his new home.

The premiere episode also introduces us to Jeff’s sister, Deirdre (Get Out‘s Catherine Keener), who works on Mr. Pickles as head puppeteer. It initially seems as though Deirdre’s biggest problem in life is that her daughter won’t eat her vegetables, but she soon finds out that her husband is gay and having an affair with their next-door neighbor.

TVLine critic Dave Nemetz has already weighed in with his review of Kidding — but now it’s your turn! Grade the premiere via the following poll, then drop your thoughts in a comment below.