Yes, Showtime’s new series Kidding stars legendary comedian Jim Carrey, and yes, each episode is a half-hour long, but don’t be fooled: It’s not a comedy. Instead, this decidedly strange show — debuting Sunday, Sept. 9 at 10/9c; I’ve seen the first four — is a deeply melancholy journey into the psyche of a broken man. That’s not necessarily a bad thing, but despite some nice touches and performances, Kidding gets stuck somewhere between comedy and drama, and isn’t entirely successful at either. 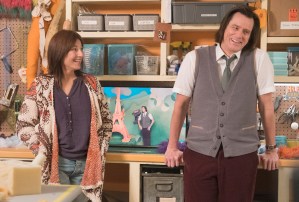 Carrey’s Jeff Pickles is the beloved host of a long-running kids’ TV show with lots of songs and puppets, a la Mr. Rogers. He’s like a time traveler from a kinder, gentler era: naïve, and earnest, and always seeing the best in everyone. But Jeff is still reeling from a devastating family tragedy — his son Phil died a year earlier in a car crash — and his estranged wife Jill (Judy Greer) and other son Will (Cole Allen) now want nothing to do with him. (“Do you always have to talk to people like they’re four years old?” Will scathingly asks his dad.) Jeff’s eggshell-fragile mental state starts to crack under the pressure, leading him to act out in some not very kid-friendly ways.

A lot of Kidding‘s humor comes from the stark contrast between Jeff the endlessly cheerful innocent and the cynical modern world that surrounds him. But the “comedy” here is often too bitter to swallow. It’s not really a lot of fun to watch Jeff’s sunny worldview be roundly rejected by a cruel, uncaring universe over and over again. TV is overrun these days with so-called comedies that lean more towards drama, but few of them are as unrelentingly bleak as Kidding. I didn’t laugh much across four episodes, so I wouldn’t even call it a dark comedy — it’s just dark.

Carrey is, of course, just about the perfect choice to play Jeff. He’s a vastly underrated actor (how does he not even have an Oscar nomination?) and his innate warmth easily elevates the material he’s given here. But Kidding‘s approach to Jeff is hard to pin down: Are we meant to be sympathizing with him, or laughing at him? In some scenes, he’s like a child in an adult’s body from an ’80s body-switching movie. (When asked about his vices, Jeff confesses, “I have been known to take a sip or two of chocolate syrup, right out of the bottle.”) In others, he explodes with violent rage. Plus, Jeff’s desire to rekindle things with his wife walks a very fine line between romance and stalking, occasionally tumbling over into creep-ville. 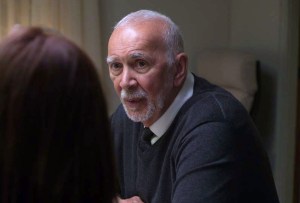 A fantastic supporting cast helps keep Kidding afloat, despite the tonal confusion. Catherine Keener is wonderful as the TV show’s puppet master Deirdre, who has a difficult daughter of her own at home. Frank Langella is superb as always, playing Jeff’s gruff and pragmatic producer Seb. (“Don’t say friends when you mean viewers,” he barks at Jeff.) And Greer does some of her best work yet as Jill, a woman fighting hard to define herself as something other than Mrs. Jeff Pickles. The writing ultimately lets them down, though: Seb’s harshness is too one-note, and son Will’s adolescent rebellion is too familiar.

Kidding reunites Carrey with his Eternal Sunshine of the Spotless Mind director Michel Gondry, a gonzo visionary of the highest order, and though Gondry mostly plays it straight here, the enchanting puppets that populate Mr. Pickles’ TV show certainly tickle the imagination. (I have a particular fondness for Astron-Otter.) The show also deserves credit for not offering easy answers on the complicated process of grief. There are small moments of genuine emotion here that I appreciated: Jill taking a deep sniff of her dead son’s baseball cap, or a gang of car thieves returning Jeff’s car unharmed once they realize it’s his.

Those glimmers of hope, and the grade-A cast, are almost enough to merit a recommendation. But too often, the act of watching Kidding is an unpleasant one: Nearly everyone on screen is sad, or angry, or unfulfilled, or all of the above. Maybe this could eventually develop into an odd little gem, but creator Dave Holstein’s previous credits — the later seasons of Weeds, The Brink, I’m Dying Up Here — don’t inspire confidence. As much as I enjoy Carrey and company, I just don’t see myself wanting to spend much more time in Mr. Pickles’ neighborhood.

THE TVLINE BOTTOM LINE: Jim Carrey’s Kidding is admirably weird, but it’s too bleak to work as a comedy, and too flippant to work as a drama.