Alan Tudyk will be putting the “doom” in Doom Patrol: The actor has been cast as the villainous Mr. Nobody in DC Universe’s upcoming live-action series, our sister site Deadline reports.

Formerly known as Eric Morden, Tudyk’s character is transformed into a baddie after being exposed to mysterious experiments by ex-Nazis in post-war Paraguay. He emerges as the “enigmatic and totally insane” Mr. Nobody, a living shadow capable of draining the sanity from others. 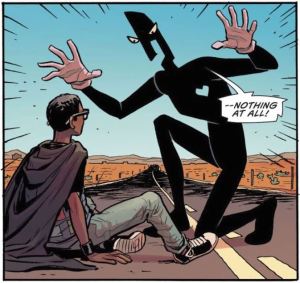 Doom Patrol — which received a series order from the DC Universe streaming service in May — follows a group of people with superhuman abilities who are united to investigate the weirdest phenomena in existence and protect Earth from what they find. When they are called to a new mission by Cyborg (Jovian Wade, EastEnders), they embark on a journey that will change their lives forever.

Tudyk, whose recent TV credits include The Tick and Dirk Gently’s Holistic Detective Agency, joins a cast that includes April Bowlby (Two and a Half Men) as Elasti-Woman, Diane Guerrero (Orange Is the New Black) as Crazy Jane and Brendan Fraser as Robotman.

As previously announced, DC Universe’s digital subscription service will launch on Saturday, Sept. 15. Doom Patrol is expected to debut in 2019, but its characters will first appear in the live-action Titans series, premiering Friday, Oct. 12.

Are you looking forward to Tudyk’s turn as Mr. Nobody? Hit the comments!