Camille Preaker has had to do a lot of acting since she arrived back in Wind Gap: Pretending she actually likes those gossipy ex-cheerleaders that went to her high school. Feigning interest in the town’s tactless Calhoun Day festival. Shrugging off the horrifying gang rape that defined her teenage years.

And yet, none of this acting comes close to the Oscar-worthy performance that Camille is forced to turn in during Sharp Objects‘ series finale, which aired Sunday night. Hours after realizing that her mother was responsible for her younger sister Marian’s death — and that Adora is likely killing Amma the same way — Camille has no choice but to return to her childhood home and eat dinner with Adora, Alan and Amma like nothing is wrong, when she is in fact on the verge of completely losing it. (Perhaps Camille won’t win the award she deserves, but a 2019 Emmy win for Amy Adams would be a nice substitute.)

As the family sits around the table, a livid Camille takes notice of Amma’s sweaty forehead and glazed expression — a result of the “medicine” that Adora has been pumping into her daughter for the last day. After Camille suggests that Amma stay with her in St. Louis for a while (an idea that Adora and Alan unsurprisingly squash), Adora puts her hand to Amma’s head and claims the girl is still feverish, forcing her upstairs to bed without dessert. “I want cake!” a disoriented Amma whines, and the panicked look on her face as she’s dragged from the room is enough to get Camille to intervene.

Camille decides to fake an illness of her own, doubling over in faux-stomach pain at the table, in order to subject herself to Adora’s care and confirm that the woman’s medicine is actually lethal. (After all, Camille was too stubborn to ever take her mother’s medicine as a girl, which seems to be why she never suffered from the same sickness as Marian.) And Adora plays her part, too, swooping in immediately to comfort her daughter and give her a spoonful of whatever toxic mixture she’s been concocting for all these years. “More, Mama,” Camille says after the first dose — and Adora happily obliges.

Unsurprisingly, Adora’s home remedy quickly begins to harm Camille; she wakes up hours later, pale and sweaty, and immediately vomits over the side of her bed. “You took it, didn’t you?” Amma asks, warning her half-sister not to attempt walking if she can help it. Realizing that Adora took both of her daughters’ cell phones away, Camille urges Amma — who is slightly steadier than Camille at this point — to escape from the house and get Det. Willis’ help. 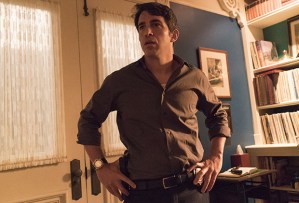 “If anything happens to me, you tell them that Mama took care of me. You understand?” Camille urges Amma. “So you go. And you don’t come back.” (But the girl doesn’t go. She’s intercepted by her father on her way out the door, and she decides to stay home and eat her long-awaited slice of cake instead. “I’m sorry,” Amma sobs to Camille later, when Camille realizes that the girl didn’t go for help after all. “I have to stay a good little girl.”)

While the women are slowly being poisoned at the Crellin household, Chief Vickery and Willis are still trying to piece together what happened to Ann Nash and Natalie Keene. Despite getting arrested for the murders, John Keene is adamant that he didn’t hurt either girl — and when he hears that girlfriend Ashley gave him up to the police, John merely suggests that she wanted to get revenge on him for never sleeping with her.

Vickery and Willis seem to have their doubts, too. When they talk privately after interrogating John, the men confess they aren’t sure if he was really involved in either girl’s death. And when the conversation turns to Adora, Vickery admits that she “loves her attention, then scolds you if you give her too much.”

Their suspicions of Adora only grow as the episode progresses. Vickery has a particularly awkward encounter with Alan at the barbershop, in which Alan reveals that some kind of sickness has been making its way around the Crellin house. And Willis, for his part, returns to the local Wind Gap bar, where he spies a Calhoun Day poster on the wall and stares at it warily.

Later that night, Willis — who was never contacted by Amma anyway — decides to go to Adora’s house and investigate for himself. By that point, Camille has become so sick from Adora’s medicine that she can barely walk. After downing more than a full bottle of the stuff, she’s throwing up constantly and going in and out of consciousness. She’s taking a bath when Willis arrives at the house, and she attempts to get to the hallway and cry for his help. But Camille is practically paralyzed by the poison in her system; she can hardly even crawl across the bathroom floor, and her weak shouts for Willis’ attention are drowned out by Alan’s classical music, which was suspiciously cranked up as soon as Willis rang the doorbell. 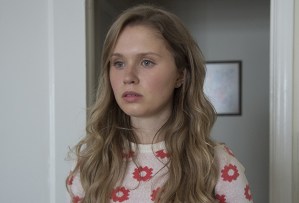 Alan lies to Willis that Camille is “out with those girlfriends of hers,” which Willis doesn’t buy, especially after he sees Camille’s car parked in the driveway. He ultimately leaves the property, and it seems that Camille is about to die on her mother’s bedroom floor — but just as she’s fading away, she sees the red flash of police car lights on the ceiling, and Willis and her editor Frank are suddenly standing over her, wrapping her in a robe and getting her the medical attention she so desperately needs.

A lot of loose ends get tied up very quickly then: Adora is arrested and put in jail — not only for attempting to kill her daughters with an antifreeze/prescription drug/rat poison cocktail, but for murdering Ann and Natalie, too. (The whole teeth removal thing doesn’t seem to fit with Adora’s usual strategy, but detectives found a pair of bloody pliers in her kitchen, so it must have been her, right?); Camille and Amma go back to St. Louis and begin living together, and Amma finds a new friend in one of their neighbors; and Camille files her story for the Chronicle, which is ultimately a provocative first-person narrative about her time back in Wind Gap and how it affected her.

But the happy ending is too good to be true, as you might expect from a series this dark. Shortly after learning that Amma and her St. Louis friend, Mae, recently had their first fight (about “boys or nail polish,” Mae’s mom jokingly suggests), Camille finds in the trash a miniature quilt that Amma had been using on a bed in her dollhouse.

Camille brings the piece of fabric back to Amma’s room and places it on the doll’s bed… and that’s when she notices something strange. She steps closer to the dollhouse to examine it, then reaches in and pulls out a human tooth from underneath a tiny piece of furniture. She looks at it, aghast, then peers into the dollhouse again and realizes there are dozens of human teeth in there, each of them pressed down to be a tile on the house’s small bathroom floor.

Just then, Amma walks in and spies Camille in her room, holding up the tooth. Camille stares at the girl, horrified, and Amma whispers to her sister: “Don’t tell Mama.” (And as the credits roll, we watch as Amma — the real woman in white, it turns out — and her friends murder Ann and Natalie, an act that Amma eventually carried out solo on new friend Mae.)

OK, your turn. What did you think of the Sharp Objects finale, and the limited series as a whole? Grade both in our polls below, then hit the comments with your reactions to the final episode.