Warning: The following contains spoilers for Sunday’s Fear the Walking Dead. If you want to be surprised, move away from this recap as quickly as you would a walker.

Poor Morgan. In Sunday’s Fear the Walking Dead, he got the rare chance to take a dump in an actual bathroom — one that even had toilet paper and a copy of Toy Dog Monthly to read! But no, the fates wouldn’t allow him to do his business in peace. And by the end of the episode, we — if not he — had met a character whose malevolence seemed destined to make him s— whether or not he was anywhere near a toilet. Who’s the Big Bad? Read on… 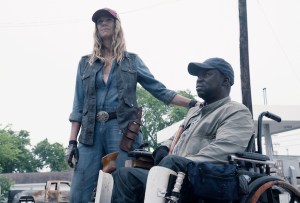 ‘SWEET SYRUP ON A SHORT STACK!’ | As “The Code” began, Morgan sought refuge from last week’s hurricane in the back of a semi that just happened to be filled with “Take what you need, leave what you don’t” boxes — meaning that, before he conked out for the night, he got to enjoy a feast of bottled water and one of his beloved peanut butter protein bars. (Score!) The morning after, the apparently very heavy sleeper awakened to find that he’d been driven all the way to a truck stop in Mississippi. As post-apocalyptic truck stops go, it was pretty awesome, too — well-stocked, the lights worked, and miracle of miracles, the john had TP. So, after filling his backpack with some essentials, Morgan hit the restroom… only to be interrupted by Wendell (Daryl Mitchell), a wheelchair user with a gun and a question. “All my life,” he said, “people like you been using stalls made for people like me… Why?” Morgan’s hilarious response? “It always seemed like a little apartment.” After the guys made their way out of the men’s room, they were joined by Sarah (Mo Collins), who quickly asked that Morgan forgive her brother for being so jumpy. Wait, brother? “We twins,” Wendell deadpanned.

So who were they? What was with this “Take what you need, leave what you don’t” stuff? According to the newcomers, before the world went sideways, they’d delivered the kind of care packages that they now left all over the highway. And afterwards? “When the road gets bumpy, you just keep on moving ahead in your truck,” said Wendell, prompting Sarah to remind him that he meant “Keep on truckin’.” In turn, Morgan revealed that he was headed to Virginia after he went back to check on some friends he has in Texas. “Had,” they corrected him, suggesting that Alicia, John & Co. couldn’t have survived the hurricane. “I lost Minnelli, my Bichon Frise,” Wendell offered so that Morgan would understand that “I know his pain.” The duo wouldn’t Lyft Morgan back to Texas, but they happily gave him supplies to take with him. As for them, “We got a code, and we keepin’ it alive,” said Wendell. “You gotta help people when they need that help, and then you gotta keep your truck movin’.” Again, Sarah chimed in, “Keep on truckin’.” I like these two. They’re funny. 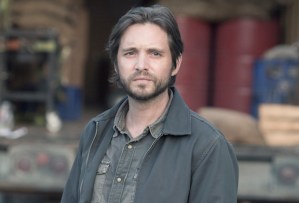 ‘YOU FOUND HIM… THANKS’ | Headed back to Texas, Morgan made it as far as a bridge that served as a metaphorical crossroads, struggled mightily with his conscience, then walkie-talkie’d Wendell and Sarah that the overpass that they’d been sure was clear — and was, in fact, clear — was out. So he’d be rejoining them. Upon making it to their rendezvous point, Morgan saw in the distance a guy with his hands tied and a hood pulled over his head running from walkers. After saving the hapless fellow from certain undeath, the guy, whose name we later learned was Jim (Aaron Stanford), greeted his rescuer with this priceless quip: “How long’s it take to run across a goddamn field?” (Gotta say, much as I loved Nick, I can’t remember him ever landing a joke.) No sooner had Jim explained to Morgan that he’d been trying to escape from would-be kidnappers who wanted his beer recipe than they met up with Wendell and Sarah, who — of course! — were the would-be kidnappers. (If you’re going to resort to abduction, you have to admit, access to beer is a pretty decent reason.)

Now that Wendell and Sarah’s halos had been knocked off, Morgan wanted to know who they really were — and what had happened to the guy whose “Take what you need, leave what you don’t” truck they were driving? Aw, don’t worry about him, they said. They left him back in Texas. “But we wasn’t a–holes about it,” Wendell insisted. “We left him the box.” Sarah wasn’t remorseful in the slightest. In this world, “if you can’t protect what’s yours,” she said, “it ain’t yours.” Anyway, they were now super interested in making their way to the settlement that Morgan had described in Virginia. And he, as you’d expect, wasn’t about to give directions to the lowlifes. They weren’t worried, though. They had a whole lotta miles ahead of them, and before they got anywhere near Virginia, they were sure that Morgan would change his tune. For his part, Jim — or Jimbo, as Wendell and Sarah were dying to rename him — only made it as far as the first pit stop before he proposed an arrangement that would get him untied. “Will I get beer?” asked Sarah. “All you can drink,” he replied. Deal!

‘HISTORY IS BUILT ON BEER’ | Even after riding around for a while with his hands tied, Morgan still wouldn’t disclose Rick and his old friends’ whereabouts. Or at least he wouldn’t until Jim accidentally knocked him down an embankment and he found himself unable to climb back up with his hands bound. As walkers trapped him on the roof of a car, he at last relented and gave Sarah and Wendell directions to Alexandria. So now, would they give him a hand? This being Jim’s first time out of his brewery since the rise of the walkers, he was ill-equipped to step in, he said. Wendell wasn’t about to roll down the hill. And Sarah… she didn’t pretend to even want to help. “You made it this long without us,” she pointed out to Morgan. Wait, he protested. Could they really just turn around and walk away? Sure, Sarah responded — just like he had. Yep, they knew that the bridge hadn’t really been out, so clearly, Morgan hadn’t been all that anxious to go help his friends in Texas. In other words, said Sarah, “Guess we’re not the only ones pretending to be something we’re not.”

That night, Morgan was still trapped on top of that damn car. At least he’d come up with a new tactic in hopes of getting a bit of assistance. “You don’t have to do this — you can come back,” he walkie’d, appealing to Wendell and Sarah’s better nature. When that got no response, Morgan decided to be honest. He didn’t cross the bridge, he admitted, because “I am a coward.” He knew that Alicia & Co. needed him but had been afraid that, if he went back, he’d only make things worse. So he just hadn’t gone back. That being the case, they shouldn’t return for him, he continued. However, “maybe I can ask you to come back just so I can do the right thing.” When that still didn’t elicit a response, Morgan took a flying leap off the roof of the car… which was all well and good except that it left him once again trying to get up that hill with his hands tied. He might not have made it, had he not spotted the pocket knife from the “Take what you need” box and used it to free himself. (So see, Sarah? Those boxes were doing people some good after all!) 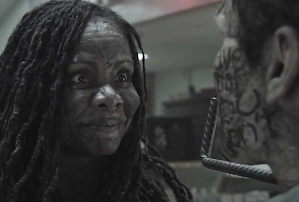 ‘HANG ON, WE’RE COMING’ | As the hour neared its conclusion, Morgan caught back up to Wendell, Sarah and Jim. The “twins” were peeved to have discovered that the exit Morgan had told them to take… didn’t exist. (Point for Morgan.) At any rate, now he was going back to Texas to follow in the footsteps of the “Take what you need” box guy and try to help. And if they’d give him a ride, he’d personally escort them to Virginia afterwards. Along the way, Morgan insisted on dropping off “Take what you need” boxes at mile markers ending in 4, just like the do-gooder had been doing. (Jim even got in on the act, leaving a beer in a box.) But as Morgan took to the walkie-talkie in hopes that the box guy would hear that they’d meet him “on up the road,” his sweet message was intercepted by a malevolent woman (Tonya Pinkins), who scrawled “Take what you need,” etc., across the face of a walker stuck to her wall. “It looks like we’re going to Texas,” she told Pervis, her zombie. And suddenly, I was remembering the Vultures more like Canaries.

What did you think of “The Code” and its new characters? Since I feel like there’s room in a zombie drama for a laugh now and then, I really dug ’em. How about you? And how creepy was Tonya Pinkins? Damn!