Sunday’s Fear the Walking Dead may well rank right up there with the series’ best. The emotional episode trapped Alicia during the storm with the last person on Earth that she wanted to be anywhere near, brought about a detente that would’ve been unthinkable even a week ago and, in the end, cast a long, ominous shadow over several of our favorite characters. Read on, and we’ll review every heart-wrenching beat.

‘GET THE HELL OUT, OR I’LL KILL YOU’ | “Close Your Eyes” opened with Alicia seeking refuge from the storm in a house so dark and gray, it could’ve been black-and-white. (Big props to the show for the clever way it had the incessant wind blow letters off of the credits. Unexpected, funny and cool.) After she dispatched the family that was — well, wasn’t — living there and dragged their bodies onto the lawn, she also tossed out into the rain all of their framed photos; clearly, they were too painful a reminder that she’d just lost her own brother and mother. After discovering that the basement was flooding, she heard a noise upstairs and found out that she wasn’t alone in the house: Of all people, Charlie was hiding in a bedroom! Unwilling or able to remain under the same roof as the kid who’d been the undoing of her family, Alicia tried to leave but, in the process, got knocked unconscious. When she awakened, she was pissed to realize that Charlie had brought her back inside. Well, whether the girl was going to keep playing the quiet game, Alicia had some things to say to her. 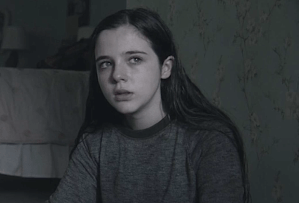 ‘IF YOU’RE NOT GONNA TALK, THEN LISTEN’ | Through the locked bedroom door, Alicia ripped Charlie a new one, ladling the guilt on with a shovel by reminding the kid of all that her lies had destroyed, describing Nick’s slow death and warning that, “if you’re in this house with me, I’ll probably kill you.” The thing was, Alicia wasn’t sure if she wanted to exact that vengeance. She wanted to be like her mother. But Charlie’s proximity might make that impossible. So Alicia twisted the knife some more. As Charlie took out her gun — the same one with which she’d taken Nick’s life — Alicia went on. “You may be a kid,” she said, “but you know what you did, and that makes you garbage… I hope you live to a ripe old age so you have to remember what you did, who you are… and how you can never, ever make up for it.” Needless to say, on the other side of the door, Charlie was in tears and looking scarily like she was ready to turn her gun on herself.

‘I’M TRYING TO DO THE RIGHT THING HERE’ | When Alicia went outside to nail down a shutter, she noticed that Charlie had lain sheets across the twice-deceased family. Ticked anew, Alicia flew upstairs to find Charlie’s door open and the girl drying the family photos she’d retrieved from the rain. “I put them there for a reason,” Alicia spat. Nonetheless, she needed a hand with the shutters. When her hammering started to draw walkers, she and Charlie retreated indoors again, and Alicia rather forcefully took the kid’s coat to dry it. Discovering the gun in her pocket, Alicia pointed it right at her face. “I told you you couldn’t be here,” Alicia said. “I told you I didn’t want to be around you.” After sending Charlie to her room, and not a moment too soon, Alicia found a dead bird in the chimney — a crushing Amina throwback — and told Madison, “I’m sorry. I’m trying.” Meanwhile, Charlie had climbed out her window onto the roof and seemed to be baiting a walker impaled on a nearby tree branch to bite her. He clearly would’ve taken that bait, too, had Alicia not intervened. Now she got it. The gun “wasn’t for me, was it? It was for you.”

‘YOU MIGHT HAVE HAD THE RIGHT IDEA’ | Though Alicia acknowledged that “there are no good reasons” left to keep going, “that doesn’t mean I’m gonna let you” off yourself. At last, Charlie spoke, to ask if Alicia had saved her to make sure she’d have to live with what she’d done. Whatever Charlie expected, or hoped for, in response, Alicia promised she wasn’t going to get it. Nevertheless, that night, they sat down to dinner together. Charlie even talked some more, asking whether when Alicia had lived in California, she’d lived on a beach. When the world fell apart, Charlie’s parents had been planning to take her to one in Galveston. Now, while she liked to close her eyes when reading and “see” what she’d just read about, she’d yet to stumble upon a book about Galveston. Later, after finding Charlie rearranging the family pictures again — in case somebody came back for them — Alicia told her, “Sometimes when you’re gone, you’re just gone, OK? And these people are definitely gone.” No sooner had Charlie asked, “Why do you care?” than a window was blown out, forcing them to seek refuge in the water-logged basement.

‘I DON’T WANT TO DIE’ | As fast as Alicia and Charlie made it downstairs, the violent storm trapped them in the basement by dropping debris on their only exit. Water up to their chests, Alicia assured Charlie that they’d get out. But the youngster was freaking. She had seen her parents after they’d turned and couldn’t bear the idea of ending up like them. Now, she couldn’t even recall what they’d looked like before. Still, Alicia refused to use the gun on Charlie to spare her that horrific fate. Even after holding the weapon to Charlie’s head and picturing Madison and Nick, no. Alicia couldn’t do it. Just then, something fell on the door, paving the way for the twosome to make their escape. It was the walker that had been impaled on the tree branch. “He saved us,” said Charlie. And, however accidentally, I guess he had. The following morning, with the storm in rearview, Alicia buried the family not for herself or Charlie, she said, but “for the people who could come back.” She even put a photo of the family in a jar nearby to identify them. 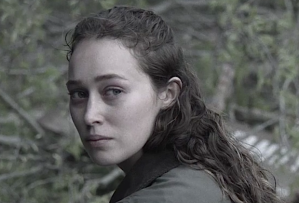 ‘SO YOU’RE GOOD AT FINDING THINGS?’ | As if the unlikeliest of friendships hadn’t already begun, Charlie then told Alicia, “I can see [Madison] in you, even if you can’t. She’s there.” And clearly, she was, because Alicia was feeling pretty bad about having walked away from Morgan, not to mention Strand and Lucy, during the storm. Since Charlie lived up to her rep as being “good at finding things,” she’d be glad to help search. En route back to the mansion where Strand and Lucy had been staying, Alicia told Charlie to close her eyes, and described the beach in such vivid detail that the girl even saw her parents alive and well. Alas, the hour ended on the downest of downbeat notes: Alicia and Charlie discovered the mansion a shambles, John and June’s bus overturned, and not one of them anywhere to be found. “They’re gone,” Alicia said, looking at the bus. “Charlie, things don’t get better. They’re only gonna get worse, though we’re not around to see how bad they can get.”

What did you think of “Close Your Eyes”? Alycia Debnam-Carey and Alexa Nisenson were all kindsa tremendous, no? Are you worried that any of the missing persons might actually be goners? Hit the comments.