It’s very possible that Trial & Error‘s Josh Segal and his ragtag legal team have worked their last case, seeing as the NBC comedy’s fate is still up in the air.

But did they manage to pull off one last victory?

In the final two episodes of Trial & Error‘s second season, Josh & Co. exhaust every option to prove that Lavinia Peck-Foster, and not Jesse Ray Beaumont, was responsible for the murder of Lavinia’s brother, Chet.

The good news? Josh begins to close in on Lavinia, thanks to leads from locals like Forge Clooney, East Peck tattoo artist Reverend Tats (“not a Reverend,” his chyron helpfully clarifies) and, oddest of all, Mickey Moose. The really, really bad news? Thanks to the tie pin-turned-camera that Lavinia gifted Dwayne last week, Lavinia is able to stay one step ahead of Josh and manages to kill each of his witnesses before they can take the stand.

Fortunately, once Josh discovers that Dwayne’s tie pin is feeding Lavinia intel, they’re able to resume work on the case without fearing for everyone in East Peck — and they quite literally strike gold by identifying some GPS coordinates that Chet had gotten tattooed on his back before he died. The coordinates lead to the center of Lavinia’s hedge maze, where Dwayne and Anne find a box full of gold bars. (As a fan of the S-Town podcast, which has been less subtly honored already in Season 2, I particularly enjoyed this shout-out of a twist.) 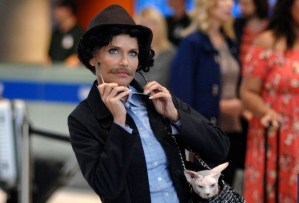 But wait! There’s more! Even though the gold itself would have been reason enough for Lavinia to kill her brother, there is an even stronger motive hidden underneath the box’s false bottom: letters from Lavinia’s long-lost son, Trig Peck, that prove Trig was trying to get in touch with Lavinia for years. Once Lavinia discovered that her own brother was keeping her from seeing her son, surely that made her snap, right?

Well… right! When Lavinia takes the stand the next day, Josh surprises her by bringing her son into the courtroom and letting him take the fall for Chet’s murder. But Lavinia can’t bear to see her son go down for her crimes, so she finally confesses to offing Chet — and after singing a lovely refrain of “A Bird in a Gilded Cage,” Lavinia is locked up. (Well, for one day, at least. She ends up busting out of prison, with the help of her house-boy, and escapes to Barcelona donning her Ronnie Del Mundo disguise.)

And in the end, Josh reveals that it wasn’t Lavinia’s son who appeared in the courtroom during the trial. It was merely Dwayne’s brother-cousin, Wayne, who played the part of Trig convincingly enough to get Lavinia locked up. (Like I said: for a day.)

* After trying her absolute hardest not to give birth right there on the courtroom floor — kudos to Jayma Mays for her riotous physical comedy in this finale — Carol Anne Keane finally welcomes a daughter, Princess Anne Keane. It turns out Josh isn’t the father, after all, and the baby really belongs to East Peck’s comatose mayor. But Josh adores the baby anyway, and he and Carol Anne end the finale with some heavy, heavy flirting.

* After confessing to her crimes, Lavinia tells Josh that she and her fellow Pecks helped rid the town of witches back in 1994. “Now that we’re gone, they’ll most certainly try to come back. And not the good kind,” she informs her former lawyer, with a wonderful nod to Kristin Chenoweth’s Wicked character, Galinda.

Josh doesn’t seem to buy it at first, but a voicemail left on the taxidermy office’s answering machine at the end of the episode tells us he should take the warning seriously: “Hi. I don’t know if you followed the witch trials of 1994. I need you to help free the East Peck Three. Those two boys need your help.” (Because only in East Peck does “three” really mean “two.”)

With that, I hand it over to you. What did you think of Trial & Error‘s Season 2 finale? Grade it in our poll below, then hit the comments to back up your choice!