In the wake of Wednesday’s announcement that The Big Bang Theory‘s upcoming 12th season will be its last, the cast and producers took to social media to thank the fans for their enduring support.

Series star Kaley Cuoco was among the first to react to the announcement. “Drowning in tears, we promise to bring you the best season yet,” she said on Instagram. “To the fans, our crew, families, Chuck Lorre, Warner Brothers, CBS and everyone who has supported us for so many years, thank you.”

At the end of 12 seasons, Big Bang will have amassed a whopping 279 episodes, making it the longest-running multi-camera sitcom in television history. Scroll down to read Cuoco’s statement in full, plus additional reactions from the cast and crew… 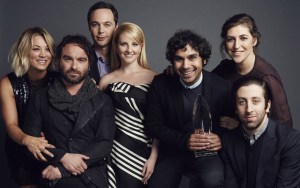 This ride has been a dream come true and as life changing as it gets. No matter when it was going to end, my heart would have always been broken in two. Drowning in tears, we promise to bring you the best season yet. To the fans, our crew, families, Chuck Lorre, Warner Brothers, CBS, and everyone who has supported us for so many years, thank you. We are goin out with a bang.

As you may already know… and for those of you who don’t. This will officially be Big Bang Theory’s last season. After Season 12 we will be the longest running multi camera sitcom in the history of television. There are no words in any language that can describe what my heart wants to say… The love that I feel for all of you is boundless. Without you the fans there would be no us. Tonight I sleep with a prayer of gratitude on my lips. This isn’t goodbye… yet… still 23 eps to shoot!

There are many ways to look at the dozen years of Big Bang Theory as we draw to a close, but for me it will be the family that gathered each week to create a true labor of love. I will treasure my Big Bang family to the end of my days.

We are forever grateful to our fans for their support of The Big Bang Theory during the past twelve seasons. We, along with the cast, writers and crew, are extremely appreciative of the show’s success and aim to deliver a final season, and series finale, that will bring The Big Bang Theory to an epic creative close.

The Big Bang Theory‘s farewell run begins on a special night, Monday, Sept. 24 at 8/7c, before a second new episode airs at its regular day and time, Thursday, Sept. 27 at 8/7c. Your hopes for the final season?