Daniel’s new beats weren’t the only things that had strings built into them in Sunday’s Insecure. Whether he or Issa could really acknowledge it (yet), there were also loads of strings attached to their living arrangement. And by the end of “Familiar-Like,” the old flames-turned-good-friends-turned-who-the-hell-knows were looking more couple-y than I can almost ever remember Issa and Lawrence looking. Were they actually a couple, though? Read on and find out. 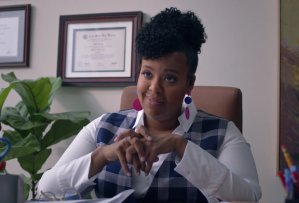 ‘YOU CONCUBINING?’ | After being rejected for apartment after apartment, Issa finally went for guidance to Kelli, who explained that the reason she kept being turned down was credit — as in, there are five basic credit tiers: “excellent,” “good,” “poor,” “bad” and “Issa.” So her only hope of moving out of Daniel’s was to get someone to co-sign — someone who isn’t her, Kelli hastened to say — or pay several months’ rent upfront. Luckily, Issa had been saving. Unluckily, it wasn’t nearly enough. As Kelli reviewed her pal’s expenditures, she couldn’t believe her eyes. “Radio Shack ain’t even a store no more,” she exclaimed. And was Issa really buying groceries at Rite Aid? “I buy panties there, too,” Issa admitted. When Kelli learned that Daniel wasn’t charging Issa — like, at all — to crash at his place, she advised her to keep letting him do so for as long as possible. In other words, “don’t look a gift horse in the d—.” Issa tried to argue that “that’s not a saying,” but “it is,” Kelli insisted. “My grandmother said it to me.” (How good is it to have Natasha Rothwell back on screen! Kelli makes every episode at least 30 percent funnier.) 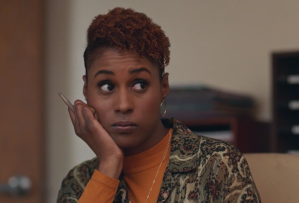 ‘IT’S NOT A HANDOUT, IT’S A HAND OUT’ | At a big We Got Y’All meeting to discuss the logo redesign, Joanne was even more defensive than usual. For instance, when it was pointed out that “it’s not great that there’s a white hand scooping up black kids,” the boss balked. “It’s not racist,” she said, “’cause it’s my hand.” For once, the team wanted Issa’s input. (Sure, now they want it… !) But, after fantasizing about really letting her colleagues have it, she just quietly said yep, yep, she agreed with everything everybody said. Later, over lunch with her co-workers, Issa — brown-bagging it to save every penny she could — asked if being the only African-American member of the group meant that she had to speak up about every issue. Maybe, she added, “I don’t want to be the voice of all black people.” Meanwhile, Daniel’s evolving sound got (kinda) a thumbs-up from niece Jada. “Your music be making me wanna think,” she said. Unfortunately, he couldn’t even get Spyder to show up at his studio to check it out. If he wanted to get to the “too-Hollywood” up-and-comer, he’d have to go meet him at Fais Do-Do, a club that Daniel’s frequent hookup Vanessa said was “so tired, it literally means ‘go to sleep.'”

‘IS THAT WEED IN THE TOASTER?’ | After being told by brother Ahmal that nope, she couldn’t move in with him and his boyfriend Cody, Issa bit the bullet, called Daniel and asked if she could stay with him for a couple more weeks. Maybe one, he responded, lying that Vanessa wasn’t cool with her crashing at his place. (In actuality, Vanessa seemed more put out that he kept sleeping over at her place.) Off that conversation, Issa took a chance and approached Joanne with the idea of adding to the We Got Y’All staff some more employees of color. That evening, when Daniel made a rare appearance at his crib, he found Issa trying to endear herself to him by cleaning the kitchen. But she soon found a better way to pay back his kindness. Sensing his reluctance to chase down Spyder at the club, especially solo, she offered to go with him. “You keep coming through for me,” she pointed out. “Let me do the same.” At Fais Do-Do, Daniel was irritated to find that his name wasn’t on Spyder’s list at the door — and at least that irritated when Issa got them past the bouncer by glomming onto Khalil, a former high-school classmate who’d become as successful a producer as Daniel… hadn’t. 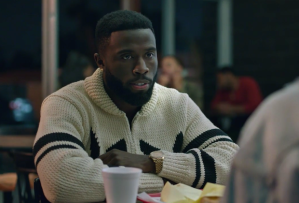 ‘YOU THIRSTY? JUST GENERAL MOUTH-THIRST… ’ | Inside the club, the sexual tension between Daniel and Issa thickened after he wowed her with his ideas for Spyder’s adjusted sound. Too bad the hotshot wasn’t nearly so impressed. After Daniel worked up the nerve to talk to Spyder, it didn’t look like Spyder was going to talk to him, at least not until Issa distracted Khalil from the A-listers’ chitchat. Even then, Daniel’s track record didn’t put him on Spyder’s list of producers that he just had to work with. When a brawl broke out and shots were fired, it had to be almost a relief to Daniel. At least that painful non-exchange was finished. Over chili fries afterwards, he lamented to Issa that, while he’d gotten good at what he does, Khalil had gotten famous. He could just imagine how his obituary would read, had he been hit in the shooting. “Unknown Soundcloud producer dead.” It was still better than the way Issa’s demise would be described, she retorted. “Lights out on debt-ridden Lyft driver with 3.6 rating.” At least Daniel had a passion, she added. And hey, why did it have to be a competition with Khalil? Why couldn’t Daniel take him up on his offer to collaborate? In the face of her practical supportiveness, Daniel — forgetting entirely the Vanessa excuse he’d made up — told Issa she could stay at his place as long as she needed. 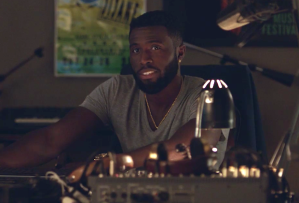 ‘N—-S ALWAYS SHARING THE WRONG NEWS’ | Back at Daniel’s, Issa was disheartened to see that the club fight/shooting was already blowing up on the internet… and then shared the video herself, too. She was happy, however, to overhear Daniel calling Khalil and arranging to get together. When he got off the phone, one thing (his uncomfortable couch) led to another (him giving Issa a shoulder rub) — but only one “another.” Despite their chemistry, the pair didn’t hook up or even kiss. “If you want, you can sleep in my bed,” Daniel told Issa. He’d be working late, so it was all hers. After she got a call back about the property-manager position for which she’d applied, she joined him in his studio rather than hit the sack. And in a lot of ways, the moment was even more intimate than if they’d actually had sex. So, what did you think of “Familiar-Like”? Were you relieved or disappointed that Issa and Daniel resisted the temptation to sleep together?