Monica Raymund’s departure from Chicago Fire may not necessarily spell the end of her character Gabby Dawson’s marriage to Matt Casey.

At the close of last May’s season ender, the couple had a huge fight, after which Dawson inquired about a volunteer paramedic job in Puerto Rico. Then five days later, Raymund announced that she was leaving the NBC drama after six seasons. “It is a big blow to the marriage,” showrunner Derek Haas tells TVLine as part of our Fall Preview Q&A. When Season 7 premieres (on Wednesday, Sept. 26 at 9/8c on NBC), a couple months have passed, and “the same frustration and lack of understanding that I think our audience is going through, so is Casey,” Haas shares. “It’s not going to be just one episode that he’s going to be dealing with the ramifications of her having taken this gig.” 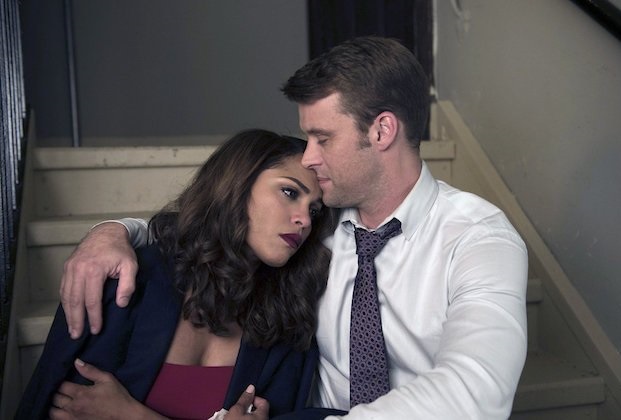 At the onset, however, one of those ramifications will not be the dreaded D-word: divorce. “A realistic thing happens sometimes when a partner in a marriage takes a long-distance job, and so then you have to deal with a new reality to your relationship. That’s what Casey’s dealing with,” Haas previews. “We actually did a lot of research about the modern long-distance relationship, and how those are dealt with and/or overcome and/or fraught with danger.”

It’s not a storyline that the writers intended for the new season, but after learning that Raymund would not be returning, “we had to adjust our plans greatly,” Haas confesses. “I was definitely caught off-guard that she was not going to come back. That’s not to say that she didn’t give us plenty of time, because she did. But in my head, that was all just end-of-year negotiating or whatever. I didn’t think that she really wasn’t going to come back,” he continues with a laugh.

Now that Haas has overcome his surprise at the exit, he’s enthusiastic about what’s in store and the possibility of a single Casey, should the couple go their separate ways for good. “Any time there’s a change in relationships for our characters, from a writing standpoint, it becomes exciting, because a slate gets wiped clean, and you get to come up with new stories and new ideas and generate new thoughts,” Haas explains. That said, “it’s a catch-22, because I liked them in a relationship, and I like exploring marriage and different facets of marriage, and things our viewers can relate to.”

Chicago Fire fans, how are you feeling about the future of “Dawsey”?