The future is looking not-so-good for one Chicago Fire couple after Thursday’s Season 6 finale, while another seems to be heating up.

Read on as we recap the latest bumps in the road for “Dawsey,” “Stellaride” and more. Plus, is Boden climbing up the ladder? 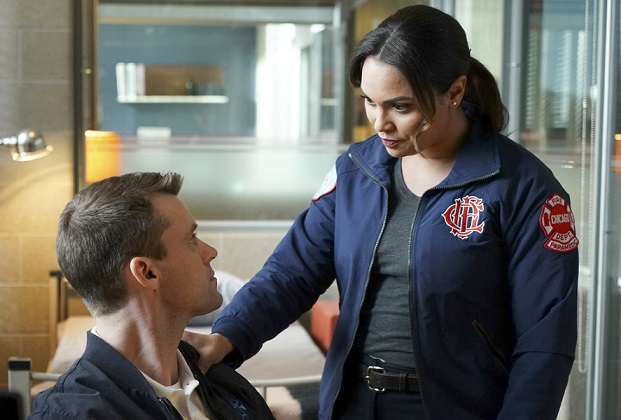 IN THE FAMILY WAY | Casey and Dawson are “burdened” with having lots of sex in order to try to get pregnant. After the pregnancy test comes back negative, Casey takes it as a sign that they need to double their efforts, but Dawson is thinking they should see a fertility doctor to speed things along. Unfortunately, the appointment reveals that Dawson has an aneurysm that could rupture during pregnancy – not that that’s going to deter the paramedic from having a family. “This is our time,” she tells Casey, who reaches out to an adoption consultant for an alternative option. Dawson squashes the idea, unable to risk another heartbreak like Louie. She is, however, willing to risk her own life, and as far as she sees it, it’s her choice.

“You make these big emotional decisions as if my input doesn’t matter,” Casey argues. Dawson insists his feelings do factor in, but she can’t be dependent on him, which confuses Casey. “This is one decision you can’t leave me out of. Either we’re in it together, or we’re not in it at all,” he responds. She argues that he knew who she was when he married her and then goes for a walk… all the way to Puerto Rico? (Earlier in the episode, Dawson was approached to join a team of volunteer paramedics to help out in the hurricane-torn territory. She explained that it wasn’t a good time — but now she wants to know more about the job.)

HERE COMES TROUBLE | Severide introduces Stella to Renee as his girlfriend! And he doesn’t even stumble over word! He then agrees to help Renee with her case, after which she suggests they meet at her place in the evening to talk it over. She needs to be home in time for son’s bedtime, she explains. Suuure. Surprisingly, Renee’s son Nicholas instantly takes to Severide, a total stranger. Perhaps seeing the life she could have had with the firefighter, Renee apologizes for how things ended between them. “I wasn’t in my right mind,” she says. “The way that I acted was unforgivable. I wish things had gone differently.” 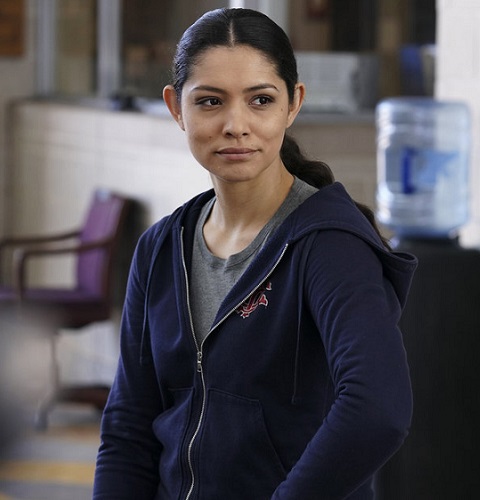 When Stella sees Severide playing with Nicholas, she gives Renee a stern talking-to: “I have got to give it to you for pulling out all the stops… Whatever you’re up to, I’m just going to warn you now — do not mess with Kelly.” And Stella was right to give Renee side eye, because the lawyer ends up kissing Severide after a courtroom victory. Stella’s spidey sense must be tingling, because she goes to Severide’s apartment and it’s empty. He’s actually waiting for her at her place. He doesn’t mention the kiss, instead saying that he congratulated Renee and then told her there was no reason for them to see each other again. “All I think about is you,” he assures Stella. 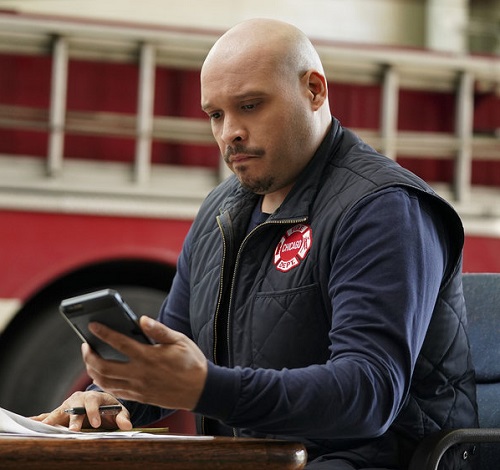 JUST FRIENDS | A chance encounter between Brett and good Samaritan Glenn, who handles equipment purchases for the Indianapolis fire department, leads to a potential Slamigan sell for Cruz. But when Glenn expresses a romantic interest in Brett, Cruz jacks up the price for the equipment. After Otis urges him to confess his feelings to Brett, Cruz starts planning a grand gesture.

Meanwhile, Brett is taking a tragic call pretty hard, leading to a dispute with Dawson. Cruz witnesses the heated exchange and reassures Brett that he’s there for her. “Your friendship means the world to me, Joe,” she says, to which he replies, “I feel the same way.” #FriendsZoned

THE NEW BOSS | Grissom takes out his anger at Boden’s bid for fire commissioner on Severide. “It’s my time!” he exclaims. “And you’re going to wish you hadn’t stabbed me in the back!” When a reporter asks Boden if he received a bribe, Casey, Severide and Boden suspect Grissom tipped off the journalist about the money that arrived at the station last week. Although the story is dropped, Boden loses the commissioner’s endorsement — but he gets a break when Otis discovers that Grissom has been tampering with his progress reports. Alas, it’s too late: The Mayor has appointed Grissom as the new fire commissioner.

Fire fans, what did you think of the season ender? Grade it via the poll below, then hit the comments to back up your pick!