Do things look grim for an NCIS: LA agent? Is a Resident role terminal? Will a Grey’s romance hit a baby bump? Read on for answers to those questions plus teases from other shows.

I’d love a Season 2 scoop on The Resident, preferably Conrad/Nic-related. —Colleen
Well, this major spoiler could be about one of them — but I really hope it’s not, seeing as the Fox sophomore is gearing up to kill off what sounds like a major character. “We really want people to get attached to all of these characters this season,” EP Todd Harthan tells TVLine, before cryptically adding, “because… not everyone survives Season 2.” 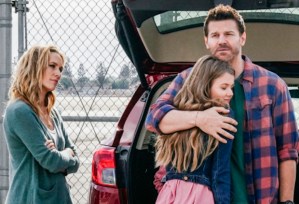 I was so impressed with the first season of SEAL Team. What’s next for the team? –Mark
Now that deployment is over and the team has returned home, it’s safe to say that Jason will have to deal with the new normal with estranged wife Alana — especially since Michaela McManus will be back for the Season 2 opener. “I had such a blast on that show,” she told me at the Upfronts, where she was promoting her midseason NBC drama The Village. “I love working with David Boreanaz, and I love that character and how they gave me some really great material. That show really gives you an inside look at what it’s like for their families that are left behind.”

Hi there! Any scoop on This Is Us? –Rebecca
At a red carpet event on Monday night, we asked EP Elizabeth Berger to tease one of Season 3’s funnier story points, and she said that Kate, “in her singing career, has some odd jobs we’re very excited about. We see her in different situations and Chrissy [Metz] is tackling them so beautifully.”

Any teasers for this upcoming Season 10 of NCIS: Los Angeles? —Tony
They say a picture is worth 1,000 teasers. Or something. So… there’s this, below. (Plus some actual words, from the logline for the Season 10 premiere, titled “To Live or Die in Mexico” and airing Sunday, Sept. 30: “Gravely injured and unable to communicate with the team in the U.S., Callen, Sam and Kensi, with an unconscious Deeks in tow, search for a safe way home as the Mexican Cartel places a “dead or alive” bounty on their heads.”) 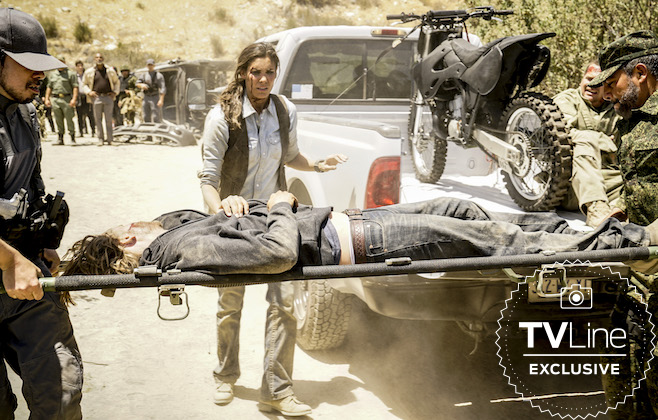 With the new season of The Gifted on the way, I know you have something to get me excited! What will make my jaw drop? –Keith
Caitlin channeling a chiseled Sarah Connor sends my jaw south, and it sounds like we’ll get a bit of that. As Amy Acker told me the other day, “We got the script for the first episode [of Season 2], and it said ‘Six months later, Caitlin’s face is hardened by grief, her body is hardened by six months of intense training’ — and I was like, ‘Uhhhh… someone could have mentioned that to me!,” seeing as she only had five days to get pumping some iron. As for the now-infamous rumor of Caitlin swinging some steel, “That has yet to come to fruition,” Acker clarified. “But I paid for sword-fighting lessons, so I feel like we’ve got to do something, right?” 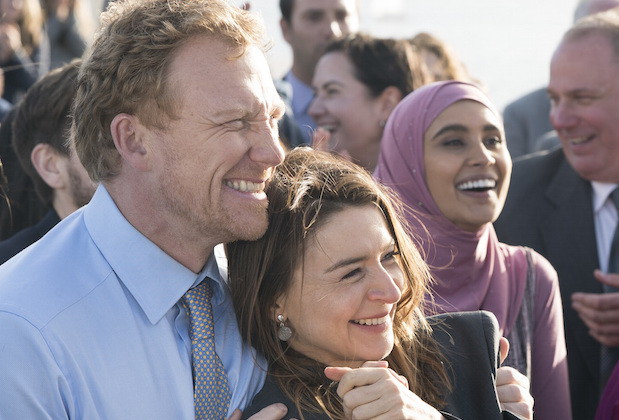 Anything on how Teddy’s return on Grey’s Anatomy will affect Owen and Amelia’s relationship? –Ellie
Heck, that is almost the exact question I asked Kevin McKidd when I saw him at ABC’s TCA party. “It’s the ‘Season of Love,’ they say, and love can be complicated. And it is going to be complicated for a while for Owen,” he shared. After all, “Owen has yearned to be a father, for years. It’s what broke him and Cristina up,” he reminds, “and it’s been the Holy Grail for him, to achieve that.” That said, learning that Teddy is carrying his long-awaited scion won’t be all warm fuzzies. “We haven’t played that moment yet,” McKidd said, “but the reality is that the last time we saw them together, she basically said, ‘I never want to speak to you again! We’re done as friends and everything’ — and he deserved it! So, I think it’s going to be fun.”

Good Behavior is a great show, so why hasn’t TNT given an answer on whether it’s coming back or not? –Christopher
As recently as May, TNT chief Kevin Reilly said that he couldn’t foresee “multiple” more seasons, though he did hope to “properly bring [the series] to a conclusion.” Now, three months later, I am hearing the show‘s fate is… still “in flux.”

Any chance you have scoop on The Flash’s 100th? –Chris
I thought CW boss Mark Pedowitz would for sure come to TCA with a vittle to throw us, but my fishing expedition came up empty. And though he for a hot second suggested that Episode 100 would be The Flash‘s contribution to December’s crossover event, I have since confirmed that what Comic-Con told us holds true — that milestone hour will precede the three-way mash-up. 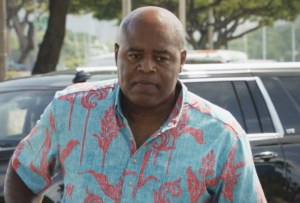 Any scoop on what to expect from Hawaii Five-0 Season 9? –Justin
This season’s Thanksgiving episode comes to you from the keyboard of series costar/new Writers Guild member Chi McBride, “and that’s a big deal for us,” showrunner Peter M. Lenkov notes. “Chi called me up and said, ‘I have this thing…,’ and I said, ‘Write it!’ We met a couple of times and he turned in a great script.”

Gimme all that you can on Good Witch! —Alyssa P
We caught up with Catherine Bell at TCA, where she noted, “There’s supposed to be a wedding in the Halloween special” airing Sunday, Oct. 21. “But I’m not sure… We’ll see what happens!” As for what the recently ordered Season 5 holds, “We’re just starting up again in a couple of weeks, so I don’t have a lot of information yet,” she hedged. “I know that the Halloween special is always my favorite. It’s what the show is about, so I’m excited about that.”

Who will be the main villain of The CW’s Legacies? —KoS
We don’t necessarily have a name — or even a species — for Legacies‘ first major villain, but series creator Julie Plec promises it’s coming. During the show’s informal TCA Q&A, she confirmed that “there is definitely an overall Big Bad that we slowly hint at.” In the meantime, “We’re doing something … that I have never done before, which is embracing, not always, but often, a Monster of the Week.”

Is there any news on Season 4 of Angie Tribeca? I know it was renewed, but it’s been well over a year since the last episode aired. –Jennifer
As noted in TVLine’s “Missing Shows” round-up, Angie will be back “in 2019.” 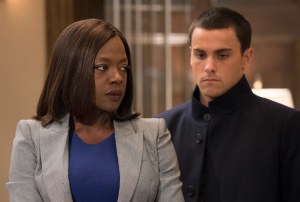 What can we expect from Season 5 of How to Get Away With Murder? –Leor
“Oh my gosh – the first episode is like a return to form,” ABC entertainment chief Channing Dungey raved to me at TCA. “ Like, I felt the same way reading it when I first read the first script of Season 1.” Which is not to say, as I hoped/suggested, that the Iconic Twirling Cheerleader is back. Rather, “The twist and turns come at you right away,” Dungey said. “I think people will be really excited to see how the mystery unfolds this season.”

Any scoop on Marvel’s Runaways? –Michelle
The Karolina/Nico relationship that sparked at the close of the Hulu series’ freshman run “is, in a large way, the emotional core” of Season 2, co-showrunner Josh Schwartz says. And yet the freedom the girls now enjoy might just flummox them a bit! “They both sort of declared themselves to each other,” says co-showrunner Stephanie Savage, “and now they’re in a situation where they’re living without their parents but they’re living with the rest of the runways in the same house — which is a pretty quick advancement of a new relationship for young people. They’re going to be struggling not just with trying to save the world, but how to have an appropriate teenage relationship in such an adult situation.”

Real questions from real human beings get real answers! If you need the Inside Line on a favorite show, email InsideLine@tvline.com! (With reporting by Vlada Gelman, Andy Swift and Diane Gordon)