If ever anyone needed to do what Insecure’s Molly would call some “blooping, blipping and blapping,” it was her bestie, Issa. In the HBO dramedy’s Season 3 premiere, she was still crashing on Daniel’s couch (and doing her damnedest not to hear the noisy sex he was having a room away) and working as a Lyft driver to supplement her income from We Got Y’All (where she was now little more than a glorified intern). At least by the end of “Better-Like,” we had a glimmer of hope that one aspect of her life might soon get… well, better-like. Which aspect? Read on.

‘WE CAN’T ALL SWITCH JOBS AND TAKE VACATIONS’ | Early on in the episode, Issa asked Daniel if he’d known she was home the previous evening, when he and his date had been doing their best simulation of porn-flick sound effects. “Yeah,” he said. And that was that. At We Got Y’All, Issa was given the thankless task of making calls to check on the schools that hadn’t yet dropped the program. Frieda had been supposed to ask Joanne about getting her pal back in the field, but since she’d only recently been promoted and the boss was so negative lately that she’d been rechristened “Noanne,” she hadn’t. Issa understood, she said. Which of course loosely translated to, “F—.” Later, Issa gave a ride home from the airport Molly, fresh from vacation, looking like “a brown crispy M&M” and eager to razz her BFF about her side gig. “I enjoy a silent ride,” she teased before handing over a souvenir of her trip to the tropics: a jar of sand that had reminded her of Issa’s “dry-ass” you-know-what. 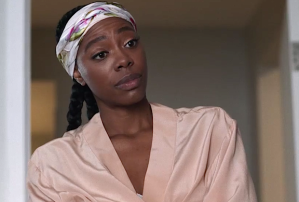 ‘IT’S NOT LIKE THAT WITH US’ | Over lunch, Issa confided in Molly that she felt as if her whole life was “on tiptoe s—.” Molly, in turn, bragged that she had moved on to “some next-level s—.” Not only had she kept her holiday bay on holiday, she’d kept Quentin in Chicago and was tackling contract negotiations with her new law firm. But, um, yeah, she was still hooking up with Dro. And her conflict about it hadn’t shrunk a bit. In fact, after a call from Candice interrupted their couple-y morning following a sleepover, Molly told her married lover, “We need to decide whether we’re friends who don’t have sex or acquaintances who just have sex; anything otherwise is muddy.” Off her suggestion that they hook up without the sleepovers and pancakes for breakfast, he agreed… then didn’t budge from the bed until he realized, “Oh, you mean like now?” Yes, Dro. Now.

‘OF ALL THE PLACES SHE COULDA STAYED… ‘ | Following a recording session with a godawful (but supposedly connected) singer brought in by buddy Brett, Daniel dropped by (his sister? babymama? friend?) Lillian’s to pick up his guitar — and left with a big question mark over his head: Why, Lillian asked, was Issa still crashing at his place? And, for that matter, why had she chosen his place to crash in the first place? That night, Daniel seemed to have come to the conclusion that Issa has picked his couch on which to surf because she really wanted to restart things between them. But when he tried to kiss her, she reminded him that “we know better.” Confused, he challenged her to explain why she was staying with him and not someone who’d just been a friend. She needed a place, she replied, and his apartment was close to her work… and, no matter what else they’d been, they’d always at least been friends. 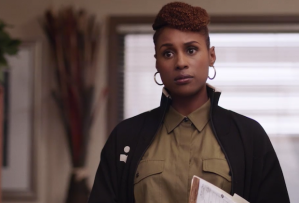 ‘Y’ALL L.A. CHICKS BE WILDIN’’ | At We Got Y’All the next day, Issa’s checkup calls sparked her curiosity about why the program was being dropped so often. So she began phoning schools that had already bailed on it, then brought to Joanne the upsetting feedback she’d received, about everything from the racist logo to the fact that the staff is largely white “and mean.” Rather than get patted on the back for her initiative, Issa got called out by her boss for overstepping. Every time there’s an issue around there, Joanne added, Issa was involved, so if she wanted to get to the bottom of something, she could just start there. Meanwhile, Dro asked Molly to celebrate her successful contract negotiation with him. What? “Acquaintances celebrate,” he argued. And, having the same amount of willpower where he was concerned as I do around a tub of ice cream, she agreed.

‘NO TIP BUT FIVE STARS’ | While getting ready for her let’s-pretend-this-isn’t-a-date with Dro, Molly got a call from Issa, who couldn’t go to Daniel’s because he’d forewarned her that he’d be, er, entertaining a guest. So didn’t Molly want to ride around and be Issa’s Lyft co-pilot? “I can get snacks and turn it into a party Lyft,” Issa offered. And it was a good thing Molly said OK, too, because Issa was already right outside her place! Unfortunately, Molly soon wished she’d RSVP’d no to the party Lyft. Yes, Issa had Capri Suns, but only for passengers. “This party sucks,” Molly grumbled. Their first fare was a couple of girls who could’ve been them a few years ago. (One even noted that Issa reminded her of her auntie — ouch.) But things started looking up when the duo picked up a smoldering hottie named Nathan. And he seemed like a good guy, too — he even got into it with another passenger who lit a joint and ignored Issa when she said, “Excuse me, sir, can that not be happening?” Then, however, Nathan ran for it rather than risk getting in trouble for fighting in the backseat. 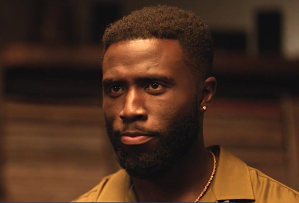 ‘JUST BE REAL’ | When finally Issa got home, she was pissed at Daniel for never texting her back when he and his date were done. And part of her was pissed that he was having all these dates, too, she admitted. “I know I said I didn’t care, but I do, and I still have feelings for you.” If Daniel had thought he was confused before, he really was now. “I came here,” Issa explained at last, “because I knew you’d be here for me, and I really need someone like that in my life right now.” Mmkay, but should that someone really be Daniel, Issa? Meanwhile, Molly was surprised when Dro let himself into her place and, in response, asked for her key back. When he challenged her to figure out what she wanted, she did just that: “I know I want my key back,” she said. And that, it appeared, put the final nail in the coffin of that nomance. As the episode drew to a close, Issa discovered that Nathan had left her a $50 tip — he needs to come back, pronto — and Daniel thoughtfully went out for his hookup. “See you later, roommate,” he said. In response, Issa sincerely thanked him… for everything.

So, what did you think of “Better-Like”? I loved it but can’t abide any episode that doesn’t feature Kelli! Also, I miss Lawrence (yes, already). Grade the premiere in the poll below, then hit the comments with your reviews.