Sunday’s Sharp Objects took viewers inside Wind Gap’s Calhoun Day, a twisted celebration of the town’s Confederate past, in which on-edge locals engaged in gossip, paranoia, a suspected kidnapping and a beer-soaked brawl.

But what series star Chris Messina remembers most about filming the episode was the unrelenting heat. 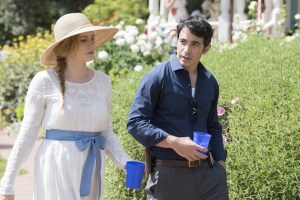 “You’re in the sun,” he tells TVLine on a recent morning at a café slightly north of Houston Street in New York, “and you’re drinking O’Doul’s, so you’re really bloated and gassy, and you’re going to pass out. That’s when you need to laugh.”

As he remembers it, the sun was strong. The on-set ambulance was at the ready. Series star/producer Amy Adams rented an ice cream truck to offer sweet, temporary relief. Still, high temperatures eventually turned Calhoun Day into a shrinking affair.

“Every day, the background actors became smaller and smaller,” Messina says. “Some of these people at first were like, ‘Oh cool! An Amy Adams TV show! Where’s Amy?’ And then, by Day 2, you’re like, ‘Where is the background [actors]?.” He chuckles. “And then by the third day, there were like 10 people.”

The episode forwarded Camille’s (played by Adams) investigation into who might’ve killed two young girls and offered a wallop of a scene in which Adora sweetly told her oldest daughter that she never loved her… which in turn drove Camille straight to Richard’s hotel room after dark.

Read on as Messina offers his take on this latest development for his stymied Kansas City detective — as well as how the hour’s sex scene might affect what happens next. 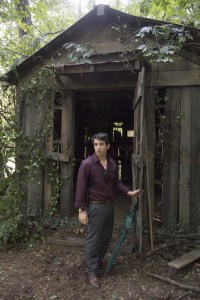 TVLINE | We’re five episodes into the season, and we still don’t know a lot about Richard. Were you given a backstory for him? Did you create one for him?
There was no backstory I was given, but I really wanted that character to come to the town with his own baggage. I felt like he was the flipside of the same coin that Camille’s on. He’s not in the kind of pain she’s in, but he understands that kind of pain and he has his own heartbreak and needs. He wants to be seen and heard. So it was important that he connect with Camille because he wants information, because he’s an outsider and because she has made herself an outsider and they can dance around the case.

Obviously he’s attracted to her, but I think there is also a chemistry between them that they are similar in ways. They are broken in ways. I tried to bring that in and infuse that into my stuff. But yeah, my stuff is really about trying to solve this case, and then it becomes trying to solve her.

TVLINE | Episode 4 shows their first very sexual encounter — he goes to kiss her, and she stops him but then puts his hand in her pants.
Yeah.

TVLINE | They later kiss, but it’s hard to tell what Richard is thinking throughout all of this.
He doesn’t have his footing to how much he’s starting to like her. I think he thinks he has a handle on it. [In later episodes], he thinks he has a handle on it, and then is surprised on how much he doesn’t have a handle on it. [Laughs] I think there are attributes about him that would make him a good detective, and there’s certainly several attributes that would make him a bad detective. I mean cozying up to the reporter is kind of 101, what not to do.

Maybe he’s going to be a better detective after Episode 8 maybe, [Laughs] but I liked it about the character. I like the flaws of all these people.

TVLINE | Camille is emotionally walled-off from just about everyone. Do you think that’s part of Richard’s attraction to her?
Yeah. She’s beautiful. She’s smart. I think it’s that cliché of, “I can save you.” She’s mysterious to him. Also, again, there’s a borderline of manipulation like, “If I flirt with you, maybe you’ll give me something [I can use in the investigation.]”

But it turns. I like the sexual stuff in this piece because it’s not just showing nudity because we want you to, you know, tune in. It’s not very sexy. It’s a relaxed intimacy. It’s really everything that was written. Everything that happens sexually in the show was written in the stage directions, and it’s all character driven stuff. And it’s so telling about control, power, who wants to be seen, who doesn’t want to be seen. I loved it and I thought it was really telling.

TVLINE | The sex scene they have in Episode 5 was so interesting to me. The way it played out, her desperation not to be seen — you don’t see a lot of that on television.
That’s what I love about the show. The book was this way, and the scripts were this way, and then all of what they wanted us to bring was really all the reasons I wanted to become an actor in the first place.

It’s character-driven, atmospheric. It takes its time. It’s not afraid to go slow and develop. It’s really an eight-hour movie. If I wasn’t in the show I would honestly — and there are plenty of things I’ve done that I wouldn’t say this about — but I would honestly be like. “I wish I was in that show.”

I mean so I’m lucky. Amy fought for me to be in it. I wouldn’t be talking to you without her whole friendship. I think she wanted people around her that she felt safe with. It’s a very painful character, obviously, that she plays. So there’s a bunch of us that she was friends with before, during, and now after, and she wanted that common shorthand. 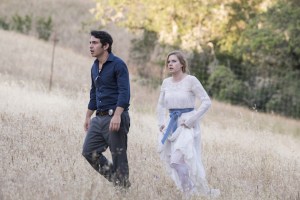 TVLINE | This is a heavy show. What was the atmosphere like on set?
There were some days that were so dark, in that we were just cutting for a few moments while something changed a little bit, that it remained pretty instilled and sad. And then there were a lot of times where, like, we had to just shake it up and laugh and be stupid because it was so dark, you know. Amy can be silly, which is fun.

She should do, a big broad comedy one day, because she’s really funny and then you know Patty [Clarkson]’s really funny. Elizabeth Perkins and Matt Craven are really a funny bunch of people, so we would f–k with each other. And certainly those sex scenes. We would just make fun of each other. It’s kind of sometimes the only way to get through it.

TVLINE | Were you fully naked there?
In that scene I was, yeah. I think there was no other way to do it. Also, the way [director Jean-Marc Valée] shoots, you don’t know where he’s going to be. So, you know, you don’t want to ruin the shot by having that G-string on screen. [Laughs] But again, that sex scene is very telling. [Richard]’s like, “You’re here. I want you. And you know I’ll do anything you want me to do. I’m really desiring you.” And she’s like, “You’re going to play by my rules, and he’s like, “I don’t understand her…”

I think, in that particular scene that he must’ve felt some of the scars, you know.

TVLINE | It would be difficult not to feel the scars on her arms, right?
We talked about that. Because it’s after that, in [Episode] 6, he starts kind of going heavily down the Camille investigation. And I think a part of that is the scars on her body.