Jimmy McGill is reeling from tragedy as Season 4 of Better Call Saul opens… but has the last thread of pre-Saul Goodman decency within him already snapped? 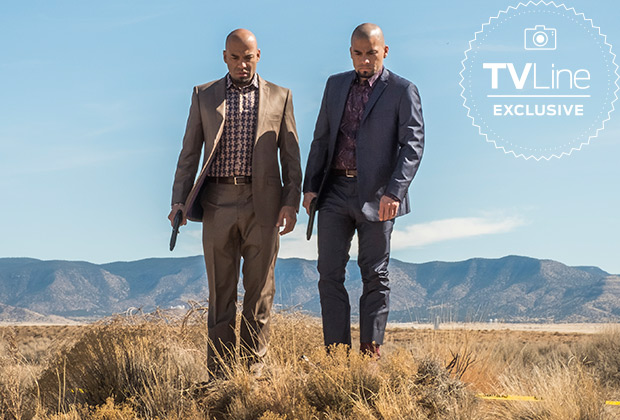 The season starts, as they all do, by checking in on Omaha Cinnabon manager “Gene” with another black-and-white flash-forward. Last we saw Gene, he was passed out on the floor, and here, we see paramedics revive him and take him to the hospital. His heart rate quickens when he notices a cop lingering near his bed, but the doctor tells him he didn’t have a heart attack and sends him home. Just as Gene is about to make a clean getaway, though, he gets called back by the receptionist, who wants a closer look at his driver’s license. The computer keeps kicking his information back, she says, and Gene starts to sweat as he gives her an obviously phony social security number. Finally, she lets out a relieved laugh: She typed an “O” instead of a zero, so that explains the error. He rushes out of there and into a taxi… but the cab has an Albuquerque Isotopes air freshener, and the driver is eyeing him intensely. (A hired thug who knows his true identity?) He throws some cash at the guy and ditches the cab to walk home — and his heart rate is back up again.

Back in good old ABQ, we see embers flying through the air — a reminder of Chuck’s fiery demise in the Season 3 finale — as Jimmy and Kim snuggle blissfully in bed together. Jimmy gets up and starts his morning routine: feeding the fish, making coffee and circling help-wanted ads in the newspaper. He gets a call on his flip phone from Howard, but ignores it to fetch a cup of coffee for a still-injured Kim. Howard leaves an urgent message on Kim’s machine, though: “It’s Chuck.” Jimmy and Kim speed over to Chuck’s house, just in time to see the house’s charred remains… and the coroner’s van driving away. 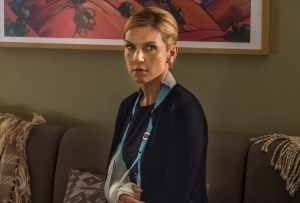 Chuck died of smoke inhalation, the fire chief tells Kim, so he didn’t suffer, but that’s not much comfort to a stunned Jimmy. He notices that all of Chuck’s electrical appliances are piled up in the backyard, and says he seemed fine just a few days ago: “Something made him relapse.” Jimmy is still lost in thought when Howard calls later to run his glowing obituary of Chuck by him. Jimmy’s not listening as Howard rattles off Chuck’s many accomplishments, and Kim has to take the phone and tell Howard it’s fine. She tries her best to cheer Jimmy up by breaking out a bottle of Zafiro Añejo tequila. But after a few shots, she’s passed out on the couch… and Jimmy is still awake, staring into the distance.

At Chuck’s funeral, a stoic Jimmy barely reacts when friends stop by to offer their condolences. When he and Kim arrive back home, they’re met by Howard, who looks stricken. He’s still troubled by how Chuck died: “I don’t think what happened was an accident.” What’s more, he blames himself, since he was the one who forced Chuck out of the firm after their fight over the spike in HHM’s malpractice insurance rates. (A spike Jimmy deliberately caused, you’ll remember.) “He always seemed so strong,” an emotional Howard laments. “But he wasn’t.” And here’s where you’d expect Jimmy to break down and weep over his brother’s death… but nope. He coldly tells Howard that the guilt he feels is just his “cross to bear,” then happily walks over to feed his fish. Uh-oh… was Chuck’s death the final straw? Has Jimmy finally — and fully — crossed over to become Saul Goodman? 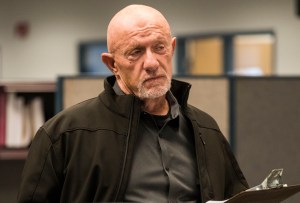 * Mike has traded in his toll-booth gig for a job working for Gus Fring, proudly telling his daughter-in-law he can help watch Kaylee now: “I make my own hours.” But you can’t teach an old snoop new tricks: Once Mike gets a fat paycheck from Madrigal Electromotive, he sniffs around for an address and swipes a floor supervisor’s ID badge to tour the Madrigal facility. He takes his time looking around — even chiming in when two co-workers argue over whether Muhammad Ali could beat Bruce Lee in a fight — before returning his stolen badge and barking at Madrigal’s security chief about how terribly lax the building’s security is. He announces himself as the new “security consultant”… and gives Lydia’s name as a reference.

* We see the aftermath of Hector Salamanca being carted away in an ambulance in last season’s finale: Nacho is about to dump the pills he gave Hector down a storm drain when Gus tells him, “Juan Bolsa wants to see you.” In a dark Los Pollos Hermanos warehouse, Juan Bolsa tells Nacho and Gus that Hector had a stroke, but “Salamanca territory stays Salamanca territory.” It’s business as usual while Hector recovers, he tells Nacho: “You do this right… things could go very well for you.” Later, though, Gus warns Bolsa that Hector’s ill health could invite a rival gang to make a power play, leading to “war,” and then “chaos,” and then “the DEA.” Plus, Nacho finally chucks Hector’s pills into the river… as Gus’ henchman Victor watches from afar.

* Chuck’s middle name is Lindbergh. Of course it is.

Give tonight’s Better Call Saul premiere a grade in our poll — and then hit the comments to share your thoughts on Jimmy’s transformation.