Better Call Saul wrapped up its third season with some big life changes for Jimmy and company… and a very grim cliffhanger for one character in particular.

BE KIND, REWIND | Kim is pretty banged up after last week’s car crash: her face bloodied and bruised, her broken arm in a cast. Jimmy picks her up from the hospital, and valiantly tries to collect all the Gatwood Oil documents that scattered when she crashed, but that’s a losing battle. He fixes her breakfast the next day, and suggests they sublet the office, so she could work from home. Even with the Sandpiper money, Kim asks? “I don’t give a s–t about the office,” Jimmy firmly tells her.

Francesca visits Kim to offer her support, in maybe not the most helpful way: “People die on that road all the time.” (Gee, thanks!) She also tells Kim she could still work the Gatwood case, with a little rescheduling. Kim starts frantically leafing through her day planner, slipping back into Super Lawyer mode… but then she stops herself. She tells Francesca to cancel Gatwood and push everything else back, then treats herself to “Relaxathon 2003” with lots of snacks and a stack of DVDs from Blockbuster. I love Relaxed Kim, don’t you? 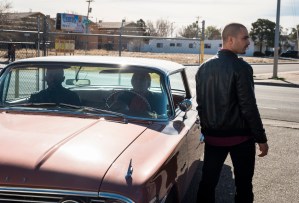 DON HECTOR IS DOWN | Nacho brings Hector to his dad’s car-upholstery shop and shows him around, and when Hector spots Nacho’s dad, Nacho reluctantly introduces them. Hector tries to win the dad’s loyalty by laying out stacks of fifty-dollar bills, but Nacho’s dad lashes out, telling Hector to get out before Nacho can calm him down. Dad eventually relents and takes the money, but Hector tells Nacho, “I don’t trust him” — which, when it comes out of the mouth of Don Hector, sounds like a death sentence.

Nacho isn’t about to wait for the pills to kill Hector: He follows Hector at night with his gun drawn, ready to finish the job. But before he can, he gets roped in to backing Hector up, with Gus and Bolsa arriving. Bolsa informs Hector all of the drug running will go through the chicken trucks from now on… and Hector doesn’t like that one bit. He screams at Bolsa, “The boss can suck me!” He flies into such a rage that he has another attack, and before he can reach his pills, he collapses. Gus rushes to administer CPR, telling the others to call 911. And Nacho quietly scoops up the pills Hector spilled on the ground…

When the ambulance arrives, Nacho tells the EMT that Hector was taking these pills, handing her a bottle. But was it the same bottle Hector was holding? Gus must have the same suspicions, because he’s eyeing Nacho the whole time. Does he know what Nacho is up to? At least Nacho survived Season 3 — an outcome that was very much in doubt heading into the finale. 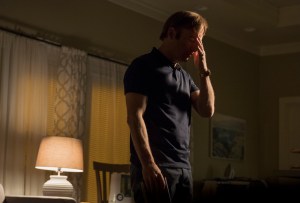 UNBURNING A BRIDGE | Jimmy feels terrible for what he did to poor Irene, trying to cheer her up with a cake and balloons. But when he suggests she use her settlement money to take a cruise with her friends, she doesn’t think anyone would go with her. And Jimmy finds her Sandpiper friends are still holding a grudge against her, even though she did what they wanted and settled. He tries to bring them back together, but nothing works.

Jimmy comes up with a last-ditch solution: He volunteers to lead the Sandpiper ladies in chair yoga when Erin from Davis & Main barges in. She leads him outside and yells at him for manipulating the ladies into settling, and he admits it, complaining about having to listen to the women’s “insipid feelings” and trashing them — all while he’s still wearing his chair-yoga microphone. When he goes back in, the ladies leave in disgust. But of course, it was all a ploy: Erin agreed to play along, as long as they drop the settlement and go back to court. It’ll cost Jimmy a cool million… but at least Irene has someone to take a cruise with now.

Kim and Jimmy solemnly move out of their law office, and have to let Francesca go. He ditches his Rolodex of senior clients, too, thinking he’ll have to rebrand when his law license kicks back in. But Kim assures him they’ll get another office together one day, and a better one. So, a happy ending? Well, maybe not… 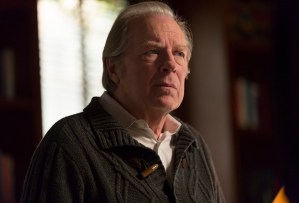 UP IN SMOKE | This week’s cold open is short and bittersweet: a flashback to a young Chuck patiently reading a story to a young Jimmy in a tent pitched in the backyard. And he reads that story… by the light of a buzzing lantern, of course.

Back in 2003, Chuck faces Howard and an army of HHM lawyers, offering them a solution to his threat to sue them out of existence. Rather than go to court or negotiate a costly buyout, he suggests they just go back to the way things were, with him as partner. He offers Howard a handshake… but Howard eyes his hand like it’s dripping with raw sewage. He hands Chuck a check for $3 million, the first of three payments. And it won’t bankrupt the firm, either: Howard’s paying out of his own pocket, with some loans on the side. “You won,” he tells him. He walks Chuck out, telling the whole firm Chuck is leaving. Chuck plasters on a fake smile as they applaud him… but he and Howard glare at each other as he leaves.

Jimmy visits Chuck to make sure he’s OK, and marvels at seeing so many electrical appliances on and humming: the fridge, some lamps, a turntable, the works. Chuck points to all the devices as proof he’s fine, and Jimmy offers a semi-apology, admitting he could’ve made different choices. Chuck can’t understand why, though: “You’re just going to keep hurting people… that’s what you do.” He doesn’t think Jimmy’s capable of changing, and wishes he’d just embrace his lack of morals already. Then he delivers the final blow: “You’ve never mattered all that much to me.” Jimmy sadly shows himself out.

But Chuck’s not as well as he seems. He gets up one night in a panic and shuts off all the fuses in the house, cutting off all power. But he sees the next day that his power meter is still running. He calls the electric company to complain, he unscrews every light bulb in the house… but still, the meter edges forward. Then he really goes off the deep end, taking an axe to his walls and feeling around for any source of electricity. He tears out kitchen tile, yanks out wires… but still, the meter keeps going. He finally takes a baseball bat to the damn meter. Well, that stops it, finally.

Chuck’s not done yet, though. The last we see of him, he’s huddled up in his house, holes in every wall, all electrical devices thrown into the yard. Wrapped up again in his Mylar blanket, he kicks at a lantern that sits in front of him on his desk… until the lantern topples over and starts a fire.

(Note: AMC hasn’t officially renewed this show for a fourth season yet. But after a finale like that, they just have to, right? Right?!?)

Alright, Saul fans: Give the Season 3 finale a grade in our poll below, then share your post-finale thoughts in the comments.