With the Season 3 finale fast approaching, this week’s Better Call Saul had big consequences for Jimmy and Kim, as their career paths veered sharply in opposite directions. (“Veered” being the operative word.)

Jimmy’s still hustling for cash with his law license suspended, and he zeroes in on former client Irene, from the Sandpiper Crossing lawsuit. He butters the old lady up with cat-shaped cookies, then quickly shifts to quizzing her about the status of the suit. She’s the class representative, which means it’s up to her when they settle, but she says Davis & Main is advising them to hold out for more money. Jimmy’s eyes bulge out, though, when he gets a look at the current settlement offer. He calculates his share would be a cool $1.16 million… and all those zeroes send him into Saul Goodman mode.

He urges Howard to settle the suit, but Howard sees right through him, accusing him of begging for money: “Next time, why don’t you bring a tin cup?” So Jimmy hatches an elaborate scheme: He cozies up to Irene, “bumping into” her while mall-walking — in a ridiculous all-white tracksuit — and offers her a free pair of the snazzy new sneakers he just bought. But he also cozies up to her retirement-home pals, hinting that they could all be receiving fat settlement checks right now if she would just pull the trigger, but “maybe Irene doesn’t need the money,” pointing out her fresh new kicks. What a snake! 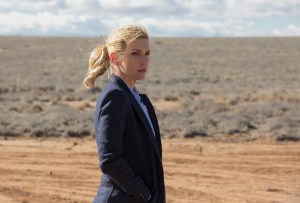 Meanwhile, Kim is running herself ragged trying to represent Gatewood Oil, run by the friend of the Mesa Verde guy who recommended Kim so highly. She meets the Gatewood boss, who’s locked in a land-boundary dispute involving his oil wells, and she thinks she has a solution. He tells her she only has two weeks to wrap up the case, but she insists she can get it done. (She never says no, does she?) Then after he leaves, she finds her car’s stuck in the desert dirt. She wedges some scrap wood under her stuck tire and tries to shove the car out, and it rolls away from her, with her frantically running after it and hitting the brakes just in time. File that away under “foreshadowing” for the time being.

To cinch the Sandpiper deal, Jimmy returns to announcing bingo night at the old folks’ home. But he’s rigged a few of the bingo balls with magnetic primer so Irene will win — and when she does, her old friends refuse to applaud. Irene runs off in tears (poor Irene!), and Jimmy comforts her, suggesting that maybe her pals resent her for not settling the lawsuit. She asks him what she should do, and he advises her to “listen to your heart.” In other words: ka-ching!

Jimmy rushes back to the office with a bottle of tequila and good news: Irene agreed to settle! Happy days are here again! Except a frazzled Kim is too busy preparing documents for the Gatewood Oil case to celebrate with him. She rushes off with boxes in hand to meet a deadline, leaving Jimmy to do a tequila shot with Francesca. On the road, Kim fine-tunes her speech… but her eyes look a little heavy. Suddenly: boom! She wakes up, bloodied and bruised. She fell asleep at the wheel and crashed her car, with the carefully prepared Gatewood documents fluttering around in the wind. She’s been burning the candles at both ends — and she finally burned out. 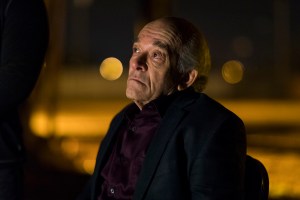 TAKE A CHILL PILL | Hector Salamanca is furious when Don Eladio’s henchman tells him he needs to keep working with Gus: “Everything moves through the Chilean.” Hector smashes his phone and spits at Gus: “F—k Eladio. F—k Bolsa. And f—k you.” He gets so agitated, he has to take a few of the pills Nacho doctored, but he seems fine afterwards. (Maybe they take a while to kick in and do damage?) Later, Nacho admits to his dad that “a bad man” will be taking over his business, and he needs to go along with it. He promises it’ll be over in a few weeks, and wants his dad to promise he won’t resist Hector, but his severely disappointed dad kicks Nacho out of the house. Hurry up and get to work, pills! 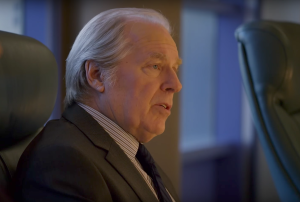 LAWYER-ON-LAWYER CRIME | Howard and Chuck meet with the malpractice insurance agents, who want to double HHM’s premiums because of Chuck’s condition. Howard tries to sweet-talk them, but Chuck bristles, threatening to sue the hell out of them. Then when Howard gently nudges Chuck towards retirement — “Maybe it’s time to hang up your spurs” — Chuck lashes out at him, bellowing that his condition isn’t a problem anymore. Later, he sends Howard a letter, informing him he’s suing HHM for breach of contract, looking to get paid out $8 million for his share of the firm — which HHM can’t possibly afford. Great, now Howard hates two McGill brothers!

* Mike sat down with Lydia at Madrigal’s posh offices, where Mike is officially being brought on as a “security consultant” to launder his $200 grand. Mike didn’t want his real name on the books, but Lydia assured him his money is merely “a rounding error” in the vast Madrigal machine. “I don’t know what you do,” Lydia told him, “but Mr. Fring must think you’re quite good at it.” (He is, Lydia.)

* There are few things in this world funnier than Mike Ehrmantraut sitting in stony silence when some millennial doofus whizzes by on a Segway.

* Add Irene Landry to the list of innocent bystanders who ended up casualties of Jimmy’s ruthless scheming. Poor thing. She just wanted to mall-walk and do chair yoga with her friends!

* The tequila Jimmy brought in to celebrate, Zafiro Añejo, should look familiar: It’s the same fictional brand he and Kim swigged while conning stockbroker Ken in the Season 2 premiere. It also popped up on Breaking Bad, as the tequila Gus poisoned to knock off Don Eladio and his flunkies.