This week on Better Call Saul, Jimmy slipped back into old habits… and Nacho tried to slide his way out of Hector Salamanca’s tight grip.

Jimmy’s free ad for the music store actually worked: The store is bustling with customers, and Jimmy shows up with his crew, ready to shoot more ads. But one of the owners called the TV station and figured out they can buy airtime directly for a lot cheaper. When Jimmy reminds them that doesn’t include production, they threaten to ditch him and shoot a new ad themselves. So Jimmy resorts to desperate measures: He kicks a drumstick on the floor and intentionally trips on it, falling to the ground and crying out in pain. Slippin’ Jimmy lives! He taunts the owners: “You guys have liability insurance, right?”

The scam lands Jimmy enough cash to pay Kim his half of the office expenses for the next six weeks. (And a sweet electric guitar, to boot.) But Kim doesn’t want to see him hurting himself, and encourages him to rest up and finish his community service while she handles the finances. So Jimmy returns to picking up highway trash — but he can never give up scheming. When a drug dealer tries to ditch work early and the supervisor won’t let him, Jimmy tells the dealer he can get him out… for a $700 fee. Then he threatens to sue the supervisor, throwing a bunch of scary legal terms at him until he relents and lets the dealer go. Jimmy’s really learning that crime does pay, isn’t he? 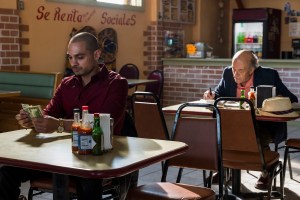 Meanwhile, Nacho’s following through on his plan to sabotage Don Hector’s heart medication: He crushes up ibuprofen and carefully scoops the powder into pill capsules that match Hector’s, then practices hiding the pills in his palm and dropping them into a jacket pocket just like Hector’s until he gets it right. He’s really thought this out: He even sneaks onto the roof of Hector’s Mexican restaurant at night and breaks the air conditioner, so the next day, it’ll be so hot in there that Hector has to remove his jacket. (Check out the big brain on Nacho!)

That leads to a fantastically tense sequence in the restaurant, with Nacho counting his underlings’ money and waiting for the perfect time to pull off his plan. Once Hector’s jacket is off, Nacho brings him a counterfeit bill to examine, distracting him enough to check his jacket pocket. He retrieves Hector’s pill bottle and sneaks it over to his seat, where he swaps out Hector’s pills for the ones he doctored. His hands are shaking like crazy, but he gets it done, and on his walk back, he tosses the pill bottle… and it lands in Hector’s pocket perfectly! Mission accomplished. Nacho’s hands are still shaking, though. Maybe he’s not cut out for this line of work? 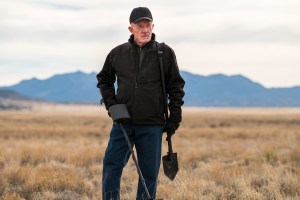 GOLD DIGGER | Mike’s got a metal detector, which seems like a nice hobby for a man his age. But really, he’s not looking for pennies: He scans a barren stretch of desert until he finds a dead body with a ring on its hand. (Whose body, though?) He calls the police anonymously from a pay phone to notify them. Then he retrieves more stacks of cash from the secret compartment in his closet… but he needs help. So he goes to Gus, telling him he has 200 grand in cash he can’t spend, and wants to launder it so his family can use it. Gus warns him “it would be unwise for us to be publicly associated” because of the Salamancas, but he agrees to help — and he doesn’t even want a cut of the money. They shake hands, cementing a partnership that we know doesn’t turn out all that well for either of them.

FREEZER BURN | Chuck’s feeling much better, telling his doctor his pain is more manageable now and dreaming of going back to work fulltime. He tests himself by forcing himself to go to the grocery store by himself, wincing underneath the harsh fluorescent lights. He struggles walking through the freezer aisle, with its loud electronic buzz, but he makes it out, soy milk in hand. Howard’s waiting for him at home, though, and he wants to talk about Chuck’s malpractice insurance. Remember when Jimmy blabbed to the insurance agent about Chuck’s condition? Uh-oh.

CHECK YO SELF | Kim has lunch with her Mesa Verde clients, only to be interrupted by Howard, who horns his way in to say hi and condescendingly refer to Kim as a “protégé.” Kim responds by writing him a check to cover the law-school loans Howard paid for while she was at HHM. But Howard tears up the check — real mature! — accusing Kim of stabbing him in the back for representing Jimmy at the disbarment hearing. Plus, the Mesa Verde boss wants to refer Kim to a friend of his who needs legal help, even though she’s clearly overworked. She says she’ll refer the friend to a trusted associate… but later, when Kim sees how much Jimmy’s struggling, she calls the friend and agrees to represent him. Guess there are a few more five-minute car naps in her future.

* If all that weren’t enough — a lot going on this week! — the episode opened with a flashback to Jimmy and his old con-artist pal Marco (Mel Rodriguez), who broke into the abandoned store Jimmy’s family used to own so they could retrieve some coins for a scam. The scene basically served to underline Jimmy’s disdain for the straight life, saying of his parents: “They worked a lot of hours for a lot of years, for nothing.” His dad was done in by his soft heart, he remembered: “He was never gonna do what he had to do.”

* Are we supposed to know whose body Mike found in the desert? Or is this connected to the mysterious favor Mike asked Nacho for last episode?

* Wouldn’t the $14k on the check Howard tore up go a long way towards paying Jimmy’s half of the expenses, so Kim wouldn’t be forced to take the extra work?

* Returning this week as Chuck’s doctor: It’s Clea DuVall! Guess Marjorie had some time off from protecting Selina Meyer on Veep. (She’s not President anymore, anyway.)

* The check Kim wrote to Chuck clued us in on the current timeline. The date she wrote in: March 4, 2003. Man, that’s so long ago, the world had only seen one Fast and the Furious movie!