Jimmy came dangerously close to hitting rock bottom this week on Better Call Saul… and he’s not the only one. 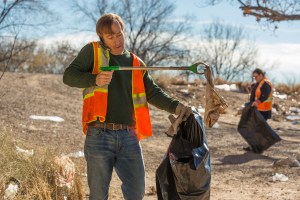 Yes, Monday’s episode saw Jimmy lower than we’ve ever seen him, picking up highway trash for his community service and hustling to shoot local ads to sell off his pre-bought airtime. But his partner Kim Wexler is in a bad way, too, reduced to taking five-minute naps in her car and snapping at her Mesa Verde clients due to a mix of nagging guilt and sheer exhaustion. They tried to blow off some steam together by pulling off another Viktor/Giselle con job at a hotel bar… but Kim pulled back when she saw Jimmy going to a very dark place.

To understand what Kim’s going through, TVLine reached out to Rhea Seehorn, who calls Kim “one of my all-time favorite characters I’ve ever done.” Read on for Seehorn’s take on Kim’s guilty conscience (“I think it’s taking a toll on her”), that “terribly tragic scene” at the hotel bar, Kim’s reaction to the debut of Saul Goodman, the “intense drama” still to come this season… and the chances we’ll ever see Kim share a scene with Mike Ehrmantraut. (Preferably over a bottle of really old Scotch.)

TVLINE | Kim scored a big win at Jimmy’s disbarment hearing, but it looks like she’s still wracked with guilt about what that did to Chuck.
I think it’s taking a toll on her. It’s a very large brick in a wall that was already being built. Because the Mesa Verde guilt is still weighing on her… the ill-gotten gains. One of the biggest things that shapes Kim this season is being forced to let go of living in black and white, and “good and bad” not being the same as “legal and illegal.” [Chuck’s] whole unraveling on the stand had so many implications. It’s a further trampling of any ideals Kim might have had, as someone who’s trying to operate on the right side of the law. To ruin someone like that… his career must be deeply damaged, if not over at that point. And that weighs on her. 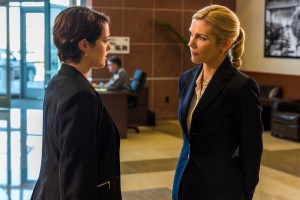 And the alterations in Jimmy’s conscience, I think, Kim is observing as well. That causes a distance, for many reasons. He is her only confidant, and when you see Kim start to unravel, especially this scene at Mesa Verde… she’s not sleeping, she’s not even going home to shower. Control has been the way she’s gotten herself out of everything, up until now. And it’s beginning to be her Kryptonite. [At the hotel bar], she makes this attempt to tell Jimmy: “I’m starting to unravel,” just for a second to be that vulnerable. And unfortunately, in that moment, he goes further away. It’s sort of a lost opportunity, which makes that scene so terribly sad — not just us watching Jimmy start to lose his conscience, but Kim start to lose, really, her only anchor. It’s a terribly tragic scene. They’re not able to meet each other where they’re at. They’re both somewhere else.

TVLINE | Speaking of that scene: Do you see any resemblance between Bob Odenkirk and Kevin Costner?
[Laughs] No, I don’t! I don’t know who said what celebrity name they were going to use. Structurally, if you were to make a clay model of their faces, it would be close enough that it makes it funnier. It’s not like they said someone that isn’t even in the ballpark. That’s not to say Bob isn’t handsome! He’s a very handsome man! 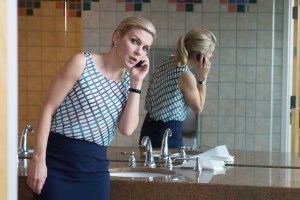 TVLINE | There’s a rebellious side to Kim, isn’t there? We’ve seen it with the cigarettes, and the Giselle alter ego…
There’s certainly more to Kim than what she presents to people. You’ve seen her be a chameleon in a lot of ways. I think she’s much more relaxed and funnier and more wry when she’s with Jimmy. There seems to be some darker part of her. There’s also more tragedy in her than I think I, at first, understood. She’s truly a loner, except for Jimmy, and does not let many people in. Anyone that holds their cards that close to their chest, I’ve always thought there’s a dangerous side to that person. A tragic side. And they just keep giving these little fissure cracks where you see it.

TVLINE | Yeah, we don’t really know very much about Kim’s past. Do you have your own backstory for Kim, as an actor, even if we don’t see it?
I do. And I make sure that I add a jigsaw piece to my puzzle whenever they come up. Stuff like the job interview [in Season 2’s “Inflatable”], where they asked her where she was from, and she wouldn’t answer. It was very interesting to me that she said “the Kansas/Nebraska border,” and it was a small town… what was it that she had to get away from, or wanted to get away from? And that she just wouldn’t answer… in the middle of a job interview! It would almost be better to just lie and say a city. I talked about it with the writers for quite some time. She’s not acting particularly dodgy, but she just will not say. I take these pieces and factor them in, and then it’s just reverse engineering. What would make somebody that way? How do we get from there to here?

I think you’ll see more of who she is now, and that’ll raise more questions about what makes her tick. And this season does not let up until the last second. [Laughs] There’s more high comedy, there’s tragedy, there’s intense drama… it just keeps ratcheting up. 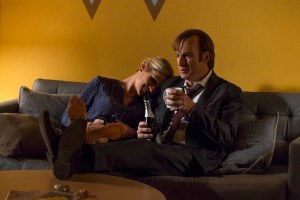 TVLINE | Kim heard the name “Saul Goodman” for the first time last week. Her reaction was hard to read: befuddled, but also sort of impressed at the same time.
[Laughs] That was a fun scene to play, because there’s so much mixed up in it. There’s the sadness of the other stuff, and her needing a release. I think they desperately want to connect with each other again. Both of them have been floating out to sea quite a bit, and it’s kind of like you finally get the chance to pull the rafts closer for a minute. When Jimmy’s not doing something that has ill consequences, Kim sort of loves, as much as our viewers do, when he colors out of the lines with such incredible flourish. I think Kim loves that. It’s sort of ingenious. It takes her a minute. You see her doing the math on, “Wait, is this legal? Can you actually do this?” And once the answer comes up, “I think so”… she loves it. But it’s extremely odd. Someone you’ve known for eleven years just made up a name and an entire character, and is now doing insane commercials on TV. It amuses her, it disturbs her, it confuses her… it’s a strange moment. I don’t think she knows what to make of it.

TVLINE | So far, Kim has steered clear of the Mike Ehrmantraut/crime side of things. Will we ever see you and Jonathan Banks share a scene together?
I wouldn’t be able to tell you if I did or I didn’t. I can tell you that Jonathan and I have been discussing that at length for quite some time. [Laughs] We adore each other, and would love to be in a scene together. I always laugh, because they have some weird similarities. They would have a really great staring contest, for one. I think they would probably appreciate quite a bit of each other’s work ethics. Very no-nonsense, and they do not suffer fools. The only difference being, there’s one particular person who he thinks is a fool that Kim adores, which is Jimmy. So they’d have to meet in the middle somewhere on that one. [Laughs] I have a feeling they would both just drink some really old Scotch.