Jimmy was forced to scramble after a big win this week on Better Call Saul… and a new alter ego was born.

Thanks to Kim’s heartfelt closing statement on his behalf (and Chuck’s meltdown last week), Jimmy emerges from his disbarment hearing with his law license intact, and he and Kim celebrate by sharing a bottle of Champagne poured into coffee mugs. He did get his law license suspended for a full year, though, forcing Jimmy to call all of his elderly clients and inform them that he’s taking a “brief sabbatical from the law.” In the process, he realizes his “Gimme Jimmy” ad is still running on daytime TV, and he’s stuck paying for nine more ad buys he can no longer use. He’s not even allowed to resell it. Unless… 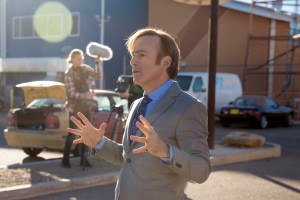 Jimmy reassembles the film-school misfit crew who shot his ad and hustles around town to local businesses, offering to shoot an ad for them and giving them his airtime for free — only charging them for producing the ad. It’s a nifty loophole he’s found, but the clock is ticking; when the owners of a discount carpet warehouse ask for time to think about it, Jimmy tells them, “We would need to be shooting in the next 15 minutes.” He returns to his film crew dejected, without a sale, but an offhand comment from one of them (“Maybe you could make a commercial?”) flicks on a light bulb above Jimmy’s head.

He heads to the offices of TV station KWBV, where he’s bought the ad space, and sets up a shoot in their parking lot: He’ll make an ad for his ad space, telling local businesses he’ll produce their ad for them. He realizes he can’t really show his face in the ad, though, because it’ll hurt his reputation as a lawyer. And his crew is hopeless at reading ad copy in front of a camera. So Jimmy decides, “We’ll have to Karloff this thing.”

When Jimmy’s phone starts ringing off the hook with businesses offering to buy his ad time, Kim asks to see the commercial he ran. After some hesitation, Jimmy pops the tape in, and we see him hawking the ad time in disguise — wearing a baseball cap, a fake goatee and a many-pocketed vest, like a cut-rate Spielberg. The name he gives at the end? Saul Goodman Productions. Jimmy explains to a bewildered Kim: “It’s like, ‘S’all good, man’… it’s just a name.” Yeah, we’ll probably never hear that pseudonym again, will we?

Elsewhere in “Off Brand”: 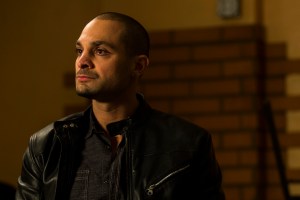 NACHO BUSINESS | Nacho is really setting himself as the conflicted villain of Better Call Saul, isn’t he? When Krazy-8 (hi, Krazy-8!) brings him a short stack of cash, Nacho almost lets him go with a warning… until Hector taunts him, “Who works for who, huh?” (Nacho responds by yanking Krazy-8 around by his hair and administering a savage beating.) Then when Nacho picks up a drug shipment from Gus’ Los Pollos Hermanos crew, he’s supposed to take five drug bundles, but he insists: “Don Hector gets six.” Victor sticks a gun in Nacho’s face, but Gus tells his guys to let him have it, and Nacho calmly walks out with the six bundles.

His time under Don Hector’s thumb might be coming to a close, though. Hector’s envious of Gus’ innocent chicken-shop front, and wants one for himself… so he asks Nacho about his dad’s car upholstery business. Nacho pleads that his dad doesn’t know anything about the drug game, but Hector doesn’t budge: “You will teach him.” Hector flies into a rage, though, when he hears bad news about Tuco — he broke a guard’s jaw in prison and is stuck in solitary — and has to take pills to calm down. One of the pills falls to the ground… and Nacho keeps an eye on it, placing his shoe over it when Hector’s not looking. Is a coup brewing?

* Chuck was still devastated after last week’s courtroom turmoil, but Howard assured him the bar’s decision on Jimmy was good news: He’ll surely screw up again during his suspension, and then he’ll get his license revoked for good. So they toasted “to new beginnings” with a very old bottle of Scotch, and that inspired Chuck to face his affliction head-on, first gripping a battery in his bare hand and then walking the neon-lined streets of downtown… albeit with a Mylar hoodie on. Is he trying to get better in hopes of exacting vengeance on his brother?

* Mike only popped up in one brief scene, accompanying his late son’s widow Stacey to her church support group. He also got roped into helping fix up the church’s playground — the old softie.

* This episode was a real stroll down Breaking Bad memory lane, wasn’t it? Along with Krazy-8’s cameo, Tyrus (Gus’ henchman who stepped up after the Chicken Man slaughtered Victor) handled the drug exchange with Nacho. Plus, Gus went to scope out the industrial laundry that we know later becomes the front for his meth superlab, and he reported his approval of the place to… Lydia! Yes, the Stevia-loving corporate exec who attempted to kill Mike and Walter White — and got a dose of ricin in response.

* Is Nacho’s plan for Hector’s pills what leads to the stroke that we know the drug lord suffers? He might just be investing in a shiny new bell by season’s end.

* Quote of the week came when Jimmy admired the stellar production of his Saul Goodman ad: “Guy at the station says he’s never seen so many star wipes in a row. It’s never been done.”