Better Call Saul shelved all the drug-trade stuff this week and went full-on courtroom drama, building to a climactic brother-vs.-brother showdown between Jimmy and Chuck.

We start off with a scene-setting flashback: Chuck prepares an elaborate gourmet dinner by lantern light after Jimmy ominously warns him, “The bigger the lie, the harder it is to crawl out.” (And he should know.) The big lie here is Chuck’s condition: He’s invited over his ex-wife Rebecca for dinner, but makes up a story about his electricity getting accidentally shut off to explain all the candles. Things go OK… until Rebecca answers her cell phone. When she walks close to Chuck while talking, he grimaces and gasps for air. Finally, he grabs her phone and throws it across the room. He blames it on her “bad manners,” but she quickly says good night and flees. And he still never told her the truth. 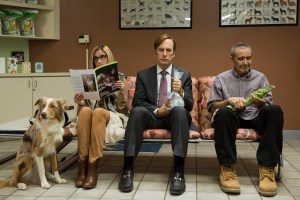 Back in Saul‘s current time frame, Chuck prepares to testify against Jimmy at his disbarment hearing. The hearing room has been prepped for his arrival, with all the lights turned off — except those pesky exit signs. Howard asks him if he’s sure he wants to testify, but Chuck insists he has to: “He deserves disbarment. Not some slap on the wrist.” Meanwhile, Jimmy and Kim prepare in their own way: Kim diligently double-checks all her documents, while Jimmy heads to a shady veterinarian to recruit “a real pro” for a job that needs doing. “Does he need to fit into a tight space?” the vet asks. (Ah… we know who that means, don’t we, Breaking Bad fans?)

At the hearing, Kim tells the bar review committee this case isn’t about Jimmy lying, but about “two brothers whose relationship, after years of strain, finally broke.” And she’s sharp as a tack while cross-examining Howard; when he says hiring Jimmy at his firm would’ve constituted nepotism, she asks who the other “Hamlin” in Hamlin, Hamlin & McGill is. “My father,” he’s forced to admit. Meanwhile, Jimmy’s nervously glancing back at Francesca in the gallery, who tells him, “Flight’s delayed.” Oooh! Who’s flying in? A surprise witness?

Chuck arrives to take his seat on the witness stand, and the committee accommodates his illness, with everyone agreeing to surrender their cell phones. (They even take the clocks off the walls!) Jimmy claims he left his phone in his car, though. And on his way into the hearing, Chuck innocently bumps into a guy on the stairs — and it’s Huell! He later becomes Saul’s fast-fingered bodyguard on Breaking Bad, so we know that wasn’t just an innocent bump. 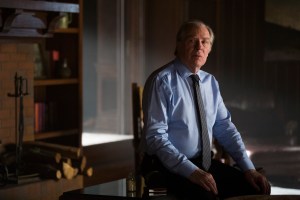 On the stand, Chuck explains his strange affliction — electromagnetic hypersensitivity, or EMHS — and admits he played it up to lure Jimmy into confessing: “What you heard was theater.” He also pompously states that while he doesn’t hate his brother, he does want him to lose his law license because “the rule of law is too important to toy with.” His face falls, though, when Jimmy’s secret weapon walks in: It’s Chuck’s ex-wife Rebecca. She assures him she’s just here to help, but Chuck scoffs at that: “You’ve been sold a bill of goods.” She notices he’s not exactly happy to see her.

Now Jimmy steps in to cross-examine his brother, saying the tape recording is evidence that “my brother hates me.” He needles Chuck about his affliction, and wonders why he never shared it with Rebecca. Chuck laughs this off an attempt to rattle him, to “split me apart at the seams, like a murderer confessing on an episode of Perry Mason.” But Jimmy persists, nodding to Francesca while quizzing Chuck about the symptoms of his disease. Chuck describes a burning pain whenever he’s around electricity just as Francesca brings Huell in to watch. Jimmy’s trap is set.

He asks Chuck to identify where the closest source of electricity is… and then reveals he still has his cell phone while standing next to him, tossing it to Chuck. It’s supposed to be a “gotcha” moment, but Chuck opens the phone and finds no battery inside, exposing Jimmy’s ploy as a “sorry little trick.” Jimmy’s not done, though: He asks Chuck to look inside his jacket pocket. In there, he finds… the phone battery! Jimmy triumphantly shouts that Huell can testify he planted the battery on Chuck an hour and 43 minutes ago, “and you felt nothing!”

This sends Chuck into full meltdown mode, with him literally screaming, “I am not crazy!” He rants about his brother’s past misdeeds, practically spitting out his contempt: “He’ll never change!… And he gets to be a lawyer? What a sick joke. I should’ve stopped him when I had the chance.” When he’s done, the bar committee (and the whole room) are left in stunned, embarrassed silence. Chuck stammers out an apology, Jimmy says he has nothing further… and all we can hear is the persistent buzz of those exit signs.

* No Mike this week — or Gus Fring, for that matter. But the McGill-vs.-McGill fireworks were so good, I didn’t even miss them.

* Huell, of course, would pull off another sleight-of-hand trick years later on Breaking Bad, infamously snatching the ricin-stuffed cigarette out of Jesse Pinkman’s pocket while patting him down in Season 4.

* Those shots of Jimmy and Kim waking up together, brushing their teeth and going over their case were very cute. Makes it all the rougher to contemplate what horrible thing must be about to happen to split them up for good.

* Ann Cusack — yes, John and Joan’s sister — returned to play Chuck’s ex-wife Rebecca; she debuted in Season 2’s “Rebecca.” You might recognize her from Private Practice, The Unit, Castle, Hart of Dixie… and as left fielder Shirley Baker from 1992’s A League of Their Own.

* Kim also met with the folks at Mesa Verde, who congratulated her on doing such a great job — and they didn’t even blink when Kim told them everything about Jimmy doctoring the documents, “in the spirit of full disclosure.” Anyone else still have a sinking feeling, though, that this is all going to blow up in poor Kim’s face?

* Huell looked a lot lighter, didn’t he? Turns out actor Lavell Crawford has lost 120 pounds since his time on Breaking Bad. He could actually fit into a reasonably tight space!