The Paddy’s Pub gang is officially all here: The stars of It’s Always Sunny in Philadelphia confirmed that co-star Glenn Howerton (Dennis) will be back as a full-fledged cast member for the upcoming Season 13.

“He’s in pretty much every episode,” star/creator Rob McElhenney told reporters at the Television Critics Association summer press tour on Friday. (In fact, Howerton appears in both episodes screened in advance for critics.) The writers “talked about all sorts of different ideas” about how to address Dennis’ possible absence, he admits, “before we knew that Glenn was actually coming back.”

But Sunny also takes the opportunity to explore other cast members next season: One Season 13 episode, star Charlie Day teases, is “an all-female reboot” of Season 10’s “The Gang Beats Boggs,” with Dee, The Waitress, Artemis, Mac’s mom and Charlie’s mom taking a flight to Los Angeles for a women’s march and trying to beat Wade Boggs’ legendary drinking record. “It was really fun to focus on some of the other characters,” Day adds. 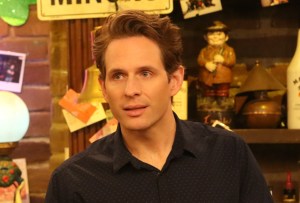 In last season’s finale, Dennis ditched his pals to accept some grown-up responsibilities for once, announcing that he’d be moving to North Dakota to help raise a baby he didn’t know he had fathered. And while the official Season 13 description details various zany schemes for Mac, Charlie, Dee and Frank — one episode sees Mac struggle to come out as gay to his convict father — it merely says that Dennis “takes on the new role of father in North Dakota.”

Sunny wastes no time in addressing Dennis’ big decision: The Season 13 premiere introduces “Cindy, the new, ethnically diverse female member of the gang who can successfully pull off scams,” while Mac deals with Dennis’ absence by bringing in… a life-size sex doll that looks just like his missing pal. The long-running FXX comedy returns on Wednesday, Sept. 5 at 10/9c.

Howerton does have a full plate at the moment: He also stars in the NBC comedy A.P. Bio, which scored a surprise Season 2 renewal in May.