The following article contains major spoilers from the series finale of The Originals. Proceed at your own risk.

After 92 episodes — plus a few dozen more if you factor in their time on The Vampire Diaries — Klaus and Elijah Mikaelson’s thousand-year story came to an end on Wednesday’s series finale of The Originals. The episode’s closing scene found the brothers taking their own lives after absorbing the darkness that was in Hope, ensuring that their family line can continue… albeit without them.

TVLine spoke with series creator Julie Plec about her decision to off the brothers, as well as what the future could hold (spiritually speaking) for Klaus and Elijah:

TVLINE | Did you always know the show would end with the brothers’ deaths, or was that an idea that presented itself along the way?
I figured one of them would go, for sure, when we started this show. My feeling was that it probably would have been Klaus, and we’d let Elijah live a life unencumbered without his brother. But then we got to tell that story for Elijah in the final season. We let him live that unencumbered life, and he found his way back to his brother because, ultimately, for better or for worse, in all its co-dependent glory, that is the legacy of Klaus and Elijah. Much like The Notebook, I feel like it was only right that they should go together.

TVLINE | Because Elijah spent so much time trying to escape Klaus’ emotional pull, I have to imagine that some fans will see Elijah’s death as him giving up, or giving in. What do you say to that?
For me, it’s two-fold. One: Elijah has been driven by survivor’s guilt his entire life. He was witness and party to his brother’s abuse at the hand of their father, and he always felt responsible for that. Over a thousand years, it became a pathological co-dependency. His entire dream in life was to help his brother find redemption by way of understanding unconditional love. In the final moments, as Klaus is ready to sacrifice himself for his daughter and his family, Elijah can recognize that his brother has reached the completion of that journey, which means Elijah has completed the journey as well. 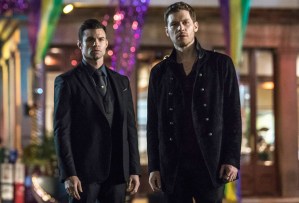 To those who ask, “Why doesn’t Elijah get to live his own life now?” I would look at what happened this season. He did get to live his own life, one free of his family. He got to fall in love and have that whole experience, but he came out of it to find that one of the consequences was his hand in the death of Hayley. Elijah can’t live on happily and freely and find new love and new life with that hanging over his head. This is his way of making spiritual amends for his part in her death. Being by his brother’s side as the two of them escape their immortality, which was a curse that was put upon them, felt right. It felt beautiful, and it felt like those two were meant to be together. They’re the [non-romantic] end game of this series.

TVLINE | Is it safe to say that Hayley and Elijah will get that dance in the afterlife?
That’s the beauty of it. In death is an opportunity for Elijah’s spiritual redemption. We’ve established that peace exists, that Hayley is there, and that she’s happy and has forgiven him. We’ve asked if that’s where they’re going, and I’d like to hope that it’s where they’ll ultimately find themselves.

TVLINE | We talked a lot about “peace” when The Vampire Diaries ended. Do you know what Klaus and Elijah’s peace looks like?
Much like the idea of heaven in our world, it still exists in the way you want it to exist in your own mind. Is it an actual place, like The Good Place? Those are the kinds of questions for people to think about and interpret on their own. It’s not like the Other Side where there’s a spell that captured them and is keeping them over there. It’s still an idea, an emotion that you can have.

TVLINE | A lot of our readers have said “I don’t care how it ends as long as Klaus doesn’t die.” Do you foresee them being upset about this?
Yes and no. I can’t see it having ended any other way. Therefore, it’s the ending. Joseph Morgan felt exactly the same way. We’re telling a story about two immortal beings — what do you think the ending is? The ending is freedom from immortality. Looking at it subjectively, that’s the inevitability of this kind of show. I love that fans love this character so much. They’ve had more than seven seasons of television to be in love with these characters. It’s been a beautiful relationship between the fans and Klaus, specifically. And I just really like closure.

TVLINE | Not to mention, Legacies will now begin with an orphaned girl in Mystic Falls, which brings this whole franchise even more full circle.
When we meet Hope in two years, she’s going to have an entirely different perspective on life. She’s going to have bruises and damage that she didn’t have prior to the end of this. She’s going to be a young woman with a lot of emotional scars, and I think that’ll make for a more dynamic heroine.

Your thoughts on Klaus and Elijah’s deaths in The Originals series finale? Grade the episode in our poll, then drop ’em in a comment below.