While the quote used in this recap headline is true for the Mikaelson family as a unit, it doesn’t necessarily apply to all of its members.

Picking up immediately where last week’s episode left off, Wednesday’s series finale of The Originals found Klaus ready to plunge the White Oak Stake into his heart, eliminating the darkness he siphoned from Hope once and for all. But Hope wasn’t about to let her father sacrifice himself to save her, so she knocked him unconscious with a flick of her wrist (damn, girl!) and took him back to New Orleans with Elijah.

Unfortunately, the prognosis was even worse than Hope feared. “There isn’t enough magic in the world to slow this down,” Freya told her, not that her aunt didn’t furiously raid Vincent’s library of spells in the hopes of finding a solution that would keep Klaus alive.

Speaking of the hybrid with a death wish, Klaus’ condition began to progress rapidly, resulting in him hallucinating a vision of his father (wearing black!), who was hellbent on tricking him into murdering Hope. Fortunately, Klaus also hallucinated a vision of the unflappable Cami O’Connell (wearing white!), who served as the angel on his shoulder until he was subdued by Hope and Elijah.

Then came the world’s saddest goodbye tour, which Klaus began with an afternoon in his favorite city with his favorite lady friend. After Caroline played Klaus the infamous voicemail he left her in The Originals’ backdoor pilot on The Vampire Diaries, she took him up on his offer for a tour of New Orleans, all the while trying to convince him to say goodbye to his family. When Klaus eventually admitted that he didn’t know how to say goodbye, she gave him a demonstration for the ages, kissing him and walking away without looking back, no matter how much she admitted that her heart was aching. (For the record, he didn’t follow her instructions exactly, or else this show would have ended with some truly unfortunate lip locks.)

But when the time came for Klaus to pass into the Great Beyond — or “peace” as it’s known in the TVD-verse — he didn’t do it alone. Unbeknownst to him, Elijah siphoned a little bit of the dark magic from Klaus earlier in the episode, ensuring him the same fate as his brother. This led to a big dramatic speech about how his true mission in life had been to help Klaus achieve redemption, and with that mission accomplished at last, he was ready to die by his side. Which is exactly what they did. 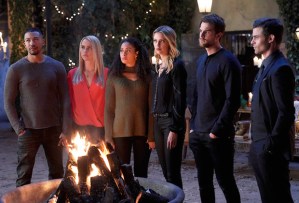 As for the rest of the Mikaelsons…

* After telling Rebekah that he never should have stood in the way of her happiness, Klaus informed her that there’s a cure in Mystic Falls with her name on it. The prospect of actually leading the human life she’s always wanted inspired her to go directly to Marcel and finally accept his proposal, correcting the mistake she made in the season finale.

* Freya approached Vincent about helping her start a family with Keelin, but in the second major rejection of the season (remember when Elijah said he wouldn’t walk her down the aisle?!), Freya was shot down. Not wanting to open himself up to the potential of love and loss, Vincent explained that he simply couldn’t imagine fathering a child. But after bearing witness to the Mikaelsons at their most emotionally vulnerable, he changed his tune, agreeing to provide the necessary materials to make the ladies’ dream come true.

* And Kol… I mean, he finally got an “I love you” from Klaus, which was nice. But he’s still kind of the same Kol — and I wouldn’t want him any other way.

Your thoughts on The Originals finale? Grade it below, then drop a comment with your full review.