The following contains spoilers from the fourth and final season of Hulu’s Casual, including the series finale. Still binge-watching? Bookmark and return later.

Before there was The Handmaid’s Tale, there was Casual, Hulu’s first critically acclaimed series which never quite got the attention it deserved. The half-hour dramedy concluded with a fourth and final season on Tuesday which showed that, despite all we’ve come to know about these characters, each and every one of them is capable of change.

Picking up several years in the future, the eight-episode farewell found Alex and Rae raising a child together, but not together; Val ditching her practice to open a wine shop; Laura trying (and failing) to close herself off to love; and Leia and Leon realizing that they have different expectations for their family. In the end, everyone gets their happy ending, though not necessarily in the traditional sense.

Here, creator Zander Lehmann reveals why Alex and Rae didn’t wind up together, why Valerie didn’t end the series in a committed relationship, and the importance of having the finale come full circle.

TVLINE | How much did the vision for Season 4 change once you knew this was indeed the final season, and only had eight episodes (versus the usual 13)?
It changed a fair amount. We had always at least considered the idea of jumping head in time, before we knew this was the final season. Then once we heard [it was], we thought this would be a really good way to go out, a way to show our characters’ growth and evolution in a way that we probably couldn’t have done had we just picked up directly after [the events of] Season 3. For all these characters, there was a question of how much they should evolve and grow, and how much room there was for them to change. At the beginning of the series, we had long discussions about whether these were characters who would change, or whether they’re even capable. 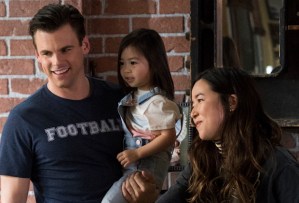 TVLINE | How much did that question play into Alex’s journey this season, and the decision to have him relocate to Austin to be closer to Carrie and Rae?
Alex is the character who from the beginning… had been on this journey of trying to find love and acceptance and something that he feels like he never got from his parents. It always felt like this idea of his work — the idea of trying to build this algorithm to try and find the perfect person for him — was a response to feeling like he was unlovable or unloved. He comes to realize [by the end of Season 4] that it may not necessarily be a romantic partner that he needs. He has this… unconditional love for Rae and his child, and he’s willing to give up the life that he built to go try something new and be with them.

TVLINE | Why was it important for Alex to reexamine his relationship with dead dad Charles during Episode 4’s hallucination sequence?
I think he never put it together that he was about to have his own complicated relationship with his daughter, where he’ll have this untraditional family model. I think he needed to see his father to understand that his internal struggle was about his role as a parent, and sort of getting over his own unrest with his father.

TVLINE | Alex and Rae get a happy ending, albeit an unconventional one. Their family is staying together, but she’s committed to Jeff. Did you ever consider going the more traditional route and letting Alex and Rae be a couple?
Yeah, we talked about it a lot. Maya Erskine, who plays Rae, is such a good actress, and when she and [Tommy Dewey, who plays Alex] share scenes, you root for them to be together. So believe me, the inclination [was there]. I know fans of the show will be like, “Oh f—k, I wish they ended up together” in that sort of conventional, romantic way, but I don’t think that was ever really our show. Do they eventually end up together in 10 years? I don’t know. Does Alex find some other person who’s better suited for him? That’s possible, too. I think the idea is that he’s learned that it’s not all or nothing. There’s not just this one person he needs to complete him. They’re unconventional, and he’s cool with that.

TVLINE | We leave Val not in a committed relationship, but surrounded by friends and loved ones following Alex’s departure. Why is that?
What we get to — and I really like this for her — is the understanding that it’s not just about being with another person. There’s more to it than that. You don’t have to be with one person to be happy, or to find a version of community. I think for women in their 40s and 50s, there’s this weird feeling like you can’t be alone, or you’re a failure if you’re alone and don’t end up with someone. For her, I thought it was affirming that she got to live life on her own terms. I mean, she has a one-night stand with this guy [following the double date], then she gets to hang out with her family and friends, and she has the career that she wants. To me, that felt like the happiest version of a happy ending that wasn’t just her finding a nice guy and riding off into the sunset… It’s more interesting for her to realize, “I’m happy with who I am, and if I happen to find some guy to be with, great. And if not, that’s fine, too.”

TVLINE | Laura really comes into her own this season and learns to let someone in whom she really cares about. Who would have thought she’d be the one in the family to wind up in a healthy relationship!
Val and Alex were always looking for that person to complete them. I like that Laura, of all of the characters, is the one to wind up in sort of a stable, long-term relationship. In the first three seasons, she’s 16- and 17-years-old and obviously making a ton of mistakes, and I think part of the function of the time jump was to allow her to evolve and realize, “I am not poisonous. I am not someone who just drives people away.” A lot of it has just been her unwilling to do the work for so long and now she’s got Tathiana, who she cares about and is willing to do the work with. To me that feels like real growth and such a satisfying place to leave her character. 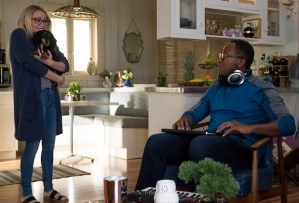 TVLINE | After nearly getting divorced midway through the season, Leia and Leon work things out, and while they don’t have a baby, they do have an adorable puppy named Alex. Was it important for you to have that one truly conventional happy ending?
Yes. They were the ones we always knew would end up staying together. As problematic as our main characters’ love lives are, Leia and Leon to me have always represented some version of idealized love, and the fact that you can find the person that means more to you than yourself. And obviously we throw them a lot of obstacles this season, but we always knew they would come back and sort of figure it out, because that’s who they are. They’re the characters who make it work and we aspire towards.

TVLINE | The finale is in many ways is similar to the pilot, from the funeral to Alex and Val’s secret double date. Was it always the plan to have the first and last episodes mirror each other?
[The idea] came about in the early stages of breaking this season. The first and the last episodes feel like they’re of a piece, and I like that. I really wanted to tell a version of the [double date] story [again]. You know, the double date this time ends so positively. They get caught, but they still have fun together. This is the version that could have been in the pilot, but it would have been a totally different series… These characters are in such different places that hopefully these stories resonate in different ways, and the callbacks are fun.

What did you think of Casual’s final episode? And Season 4 overall? Grade ’em in the following polls, then weigh in below. And for more of our chat with Lehmann about the politics and technology of Season 4, click here.