Does Casual‘s final season take place in a world where Donald Trump is no longer president? While the Hulu dramedy doesn’t come right out and say it, it certainly seems to be the case.

“I think probably [Trump is no longer president in our show],” creator Zander Lehmann tells TVLine. The series’ swan song, which was released on Tuesday, takes place nearly half a decade after the events of Season 3, placing it somewhere between 2021 and 2022. As for why the show doesn’t come right out and say that there’s a new POTUS? “We never specifically said it because it opens up a can of worms that overwhelms the narrative of the show.”

Be that as it may, Lehmann and his writing staff found plenty of ways to address present-day politics and how they manage to affect the series’ near-future. In one episode, Alex attempts to learn more about Rae’s new boyfriend Jeff by pulling up his social media accounts with the help of virtual assistant Ova. His search is ultimately cut short, which is a direct result of net neutrality’s demise. “We can’t believe that this is happening, that it’s going away and nothing’s stopping it, but it is,” Lehmann says, so the writers decided to “poke fun at it and show the world as it’s going to be — one where Twitter is not included in your Internet package.” 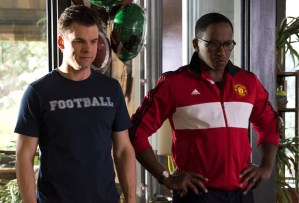 Far less likely is the extinction of the NFL, though that didn’t stop the Casual writers from imagining a world where everyone gathers at Alex’s house for a viewing of the last Super Bowl ever. Lehmann admits that the idea is “probably more wish fulfillment on our side. I don’t think football is going away, or the NFL is significantly changing in the next five years” despite current controversies surrounding kneeling during the national anthem and players suffering from CTE, “but I think we all have a pretty complicated relationship with the gladiatorial sport, so it felt like a nice way to comment on a thing that a lot of people are thinking about, but don’t have answers for.”

Trump himself isn’t called out until the series’ penultimate episode, when Alex makes a snide remark about the millions of people who voted for the former Apprentice star. The darkest reference to 45’s administration comes much earlier, though. In the season premiere, Val’s ex-husband Drew is scrolling through his phone at a dinner party when all of a sudden he perks his head up to share late breaking news.

“Oh wow, they found Scott Pruitt in Ukraine. You remember him? Shot 14 times in the street,” he says. “No way!” Alex exclaims. “Hmm, you ever been to Ukraine?” he asks, to which his ex-brother-in-law quips, “No, their advertising hasn’t reached me.” They share a chuckle and move on, unfazed and fully accustomed to the bonkers news cycle in a post-Trump world.

When the episode was first written, Lehmann couldn’t have predicted the timeliness of the Pruitt joke. After all, there’d be no way of knowing that the disgraced EPA chief would resign less than four weeks before the series was set to return. “The timing worked out for us,” he says with a laugh. “Look, at least for me, I’ve had a really hard time writing comedy and jokes in the world of Trump, because there’s a lot of sad things going on that are sort of happening outside of our control. So part of jumping four years into the future was to paint a world that has some sort of light at the end of the tunnel, where some of these criminals are actually being brought to justice, [and] some of these people are getting punished for the horrible things that they’re doing.”

Ultimately, Lehmann’s goal was to keep Casual as “fun and light” as possible, while “dropping little hints in here and there” to show that “the world is not destroyed in four years. You mix and match what is possible and what is aspirational, and this is what we came up with” — a not-too-distant future where Trump probably isn’t president and virtual-reality dating and self-driving Ubers are part of everyday life. “The show already has enough moments that are sad and melancholy enough without thinking that it takes place in the sort of awful world that we could be looking at four years from now.”

For more from our chat with Lehmann about the Casual series finale, click here.