Advice-column-ghostwriter-turned-feminist-anarchist Plum Kettle faces a crucial choice in Dietland‘s Season 1 finale: Go back to bemoaning her life as the victim of the dissatisfaction industrial complex (aka patriarchy, and the beauty norms that go along with it), or stand with some women who are determined to disrupt the system via any means necessary.

The AMC series’ season-ender, which aired Monday, finds Plum deciding to stay with the women of the terrorist group Jennifer — despite leader Soledad’s offer to let her pretend she was just their hostage all along.

Series star Joy Nash says Plum’s decision is a no-brainer. “What Soledad is proposing is worse to her. Yes, you’re ‘safe,’ but you’re alone, once again. She’s choosing not to be alone,” she tells TVLine, laughing. “She’ll be with people who might get her killed, but it’s not alone.” 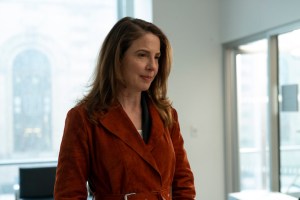 The life-changing moment comes at the end of an hour that also includes: Julia’s arrest by the FBI (thanks to Verena’s meddling), Sofia’s death at the hands of the police (as a way to buy time for Soledad and Plum to escape after Soledad is publicly named as the group’s leader), and Dominic’s struggle between his allegiance to new boss Kitty and his desire to do the right thing.

Read on for Nash’s thoughts on the episode.

TVLINE | What do you think kicks Plum into overdrive when she starts running after the car?
[Jennifer] was a place where she was appreciated and she felt seen. And yeah, she climbs in the car with her girls. They just experienced something really horrific with their friend dying, with Sofia being shot. I guess it just pushes Plum into it.

TVLINE | I was struck by how Sofia, and then Soledad, referenced Plum’s weight. I was like, “Is there no place where this woman can relax and not have people comment on her physicality?”
Yeah. [Laughs]

TVLINE | Do you think she expected to run into that kind of thing there?
I don’t know. It didn’t bump for me, as we were doing it. It felt real. Your body never goes away, and what they were doing does require physical fitness. That’s something they’re really concerned about. So I wasn’t offended that they had to bring it up. But yeah, I hear that. It’s always just one more little dig, one more reminder that you’re still you! [Laugh]

TVLINE | I like Plum a lot, and it bummed me out that there’s nowhere completely safe for her.
Maybe there is, but this probably is not it. [Laughs] 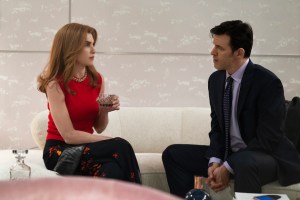 TVLINE | I have written in my notes: “This show is not about Dominic.” But…
[Laughs loudly]

TVLINE | Do you think Plum would understand the struggle he’s having right now?
I’m not sure. Wasn’t that scene with him and Eladio in the beauty closet so great? Here are the boys, talking about the girls, in the land of makeup. I just thought it was really f—king cool.

TVLINE | I liked it! We see Plum dreaming about him, he’s clearly still thinking about her. This is not a straight-up romance, but how is she feeling about him at the end of the season? Does the hope she says she’s found extend to the romantic side of her life?
Yeah, I think so. I don’t know too much about what they’re planning for a second season, if we get a second season, knock on wood, cross those fingers. But I feel like that would be really cool to explore. She finally loves herself and loves her body. Wouldn’t it be cool if she could find somebody else who appreciated it, also?

TVLINE | Plum was raped two episodes prior to the finale. I’m interested in what kind of feedback you got about that?
It was pretty rough. It’s sort of the same reason I love The Handmaid’s Tale. I feel like that’s what life is really like: You just get s–t on, and you think that’s as bad as it can get, but you’re wrong. [Laughs] You know what I mean? It can get worse, and worse, and worse. What’s interesting to me is watching a person who refuses to die, who refuses to roll over and give up. That whole episode is a rollercoaster. She’s really abandoning her friends and hurting a lot of people. Finally, this happens to her and it turns the page that makes Jennifer the best option at the time.

TVLINE | As we end the season, Plum is basically in charge of Jennifer’s public relations and marketing plan. Kitty really wants to talk to someone who can speak for Jennifer. What do you think about the possibility of Kitty and Plum coming face-to-face on this new playing field?
That would be really, really interesting. That would be really cool. I can’t even imagine how that would go. Their power dynamic was so different, at least before with Kitty having all the power and Plum none of it. It would be interesting to see them on a more interesting playing field.

I feel like this is such an interesting jumping-off point. We’ve passed [the events of] the book. We’re off the map. Here there be dragons. I’m just excited to see where it’ll all go — if and when we get another chance to do it.

What did you think of Dietland‘s season finale? Grade the episode via the poll below, then hit the comments with your thoughts.