Warning: This post contains spoilers from the series finale of Girlfriends’ Guide to Divorce.

After five seasons of Champagne, cute outfits and all manner of romantic crises, Girlfriends’ Guide to Divorce ended Thursday — and up until a few minutes before the credits rolled, life for the Bravo series’ five central females was on a serious downswing.

Abby was sad that Lily was considering a college all the way across the country and sadder still that she and Mike couldn’t make co-habitation work. Jo was stuck seesawing between fully committing to Albert and giving family life with Frumpkis another shot. Barbara’s new job opportunity created friction between her and Abby. Phoebe and Tony hit yet another rough patch, this one regarding whether or not he was a fit father for Delia’s baby. And Delia, in turn, toyed with terminating her pregnancy because of all the drama Tony brought to the equation.

How did it all shake out? Read on to find out where your favorite ladies wound up by the end of the hour.

PHOEBE | Though still happily enmeshed in a relationship with Tess, Phoebe worried that her brother was spinning out of control in reaction to his impending fatherhood. She was right. Tony came home drunk one night after an extended absence and broke a vase, which gave Phoebe all the ammunition she needed to launch into how he wasn’t equipped to be a dad. He moved out in anger.

DELIA | After witnessing all of the strife her unplanned pregnancy was causing between Phoebe and Tony, Delia made an appointment with her obstetrician but agonized about whether or not to have an abortion. Off a tip from Abby & Co., Phoebe showed up at the doctor’s office and lent her friend her unequivocal support in whatever choice she made. Then, the two women went into the examining room together.

JO | Hot baker dude Scott returned to town with a fiancée and an apology for the cowardly way he bailed on Jo a while back. But Jo had other guy trouble on her mind: Should she choose Albert, who patiently reminded her that he loved her and they could have a great life together, or ex-husband Frumpkis, who was clean, sober and newly reinvested in creating a home with Jo and Zooey?

BARBARA | When a local market offered Abby’s effervescent business partner a gig co-hosting a morning talk show, she grabbed it. This irked Abby, who saw the move as a betrayal of the brand they’d built together. Though Barbara maintained that she was stepping back from, but not leaving, Lady Parts, Abby wasn’t on board with the change. 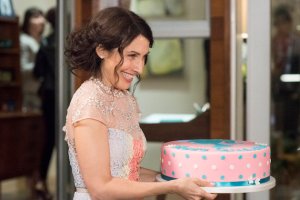 ABBY | Our harried heroine went overboard planning Lily’s high school graduation party in order to distract herself from the cold shoulder Mike was giving her after she asked him and his kids to move out of her place. She held out hope that they could remain a couple despite the change, but her friends warned her that all was probably lost with the youth baseball coach.

Rather than deal with how bereft she felt, both about Mike and about Lily’s enthusiasm for attending college at Emerson in Boston, Abby told Jake they should buy their daughter a car, then dragged him to the Valley to look at a used heap of junk that ended up dying while they were out for a test drive. Stuck in the middle of nowhere and in danger of missing Lil’s graduation ceremony, the ex-marrieds fought, apologized, counseled each other on their current love lives, got covered in motor oil, commiserated about their imminent empty nest and eventually found an Uber that got them to the graduation in time to see their little girl graduate.

Though the occasion was a happy one, Abby was inching toward depression at Lily’s party. During a low moment, she and her pals gathered on the patio for a bittersweet recognition of how they all had to do what was right for them. Then, Barbara, Phoebe, Delia and Jo went inside as Abby pulled herself together and prepared to present the cake. As she walked into the house…

… there was a time jump, and suddenly, we were at a bash celebrating Lily’s college graduation from Emerson. And pretty much everyone was there, which made it easy to see how circumstances had shaken out. (Spoiler alert: Almost everyone got a happy ending.) 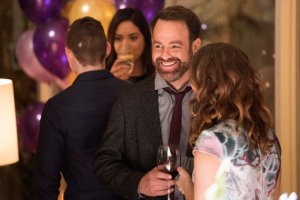 * Phoebe and Tess were still together.
* Delia obviously chose to keep her baby, because she was there with her toddler daughter. Though Tony wasn’t in attendance, she mentioned that he was taking care of the girl the next day, so there’s at least a co-parenting situation happening there.
* Though Frumpkis and Scott were at the party as a momentary fakeout, Jo chose Albert (yay!) and was pregnant with his child.
* Barbara showed up with an attractive new guy; from a brief conversation she and Abby had, it seemed they were selling Lady Parts and launching another.
* Jake married, and divorced, Natalie.
* Abby and Mike are still together — in fact, they got married — but living in separate houses because that’s what works for them.
* Becca was there (um, OK?) with Taye Diggs’ kid!

Now it’s your turn. What did you think of the finale? Grade the episode via the poll below, then hit the comments to elaborate upon your thoughts.