Warning: This post contains major spoilers from the Season 2 finale of The Handmaid’s Tale. Proceed accordingly, under His eye.

If you can just get past the constant fear that Elisabeth Moss’ character is doomed to die a sex slave in a patriarchal hellscape, The Handmaid’s Tale executive producer Bruce Miller says, the Hulu drama really is an uplifting tale.

“I believe in June,” he told reporters on a recent call regarding the series’ Season 2 finale, which began streaming Wednesday. “If June’s story is the story we tell, we’ve told it because it’s a story of hope. I do feel like every episode where it ends in ‘June is alive’ is a huge victory and a story worth telling, to see how someone in this world doesn’t just survive but in their own way finds ways to live, finds ways to actually have a life, have intimacy.” 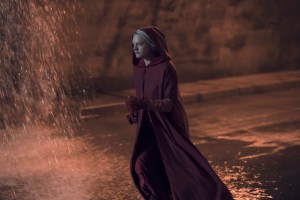 June certainly is alive by the time credits roll on the season-ending “The Word,” which does conclude with a whole lot of hope… for Emily and baby Nichole. As the former Ofglen climbs into the resistance van that’s poised to take her to freedom, she beckons to June to hurry up and join her. But June, feeling she’s deserting older daughter Hannah to grow up under Gilead’s oppression, hands her infant to her friend and stays behind instead as they speed to safety. (TVLine will post a detailed recap of the episode later today; in the meantime, check out our post mortem interview with series star Yvonne Strahovski.)

Mind you, just because Miller and the show’s staff thought June’s decision was the most natural one for her to make doesn’t mean they were on board with it. “There was an incredible amount of pushback from me and everybody else,” he said. “All we want is for her to get out.”

Read on for Miller’s thoughts on the finale and the forthcoming Season 3, as they pertain to:

OFFRED’S CHOICE | Once the show’s writers began to understand how the prospect of leaving Hannah in Gilead would tear June apart, Miller said, they knew how the episode was going to end. “I don’t think it’s a choice about whether you’re going to stay behind and try to rescue your child. I think it’s a need,” he explained. “It’s an impossible choice, but we are faced with those all the time. So it’s interesting to see what she does.” 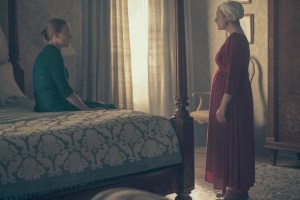 SERENA’S REGRET | Though Mrs. Waterford gave her blessing for June to ferry Nichole to safety, the EP previewed that Serena — who now also is missing a finger for daring to suggest that little girls should be taught to read The Bible — might have remorse over the decision. “Is she going to find something else to focus on? Is she going to stay bereft and empty and live in Gilead, or is she going to find a way to get her daughter back?” Miller asked. “All those things are possible.”

AUNT LYDIA AND COMMANDER LAWRENCE’S FUTURES | Miller assured reporters that Ann Dowd, who plays the rigid handmaid handler, and Bradley Whitford, who debuted this season as the loose cannon architect of Gilead, will return for Season 3. 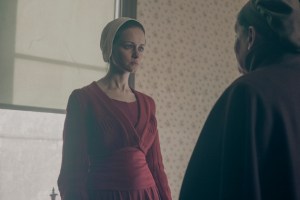 EMILY’S TRAJECTORY | “We have not seen the last of Emily and Nichole,” Miller said. “We will be following them.” The baby, in particular, “is quite a popular young girl,” he added. “There’s lots of people who want her, including a whole country of Gilead, if she happens to get out.” (Editor’s note: We’re trying not to worry about the “if” in that last sentence.)

LUKE AND MOIRA’S CRUSADE | June’s husband and best friend “have definitely turned a corner in terms of their feeling about how much they can affect the lives of people in Gilead,” Miller said. For Luke in particular, ever since meeting Commander Waterford during the Canada trip, “the focus of his fury is Fred. All of a sudden, Gilead and the Gilead system has been reduced to Fred Waterford,” Miller said, “and he’s going to find a way to get Fred.” 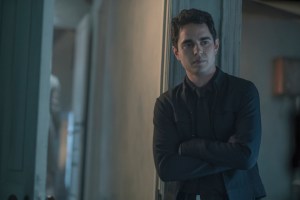 NICK’S STAND | The unplanned, forceful way Nick stopped Fred from going after June toward the end of the episode is “not a Crayola crayon he goes to very often,” Miller said, laughing. “He’s not an impulsive guy, in general, and I thought it was such a measure of the closeness of his relationship with Offred and how much he was willing to risk.” Still: “Yes, there will be repercussions” for the Guardian, Miller previewed.

GILEAD’S REACH | Though the Gilead movement has taken over all of the continental United States, “There’s lots of areas that are not nearly as well-controlled as the Boston area,” Miller noted, adding that there are “lots of pockets of resistance and unease, and places where the grip of Gilead is not nearly as firm.” He chuckled. “We’re a very big, very ornery country, and it’s hard to keep us in line.”

THE COLONIES AND JEZEBELS’ REAPPEARANCE | The series’ action likely will return to both locations in the future, Miller said, hinting that we might also see different colonies where other menial — though not necessarily life-threatening — work takes place. For instance, “I’d love to see the factory where they make handmaid costumes,” he said. “I would love to continue to dive deeper into how Gilead uses the discarded people, how they use the discarded women.” He also noted that he’d like to explore other similar spots in Gilead, “secret places that men have built for themselves to escape the other world they built for themselves, which I just think is sad and awful, and also fascinating.”