Hollywood’s track record with adapting the works of Stephen King is spotty at best: For every Carrie or It the movie, there’s a Dark Tower or It the miniseries. So Hulu was smart to adapt not just a single novel from the horror master, but all of them at once, creating a sort of Stephen King extended universe. The result: the new anthology Castle Rock (debuting Wednesday, July 25), an effectively eerie patchwork of King’s most famous stories that’s reminiscent of Fargo and American Horror Story, with genuine scares and a wealth of strong performances. 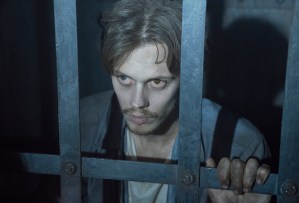 As you might have guessed from the title, the series is set in the town of Castle Rock, Maine: the fictional location of King books like Needful Things and The Dark Half. The story kicks into high gear when a forgotten prisoner — a sunken-eyed, feral beast played by It breakout star Bill Skarsgård — is discovered inside an abandoned wing of the corrupt and crumbling Shawshank Prison. How did he get there? And what’s wrong with him, exactly? Death-row attorney Henry Deaver (The Knick‘s Andre Holland) is brought back to his hometown to unravel the mystery… and he has a traumatic childhood memory of his own to untangle as well. (Castle Rock actually shares several themes and tones with HBO’s Sharp Objects, which also premiered this month.)

The creep factor here is high: Castle Rock is a town plagued by suicide and macabre murders, and it almost seems like violence is a contagious disease there, attaching itself to whoever happens to wander into town. The first four episodes screened for critics serve up a healthy number of old-fashioned jump scares, with plenty of ominous strings and piano on the soundtrack. It never gets as gory, or as WTF crazy, as American Horror Story — I’d actually like to see it lean more fully into the supernatural in the weeks to come — but there’s a consistent sense of encroaching dread that keeps you on edge. And that feels true to King’s work, which tends to be more psychologically disturbing than graphically gory. Then when true horror does strike (as it does in Episode 4), it lands like a sledgehammer.

The narrative weaves in plenty of sly King references for eagle-eyed fans: the Mellow Tiger bar; a faded newspaper headline that reads “Rabid Dog Tears Through Town”; Juniper Hill Psychiatric Hospital; the frequent King protagonist Alan Pangborn, played here by Scott Glenn. Castle Rock is “based on characters and settings” by King — who serves as an executive producer, along with J.J. Abrams — and if you’re a King fanatic, you’ll be happily spotting Easter eggs left and right. Like FX’s Fargo, this series is remixing familiar source material, honoring the past while blazing its own trail; it helps that Fargo helmer Michael Uppendahl directs three of the first four episodes, since he’s found gold before in similar terrain. 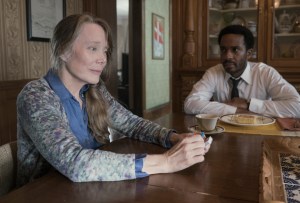 It also helps that Castle Rock is anchored by a superb cast. Holland is a top-notch actor and has an appealing screen presence as Henry; he exudes a quiet integrity, like a 1950s matinee idol. As the nameless mystery prisoner, Skarsgård is absolutely commanding and chilling without even having to say a word. Togetherness vet Melanie Lynskey is fantastic as usual as jittery pill-popper Molly Strand, who has a decades-old connection to Henry. Plus, there’s Jane Levy, and Noel Fisher, and Carrie herself, Sissy Spacek… the cast is an embarrassment of riches, and helps to bind together the wide-ranging assortment of King references.

The early episodes are a little scattered, plot-wise, trying to juggle a multitude of narratives across several timelines, and it takes a while for the storytelling to find its footing. But the Henry Deaver and Skarsgård threads are strong throughout, and the more you learn about this town, the richer and more enthralling the story becomes. Even if you’re not an avid Stephen King reader — and especially if you are — there’s more than enough here to keep you hooked.