Her hometown of Wind Gap, Missouri? Doesn’t make the cut. For Camille, Wind Gap is full of terrible memories — a fraught relationship with her cold mother, unsettling encounters with teenage boys down by the lake and, most traumatizing of all, the puzzling death of her younger sister, Marian.

But in Sunday’s premiere of Sharp Objects — HBO’s limited-series adaptation of Gillian Flynn’s novel — Camille (played by Oscar nominee Amy Adams) is forced to go back to Wind Gap after a young woman goes missing there, one year after another girl in the town was strangled to death. Camille, now a reporter at a St. Louis newspaper, is assigned to cover Wind Gap’s latest disappearance, which means having a reluctant reunion with her hometown and the distressing memories she’s been trying to suppress.

When Camille first arrives in Wind Gap, she doesn’t have much luck getting information about Natalie Keene’s disappearance. The town’s police chief, Vickery, wants to keep a lid on the whole thing — despite Camille’s suggestion that a little publicity could be good for the case — and Det. Richard Willis (The Mindy Project‘s Chris Messina) isn’t willing to discuss who’s being considered as a suspect. (Two men in the town immediately jump out as potential perps, though: Natalie’s brother, John Keene, and Bob Nash, the understandably-hardened-but-still-kinda-strange father of Ann Nash, the young girl murdered in Wind Gap a year ago.) 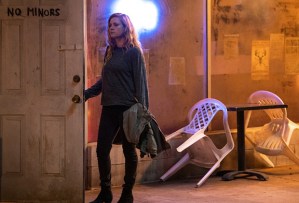 Still, the investigative hurdles that Camille has to jump over are nothing compared to what she’s enduring at home. Rather than stay at a crummy motel on the edge of town, Camille swallows her pride and goes back to the house she grew up in, where she’s greeted by her mother, Adora (a wonderfully frosty Patricia Clarkson). There’s a catch to Adora’s hospitality, though: She has no patience for any discussion of Natalie Keene, Ann Nash or the terrible things that have happened to them. She’ll barely even let Camille say the girls’ names in her house, and the longer Camille remains in Wind Gap, the more embarrassed Adora seems to become of her eldest daughter, particularly after Camille gets drunk one night and sleeps in her car outside the local bar. (“Did anyone see you?” Adora asks, fully scandalized.)

And then there’s Amma, Camille’s half-sister, who was born long after Camille left Wind Gap. When Amma is out with her friends, she smokes and dresses provocatively — but when she’s at home, she puts on an act for her mother; she’s all floral dresses and hair bows and hands neatly tucked behind her back, like she’s a human china doll. But Amma gives off a slightly sinister vibe, too: When she and Camille have a moment alone in the upstairs hallway at home, Amma hugs her half-sister one too many times, fawning over Camille’s beauty and her reputation for being a rebellious child. “I’m incorrigible, too,” Amma says with a smirk. “Only [Mom] doesn’t know it.”

It’s immediately clear that there are plenty of reasons for Camille to dislike Wind Gap, and before the series premiere ends, another one gets added to the list: Natalie Keene’s body is found in an alley, posed uncomfortably on a window ledge, and Camille is a witness to the grisly scene. Throughout the debut hour, Camille had already been having disturbing flashbacks to her childhood — including the night her little sister suddenly died — and the sight of Natalie’s corpse seems to stir up even more unsavory memories for Camille.

Later that night, Camille returns home and draws herself a bath — and when she gets into the water, we get a closer look at her skin, which is covered, head to toe, in scars from her cutting habit. They aren’t just lines, though; they’re words. Earlier in the episode, we had caught a glimpse of Camille’s office desk, which also had words carved into it, as does her car, which has the word “dirty” written in the dust on the hood.

But it’s Camille’s body that seems to have the most extensive vocabulary, and the last shot of the hour brings a word on Camille’s right arm into focus: “vanish.”

OK, your turn. What did you think of Sharp Objects‘ first episode? Grade the premiere in our poll below, then hit the comments to back up your choice!