Rosario Dawson is on the hunt for a killer at USA Network: The actress will star in the network’s drama pilot Briarpatch, our sister site Deadline reports.

The project — adapted from Ross Thomas’ novel by Andy Greenwald (Legion) and executive-produced by Sam Esmail (Mr. Robot) — follows Allegra “Pick” Dill (Dawson), a Washington investigator who returns to her corrupt Texas hometown after her homicide-detective sister is killed by a car bomb. Allegra’s search for the murderer turns into a dangerous excavation of her own past.

* Brooklyn Nine-Nine stars Stephanie Beatriz and Melissa Fumero will guest-star on One Day at a Time Season 3, executive producer Gloria Calderon Kellett announced via Instagram. Beatriz will play Penelope’s cousin Pilar, whom Elena is convinced is gay, while Fumero will portray Estrellita, who used to be close to her cousin Penelope before the rift between Lydia and Estrellita’s mom (Gloria Estefan) drove them apart.

* ABC will air the four-hour special The Story of the Royals across two nights on Wednesday, Aug. 22 and Thursday, Aug. 23 at 9/8c.

* Burden of Truth has started production on Season 2 for a winter 2019 premiere on CBC in Canada. The series — which stars Kristin Kreuk (Smallville) and Peter Mooney (Rookie Blue) — makes its U.S. debut with Season 1 on Wednesday, July 25 at 8 pm on The CW.

* Reese Witherspoon’s production company Hello Sunshine will launch a VOD channel on DirecTV, DirecTV Now and U-Verse with two programs: the unscripted series Shine On With Reese (premiering July 17), about extraordinary women who have created their own unique paths to success, and The Home Edit’s organization show Master the Mess (Sept. 4). 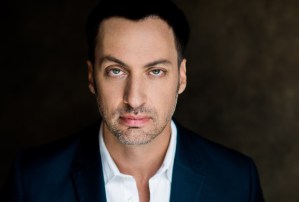 * Netflix’s Santa Clarita Diet has tapped Stephen Full (Dog With a Blog, I’m in the Band) to recur during Season 3 as Janko, a suspicious desk clerk at the Serbian Consulate.

* More Cold Justice will be served when Oxygen airs new episodes of the true-crime series starting Saturday, Aug. 4 at 6 pm.

* Freeform is developing Jasmin Rosemberg’s book How the Other Half Hamptons into a series about three best friends who, for 16 weekends, inhabit a 10-bedroom Hamptons house with 40 strangers, Deadline reports. Kelly Ripa and Mark Consuelos’ Milojo Productions is behind the project.

* Netflix will launch a stand-up comedy event series in 2019, featuring 47 comedians from 13 regions, to be recorded at the upcoming Just for Laughs Festival in Montreal, as well as in São Paolo, Mexico City, Mumbai, Berlin and Amsterdam. Participating U.S. comedians include Chris D’Elia, Nicole Byer, Neal Brennan and Nick Swardson.