Wow, that Jane the Virgin finale twist… straight out of a telenovela, right?

Throughout April’s Season 4 finale, Jane was waiting for Rafael to pop the question, and it looked like she was finally ready to embrace a new relationship following the untimely death of her husband Michael. But after Raf visited criminal mastermind Rose in prison, his mood suddenly darkened, and he hit the bottle hard. Jane thought Rose had shared unhappy news about Raf’s birth parents… but it was much crazier than that. 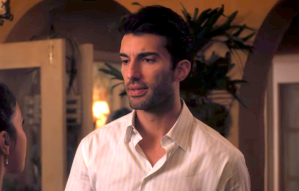 Jane gently nudged Rafael to share what he found out, but he stayed tight-lipped through Alba’s citizenship celebration… and whirlwind wedding to Jorge. (He did reassure Jane that “I am definitely not your brother,” which would certainly be quite the telenovela twist.) Jane told him that “whatever it is, we’ll deal with it together, because I love you, and you’re it for me… forever.” Those words of comfort inspired Raf to invite Jane over to his place later that night: “I have to do something.”

When Jane knocked on Rafael’s door (“ready for her life to change,” the Narrator warned), she thought she’d find him on one knee with a ring in his hand. But instead, a grim-faced Rafael confessed that he lied to her earlier: Rose didn’t tell him about his parents. Jane asked what she did tell him, and Raf opened the door to reveal… Michael Cordero! Back from the dead! Jane’s jaw dropped as the Narrator capped the season with a teasing “Surprise!”

So was that really the same Michael that Jane knew and loved? “It’s not a surprise twin, that I can tell you,” showrunner Jennie Urman told TVLine in a post-finale Q&A. But she wouldn’t confirm that the man we saw was exactly the Michael we remember, either: “That is… going to be answered in the beginning of the fifth season. Rose has amazing face-swapping capabilities, as we’ve established.”

We do know that bringing characters back from the dead is a major telenovela staple, and that the return of Michael will definitely complicate Jane’s relationship with Rafael. (She was about to accept his proposal of marriage… and now her dead husband is back!) And we also know that Jane‘s upcoming fifth season will be its final one, so expect the show to pull out all the storytelling stops as it ramps up to its series finale.

Did Michael fake his own death? Will Jane choose him over Rafael? Or is this new guy just an imposter? Vote in the poll below to let us know how you think the cliffhanger will resolve when Jane returns… but not until midseason. (Grrr, we know.)