Ladies annnnnnd gentlemen! If you thought that GLOW‘s awesome ’80s wrestling moves were gnarly, series star Chris Lowell says, wait until you see what Season 2 throws up against the ropes.

The new episodes, which begin streaming Friday on Netflix, follow the titular Gorgeous Ladies of Wrestling as they struggle to make their fledgling sports soap opera a success… or, at least, keep it from getting cancelled. A huge part of that? Bigger — and therefore, more dangerous — wrestling moves for the troupe led by Alison Brie and Betty Gilpin.

“There’s some s–t they do in Season 2 that I could not even wrap my head around, watching it,” Lowell tells TVLine. “It felt like Season 1 was a lot more, you know, ‘We’re going to do this two times and that’s it, so let’s make sure we get it,’ and Season 2 is like, ‘All right, after you back flip off Chavo [Guerrero Jr., fight coordinator], can you just jump into that pile of chairs?'”

He laughs. “And what’s insane is that all these women are just raising their hands to be the first one to do it,” Lowell adds. “They are so committed, and it shows.”

While Lowell isn’t at liberty to divulge much about his character’s Season 2 path, let’s just say that Bash has heretofore unexplored levels of both comedy and pathos that will become apparent over the course of the season. And, of course, he’ll continue as GLOW‘s enthusiastic ringside announcer, a process we discussed in detail when Lowell recently stopped by TVLine’s New York offices.

TVLINE | I read that while you’re announcing, you prepare by watching the women rehearse and then jot things down.
Yes.

TVLINE | Have you ever said something that caused the director or someone to say, “Let’s tone it down a bit”?
[Laughs] Oh, absolutely. 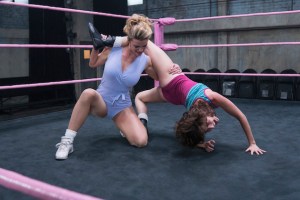 TVLINE | Can you give me a for instance?
The way it typically works is, the writers have written these episodes weeks in advance, so they don’t exactly know what the fights are going to look like. They have an idea of the emotional battle that happens and the victories, and the failures, you know, and so they usually throw in a couple of zingers for me. But it’s not until we get there on the day [of shooting] and the fights actually been choreographed… That’s when they let me go on a roll… Usually the times that they reel me back in is when I’ll start just swearing profusely. [Laughs] I’ll start getting really graphic with my language, and they’re usually like, “No, Chris. None of this is going to make it.” That’ll happen occasionally, but you know, you have to be careful because so many of these characters are politically incorrect.

TVLINE | Right.
And so you have to really keep an eye on yourself too, to not let things go too far. But I think I’ve got a pretty good handle on it. And what’s great is that I have the confidence and the support of [series creators] Liz [Flahive] and Carly [Mensch], and all the other writers and the directors, and the cast, that it makes it feel like I know what I’m doing and that I can handle what they’re throwing at me.

TVLINE | I assume you’re not announcing while the fights are actually going on. They shoot you later?
It’s actually pretty crazy. Usually what happens is, they’ll do a full dress rehearsal for me so I’ll be able to see what the actual fight looks like… And then I’m usually not saying anything when the coverage is on them, and then when it comes around on me, either the actors if they’re still there will mark it just for their safety, or the stunt team will do the whole thing.

But usually by the time it gets to me — because I’m usually the last one to be shot for those sequences, which I prefer because it gives me time to really see what’s happening, get the pace and kind of brainstorm ideas. Typically, for me, I like it more when there is nothing going on behind the camera, because frankly I get so flipped out watching the fight and I get so nervous and distracted by what’s actually happening that it’s hard to do it to focus on anything else.

TVLINE | Bash has quite a hairdo. I’m wondering how long it takes you to get your hair done each day.
Oh, it’s a whole process. It’s a whole process. Yeah, usually what it is, is I go in in the morning. They soak my hair and then just massage a bottle of mousse into it, and they blow dry it back and then take this little curling iron and individually curl it all, and then they just blast it with hair spray throughout the day. I am the most flammable thing on set.