Girlfriends’ Guide to Divorce kicked off its final season Thursday with cocktails, a red carpet, a pregnancy test and some contentious pastries.

The Bravo drama spent the hour, via flashbacks and looping storylines, catching us up on everything that Abs, Barbara, Jo, Delia and Phoebe had been up to since the Season 4 finale. But before your Moët & Chandon loses its bubbles, so here’s the gist, broken down by character:

ABBY | Though she and Mike thought they’d been discreet, Charlie walked in on them in bed one morning and barely noticed at all: He knew they’d been dating for a while. Once their relationship was out in the open, Abby’s next dilemma came when Mike was offered his dream job… but it meant that he’d be working for the same organization as his ex-wife. In an effort to be “ballsy,” Abby suggested that he and his kids move in with her and hers, and he later accepted the invitation. As they reveled in the decision, Mike wondered whether she’d asked him in response to the now-sure-to-be-constant-presence of his ex. Of course, Abby denied it. But her face as they embraced  told a different story.

PHOEBE | Phoebe’s problematic ex-con brother, Tony, kept texting her until she relented and let him come visit. But when he asked to borrow her car, she threw the keys at him, yelling that he hadn’t changed and that she was through with him. He surprised her, then, when he returned the car a few weeks later, its dents buffed out. Though wary, Phoebe introduced him to her children and offered him a place to stay for a while. 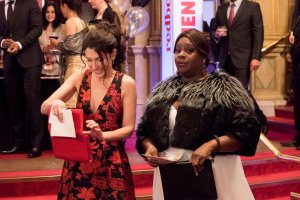 BARBARA | After the passion of their new relationship cooled, Barbara started finding fault with much of what Darrell did and said. When Darrell suggested that her enmity with  her former husband Leon wasn’t any good for their son, she grudgingly started talking with her ex. But that talking with Leon turned into friendliness with Leon, which seems like it turned into sex with Leon. And rather than confess the affair, Barbara nitpicked at Darrell for being too good of a guy, then broke up with him.

JO | Jo launched Shyne juice bar next door to her Rize bakery, thanks to a cash infusion from a happy-to-give Albert. But when the stress of running two business got to her, she started to see his advice as mandates and chafed at his involvement in her business. So she took out a loan to pay him back, which he thought was ridiculous. But then they declared their love for each other all over again, and all was well.

DELIA | Delia thought she was pregnant with Paul’s baby, but it was a false alarm — which made both of them unexpectedly sad. After he lost his bid for city council, Paul revisited the subject and asked Delia if she wanted to have a child with him. After much deliberation, she said she did… which he interpreted as “I also want to get married.” So he proposed at her office, which made her freak out. She ultimately turned down his ring and his offer to start a family without a marriage certificate, saying that she’d tried to change what she wanted in order to be with someone before, and it had gone very badly. Paul saw it differently. “I think that you don’t want to be happy,” he told her.

Now it’s your turn. Grade the premiere of Girlfriends’ Guide to Divorce, then hit the comments with your thoughts!