Warning: The following contains a particularly killer spoiler about Tuesday’s Animal Kingdom. You know what to do if you’re not ready to find out whodunit.

Way to catch us off guard, Animal Kingdom! In the opening moments of “The Center Will Hold,” the TNT drama flashed back to Baz’s shooting in the Season 2 finale. Only this time, instead of stay with the vic and Lucy, the scene took us with the killer to her getaway car. Yep, her getaway car! Mia murdered Baz! “Todo bien?” asked the driver, that older Trujillo who I think is her father. And in fact, things were so fine with Mia that she went right back to sipping her coffee as if nothing had happened. (Question remains, did the Trujillos whack Baz on orders from Smurf?) From there we jumped to present-day, and if you read on, while you catch your breath from that revelation, I’ll tell you all about how the unlikely tag team of Pope and J began reuniting the Cody clan.

‘EVEN GRANDMAS NEED MONEY’ | In prison, Smurf approached Alvarez about the job she’d proposed: If the Cody boys hit the pill mill that the con had previously targeted with her boyfriend, they could score a fortune and take home 30 percent of the haul. When Smurf, as you’d expect, balked at that cut, Alvarez pointed out, “This is my job. You’re just the hired help.” But, since she’d been taught to respect her elders, fine, Smurf & Co. could have 35 percent. Meanwhile, at Casa Cody, Nicky combined seduction and gun talk in hopes of convincing J to take her with him to case a job. #fail Later, she interrupted Craig and Ren getting busy in hopes of scoring a bump. #failthesequel (Not having a great day, our darling Nicky.) While she went back to sulking around the house, J met up with Mia, who demanded yet another payment (since the one he’d just given her was for the prior week). When he asked for another extension, she agreed — if he’d “do something with her” later that day.

‘GOOD TALK’ | At the bar, Deran and Craig caught up — at first by lamenting the gentrification of The Strand and mocking one another’s hair: Craig said Deran’s new do made him look like a Safeway produce manager; Deran said Craig’s old one made him look like a bass player in a Kings of Leon cover band. When they got down to the nitty gritty, Deran insisted that he wasn’t going to J’s meeting about their next heist; he was done with family jobs for now. And no, neither would he lend Craig 2k to rent a new place with Ren, nor would he cut his brother in on his next job. “I’m all manned up,” insisted Deran, who denied that he was freezing Craig out because he was pissed that he’d split for Mexico. Back at Casa Cody, Craig tore up the place in search of cash. All he really found was Nicky, day drinking and lamenting how unpopular she was with his brothers. Shortly thereafter, while out getting a car wash, Nicky ran into old friend Sarah and, desperate to impress the co-ed, invited her over that night. And, uh, sure, she could bring some friends. There was enough coke for everybody. (Why did I sense #failpartthree coming?) 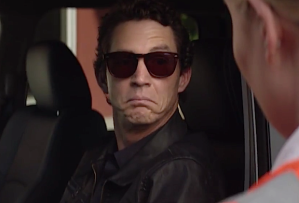 ‘A GROWN MAN SITTING OUTSIDE AN ELEMENTARY SCHOOL IS CREEPY’ | Dropping off Lena at Hunter Rawlings, Pope assured her that, in spite of her trepidation, she was going to like the posh academy. And no matter what, he’d be right there when school let out. Later on, we found out that he meant that literally. He wanted to stay parked in front of the school all day — and would’ve, too, had a crossing guard not threatened to yank his niece out of class. Suddenly having some free time on his hands, Pope pulled out Baz’s Jeep and tried his hand at playing detective. When J found him there, Pope said he was just cleaning it up to give it to Lena. “She’s 7,” J noted. Give it to her eventually, Pope replied. Since no one had gone to J’s job meeting, Pope revealed to his nephew Baz’s idea about flipping iPhones. Unfortunately, it would take a coupla weeks to set up, and J didn’t have a coupla weeks. He had an idea, too, though. One that he swore to his uncle wasn’t Smurf’s: a pill mill. 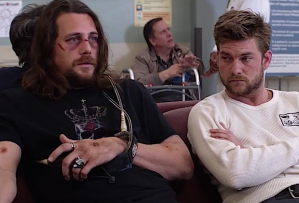 ‘NEITHER OF US IS REALLY THE LIVING-TOGETHER TYPE’ | Desperate for cash, Craig visited an old friend and tried to collect a $600 debt… by chasing him across rooftops to shake him down. When Craig accidentally knocked the guy off a roof, he did try to save him, but thanks to a shoulder injury couldn’t hold on. “It wasn’t my fault,” Craig insisted to Deran as he tried to reset his brother’s shoulder in familiar fashion. When that didn’t work, they hit the hospital. Sorry, not in a robbing way; I should’ve made that clear. In the waiting room, they learned from a nurse that the guy who’d fallen wasn’t doing so hot. Oh, and the nurse was a fellow named Linc who apparently was one of Craig’s favorite X Games stars. “You’re a legend,” Craig said. “Was,” Linc replied. By and by, Ren arrived to take Deran’s place, and broke it to her boyfriend that she wasn’t getting a new place with him, she was getting it with her friend Jennifer. He was still welcome to come over anytime, however.

‘I SHOULDA LISTENED TO WHAT THEY SAID ABOUT YOU’ | When J gave Pope the lay of the land at A1 Naturals — aka the pill mill — his uncle suggested that if there was a basement, that might be the most discreet way to break in. But the job itself looked solid to the career criminal. Afterwards, Smurf renegotiated with Alvarez for 70 percent. “We had a deal,” she protested. “Now we have a new one,” replied Smurf before relenting and offering 50 percent. Of course, she didn’t mean it. (Have you ever known Smurf to take pity on anyone? She set up Pope to murder the woman he loved, for Pete’s sake!) By the time the hour was over, the she-devil had framed Alvarez for heroin possession. “She’s moving to isolation,” reported a guard, bringing a wicked smile to Smurf’s face. “And she’ll get another drug charge.” In other words, the Codys’ cut of the pill-mill job just rose to 100 percent. 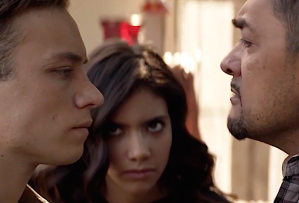 ‘YOU MUST THINK I’M SOME KINDA BITCH TO BE THAT SOFT’ | So the “something” that Mia wanted J to do with her turned out to be attend a Trujillo party… which started off with that older Trujillo (again, her dad?) scaring the bejesus out of him. But as long as J understood that he wouldn’t keep getting extensions, everything was cool. “You could have just said no to the extension,” J told Mia as soon as they were alone. “This was more fun,” she replied so mischievously that it was hardly a shock when they wound up boning in a nearby fruit cellar. They’d just finished up when J received a distress signal from Nicky. Why? you ask. Well, before her party could get started, she picked up supplies — aka loads of coke — from DJ Snowball (real name: Dylan). Since her tab was up to $1,500 — and she declined to take his beats to her bash — he refused to let her leave until she paid up or… performed a certain sexual act on him. 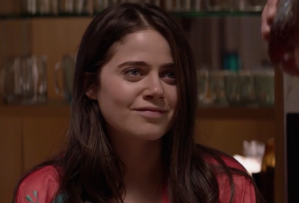 ‘SHE TOOK MY COKE’ | When J arrived at Dylan’s, the dealer still didn’t want to let Nicky go without paying up one way or the other… until her boyfriend told him that his last name was Cody… as in Pope’s nephew. After that, he and Nicky were outta there. But, since Dylan came after them with a baseball bat, Mia leapt into action and saved their asses. When Nicky introduced herself to her (latest) rescuer, Mia replied all coolly, “I know” who you are. Yet by party time, Nicky still didn’t seem to have put it together that J was cheating with this new girl — even after he turned down the same sex act that Dylan had wanted. But she had to add two and two when she learned that, while she was snorting coke with her old classmates, Mia was inviting herself to crash at Casa Cody, right? Right?

‘J’S GOT A JOB’ | After picking up Lena from school, Pope took her to Deran’s bar so that he could discuss A1 Naturals with his brother. When Deran again declined to participate in a Team Cody job, Pope angrily reminded him that “we are a family, and you’re in it, so step the hell up.” Deran didn’t say anything to that, but it was pretty clear that Pope’s message had been received. Later, Deran and Craig teamed up to blow off some steam by trashing a few fancypants condos. Hearing that Ren had no intention of moving in with Craig, Deran suggested that his brother move back into Smurf’s place. After all, she might never get out of prison. Finally, Pope drove Baz’s Jeep to the beach and set it on fire. And that was that.

So, what did you think of the episode? Last week, reader Beck predicted that Mia was Baz’s shooter, but I never saw that coming. Did you? Hit the comments.