Warning: The following contains spoilers for the Season 2 finale of Animal Kingdom.

Savvy viewers didn’t need the promo for the Season 2 finale of Animal Kingdom to hint at a death, all they had to do was watch the dozen episodes that led up to it. Hell, even just the one before! In it, Baz, having learned that Smurf had been screwing over her family, had gotten her locked up; she’d had the foresight to undermine his coup by giving her power of attorney to J; Lucy had been revealed to be far more cunning than Baz (or we) would have suspected; and Pope… poor, messed-up Pope had filled Lena’s trust fund in preparation for his suicide. So, who was on the wrong end of the gunshots heard in the teaser? And what did you think of “Betrayal”? Read on. We’ll cover the hour’s big twists, then you can assign a letter grade and discuss. 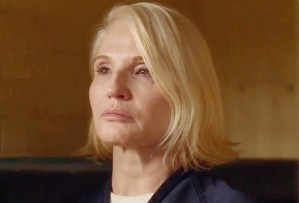 ‘I WANT WHAT’S MINE’ | As the episode began, Baz suggested to Lucy that they go to Tijuana and start looking for a place to settle down. In response, she went a step further, saying they shouldn’t bother coming back afterwards. But no, Baz wasn’t ready, and he wouldn’t be till he got back “everything that bitch took” from him — including the properties J now controlled. Meanwhile, in the big house, Smurf found herself surrounded by the protection her grandson had bought her (via that envelope she had him deliver). At Casa Cody, Pope was busy warning J about Baz when he realized it was the teen’s graduation the next day. For her part, Nicky was unsure whether she’d pass — or stab her visiting father. But that didn’t stop her from planning an after-party. At Deran’s bar, he calculated that he could launder three grand a week without raising any red flags. Natch, he and Craig remained hopeful that J would continue paying their “property manager” salaries.

Later, Pope was playing father figure to Lena when Smurf phoned J and assured him he needn’t worry about Baz yet. “He’s not as smart as he thinks he is,” she cracked. The one J should keep an eye on is Pope, she added, since sometimes he can’t help but hurt people. When Baz took J to Smurf’s lawyer to “fix” the power-of-attorney sitch, the lawyer was a no-show, tipped off by her client (who’d been tipped off by her grandson). Furious, Baz told a horrific story about J’s mother having been raped — and Smurf’s cold reaction to it (she was angry that her daughter had blown a deal) — to illustrate how little he could count on Grandma to protect him. (And suggested that the rapist was J’s father.) Back behind bars, Smurf was disturbed to learn that she’d be an inmate for at least six months or a year — maybe 20 to life. But the lead detective was willing to cut her a deal if she sold out her boys, especially Pope, since he hit six banks in one day. 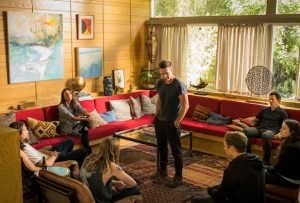 ‘NEVER TRUST AN OUTSIDER TO DO THE RIGHT THING’ | To Nicky’s surprise, she learned that she was going to graduate after all. From school, she and J headed to a family meeting so tense that everybody should have been frisked beforehand. Right off the bat, Baz made the mistake of saying he hadn’t let Craig and Deran in on his plan to take down Smurf, because hello — who would, given that their mommy issues are so severe, they could keep a team of shrinks working overtime for decades? Things only got worse when he asked J what he intended to do with the assets, and J, in turn, questioned what had been in the other vaults of his grandma’s that they’d emptied. And where was that stuff, anyway? In no time, fingers were pointed; blame, placed; and punches, thrown… just in time for Lena to walk in. (If that kid isn’t already scarred for life… !)

The following day, Pope told Baz how troubled and scared Lena was. True to form, Baz just asked his brother to look after the kid while he was in Tijuana and angrily ordered him to be more supportive of him in front of the other Codys. Visiting Smurf in the pen, J asked if she knew who his father was. She insisted that Baz was just trying to mess with his head and instructed him to have Baz come by, as she was preparing to strike a deal… and not with him. When Baz did show up, she suggested that he ask Pope about Catherine, that maybe Pope never got over Cath choosing Baz over him, that Pope would always love his mother more than he does Baz. 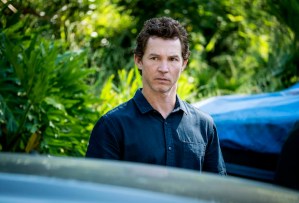 ‘NOT ONE OF YOU EVER THOUGHT ABOUT ME!’ | Speaking of Pope, he was at that moment in a fetal position in the shower. Already stretched close to the point of snapping, he answered the phone to hear his mother warn him that Baz knew about Catherine and “would be coming for you.” Holy crap — she was flippin’ setting up Pope to take out Baz for her!!! Arming himself, Pope ran to Deran and Craig, and asked them to take care of Lena if anything happened to him. (Has Baz ever done or said anything that parental?) While this dire s— was going down, Nicky broke into a classmate’s house to steal back a jacket, and in a rage, demolished a bulletin board full of the girl’s achievements. (And she was just getting warmed up.)

For an intense moment, it appeared that Pope had returned to his own place intending to kill Baz. But then he threw away his bullets — guilt eating away at him, he still wanted to die, even if it meant leaving Lena. When Baz found him, Pope admitted to killing Catherine and reminded him that he’d stolen her away only to punish Smurf for not letting him be with Lucy. Baz had never thought about what it would do to Pope — no one ever thought about him. Miraculously, instead of pull the trigger, Baz told Pope he loved him and promised to take care of him always. At the same time, Nicky and J’s robbery went up in smoke when an old man (grandpa?) happened upon them and, even after being pushed down the stairs, managed to give Nicky a flesh wound.

Off the insanity going on with his family, Craig bailed. Deran wouldn’t, though; he’d promised to stay behind and look after Lena. (Good on him.) Lucy convinced Baz to go, too, but just as they were about to drive off into the night, someone emerged from the darkness and shot him! After Lucy snuck off, telling her fading-fast lover she couldn’t stay as the cops arrived, we flashed to her and Marco retrieving from Baz’s “bank” all the leftover loot from Smurf’s vaults! Da-amn!

So, what did you think of “Betrayal”? Hoping Baz will pull through? Grade the episode in the poll below, then hit the comments.