Warning: There are so many spoilers from Tuesday’s Animal Kingdom in the following interview, it ought to be illegal.

Tuesday’s Animal Kingdom thrill ride was full of turning points: Baz got Smurf busted, J reunited with Nicky, and Marco made Craig and Deran accomplices to a kidnapping that revealed a heretofore-unseen ruthless side of Lucy. But no twists hit harder than Pope’s discovery that his mother had had him murder Catherine for no reason — she hadn’t been ratting out the Codys to the cops — and his subsequent confession to/rejection by girlfriend Amy. Here, Shawn Hatosy, who plays the shattered ex-con, breaks down for TVLine his most intense scenes in “The Leopard” and previews his character’s uncertain future.

TVLINE | Let’s start with Pope’s confrontation with Smurf. It was intense, violent, and was it just me, or was it — as so many of their scenes are — weirdly sexual?
Yeah, it does get weirdly sexual. When he puts his hands on her, [the question becomes] what is he going to do? Is he going to kiss her? We were definitely trying to get at the ambiguity of this relationship. And that goes back to the introduction of the Codys and the toxicity of Smurf’s relationships with each of her sons. She uses that sexuality… kinda like commerce. For Pope, it’s created this bizarre and complicated relationship with sex. So often, when you see him have these violent scenes, specifically with Catherine, it happens at a time when he’s having sex. [In this instance] he’s at the breaking point and barely able to live with himself [having killed her], so when he gets that confirmation from Smurf [that he did it without cause], there’s like this snap.

TVLINE | And yet, for a second, even though she’s the one who set him up to do it, it looked like he was going to let her comfort him! What the hell?
When he hugs her, she’s sort of saying to him without really saying anything, “Hey, you’re my son. I know you. You’re awful and violent and f—ed up, but I’m always going to love you.” For so long, she has created this monster, and even though he’s tried to break free, as we’re coming toward the end of the season, he’s coming back to her and, in many ways, learning that she’s the only one that’s gonna love him no matter what. 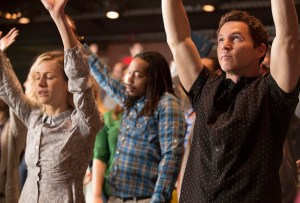 TVLINE | Which might be true, given Amy’s reaction to his confession.
Pope goes against everything he’s feeling right now when he runs to her. But she’s shown him that forgiveness is his way out of this prison he’s put himself in, and he needs that hopeful ending. He needs somebody else in his life that can just look at him as a functioning, normal person. So he reveals his darkest secret, because she’s revealed her darkest secret. And, of course, he’s not going to find any salvation.

TVLINE | Does he realize that he’s risking her life by confiding in her?
I think it’s Pope’s last stand. Well, I don’t think, I know. We’ve been toying with this all season — what is his way out? He’s got this guilt, but he’s also said that he’s not going to let Baz go down for [Catherine’s murder]. I think he’s smart enough to know that if he doesn’t get the forgiveness he needs from Amy, the next step is much darker.

TVLINE | I was surprised — relieved but surprised — that he hadn’t committed suicide by the end of this episode. Where does he go from here?
Going immediately beyond Episode 11, he’s gotta organize his affairs. That’s really what it’s about for Pope [at this point]: Can he live with himself?

TVLINE | If only he hadn’t blabbed to Amy! I was ’shipping them big time.
I’m actually quite happy with the way that [the writers have developed] Pope from Season 1 to Season 2. After the awful things he did, I wasn’t sure that the audience would be able to kind of come around on him. But he and Amy both have this quality where they’re both so damn wounded that you just wish that they were in Idaho someplace in a church and that these circumstances weren’t around them. If not for his bad behavior in society, I think they could be, ultimately, a very successful couple.