The pressure put on women to be beautiful can be quite ugly, AMC’s Dietland will have you know, and sometimes it takes a body falling from the sky to make that point.

The new series, which premiered Monday night, follows Plum Kettle (played by Joy Nash, Twin Peaks), who ghostwrites a column for a young women’s magazine and yearns to lose enough weight that the aspirational life she’s planned in her mind — single-digit dress sizes! freedom from disparaging comments tossed off by randos on the street! a boyfriend! — can finally get underway. She works for Kitty Montgomery (Julianna Margulies, The Good Wife), the magazine’s shark-like, fat-phobic editor in chief who prides herself on her svelte figure and her refusal to cede even one laugh line to age. 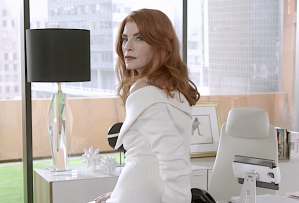 Much of the premiere establishes Plum’s rather mundane life, which involves sometimes going into the office and dealing with Kitty’s ridiculousness, but more often working from — and sometimes pinch-hitting at — a bakery owned by her friend, Steven (Tramell Tillman, Difficult People). The rest of the time, she tends to stay inside, tired of how just about everyone she runs into tends to judge her based on her bulk.

The action picks up when she’s approached by Leeta (Erin Darke, Good Girls Revolt), a shifty woman who encourages her to visit the magazine’s beauty closet, which is run by a woman named Julia (Tamara Tunie, Law & Order: SVU). Julia is secretly subversive: She doles out powders and serums to any employee who needs to write about them (or just plain wants them) but rails against the “dissatisfaction industrial complex” that ensures that women continually feel bad about themselves, thus fueling the beauty industry.

“You are a woman, and you should decorate yourself however it pleases you,” she purrs at a highly confused Plum… right before asking for the names and emails of all of the young women who write in to the advice column Plum pens for Kitty.

Will Plum give up the intel? We end the episode unsure — but that seems like a much smaller problem after some men are dropped in body bags onto a busy California highway. When their corpses are recovered, a small scroll of paper is found in one of the men’s mouths. It reads, “Jennifer,” which just happens to match the tattoo we seen on the neck of someone who seems to be part of a vicious female gang.

Now it’s your turn. Grade the episode via the poll below, then hit the comments to tell us more!