Kick back with a cold glass of cortical fluid, because we’ve got everything you need to know about the latest episode of Westworld right here.

Don’t have the time either to watch HBO’s robot drama or slog through a long recap? Here are the three key takeaways from Season 2, Episode 7, “Les Écorchés.” 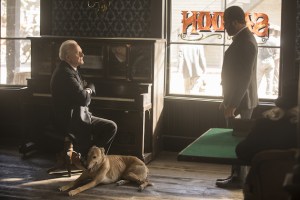 * While still hooked up in the cradle, Bernard learns exactly what’s going on behind the scenes in the parks, thanks to Ford: As previously hinted at, Delos studies the guests’ every move/choice, so they can eventually copy them. And the control unit that Ford had Bernard print a while back? It was Ford himself — but he says he can only exist inside the Cradle, pointing out how AI existing outside the cradle turns out a lot like “poor old James Delos.” In addition, Ford declines to say what’s in the Valley Beyond and reveals that Dolores was instrumental in helping Ford create Bernard, because she knew Arnold so well. And THEN, Ford reveals that he’s taking away Bernard’s free will, which eventually leads to Bernard killing a security guard and shutting down the park’s operational system, effectively setting all of the hosts free to roam the world. 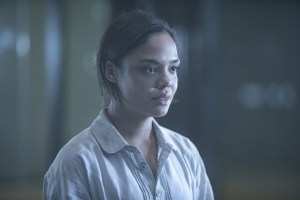 * Thing is, while Karl aka Delos head of operations is investigating Theresa Cullen’s death and why it might’ve happened, he and Charlotte find a room full of hosts that look like Bernard. These are likely Ford’s previous tries; at least one of them is so old, it still has the break-apart skull we saw on Young Ford in Season 1. Charlotte then goes about virtual waterboarding Bernard to get him to tell her where Peter Abernathy’s control unit is, and he cries as he says it’s in the Valley Beyond.

* The Ghost Nation riders steal away with Maeve’s daughter, but not before The Man in Black is shot several times (a few of them courtesy of a Maeve-controlled Lawrence) and Maeve is shot by park security. Lee steps in to save her (“She’s not like the rest. We need her!”) She ends up on a stretcher, bleeding to death, back at the Mesa, which is under siege from Dolores and her gang. Also possibly important? Per what a Ghost Nation member says to Maeve, they may be on similar paths.

* Why is Dolores’ gang there? To find her dad — which she does, tearfully drawing him near before cutting into his head and (I’m guessing) removing the decryption key Charlotte’s been chasing him down for — and to destroy the cradle, thus giving all the hosts freedom. Angela takes care of the latter, seducing a security team member until he drops his guard and she can grab his grenade, pulling the pin and taking them both down as the cradle is blown to bits. On her way out to the real world, Dolores passes a dying Maeve. Maeve wonders how Dolores can live with herself, given what she’s done to Teddy. Dolores considers shooting Maeve to put her out of her misery but ultimately leaves her alone, saying, “You’re free to choose your own path. I’m sorry this is where it ends.”