In Brooklyn, New York, an obese woman is recruited by a group dedicated to subverting beauty norms. In California, a cadre of vigilantes drops the bodies of sexual predators onto a busy freeway. And in a basement office in Manhattan, a makeup maven rails against the makeup industry, which she deems the “dissatisfaction industrial complex.” 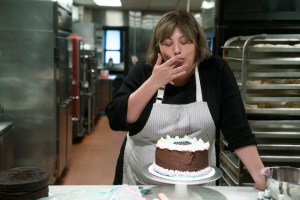 Welcome to Dietland, the new AMC dramedy that encourages its viewers to question the whole concept of glamour. (Oh, and to have that cookie they’ve been eyeing, too.)

The series is helmed by Marti Noxon (Code Black) and is based on the 2015 novel of the same name by Sarai Walker, who consults on the show. It stars Joy Nash (Twin Peaks) as Plum Kettle, the aforementioned overweight Brooklynite whose job at a young women’s magazine involves answering emails sent to editor in chief Kitty Montgomery. Kitty is played by Julianna Margulies in her first series-regular role since leaving The Good Wife; the cast also includes Tamara Tunie (Law & Order: SVU) and Adam Rothenberg (Ripper Street).

Ahead of Dietland’s two-hour premiere on Monday, June 4, TVLine sat down with Noxon, Margulies and Nash to talk weight, work and women working together (and against each other). Read on for the highlights.

LADIES IN WAITING | Noxon speaks freely about her own history with eating disorders, an experience that informs how she approached the show. “I was severely anorexic and dealt with these problems of my own perception of myself. At some point, I was able to see that my friends who were fat who were struggling with weight loss — we were all living the same life. We were waiting for this moment when we’d be acceptable, but all that is projection,” she says. “None of it is about a relationship you have with yourself or how you feel in your body. You’re constantly in this feedback loop of am I good now? Am I precious? Am I worth it?” 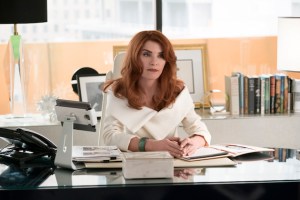 LURING MARGULIES BACK TO TV | “The thing that people don’t really know about Julianna is how funny she is,” Noxon says, saying that Margulies was an unexpectedly perfect fit to play Kitty, whom Noxon describes as “the most rapacious narcissist. She just literally cannot feel what other people feel… The bad boss is the person who seduces you while they’re slapping you. I thought, ‘If anybody can pull off anything, it’s Julianna.’ She really got it.” Margulies adds, “No one’s ever offered me that kind of role, to be able to be the comic relief and to be the outrageous one. That was new for me, so it was a nice challenge.”

LANDING THE PLUM ROLE | Nash, whose pre-Dietland career consists of small parts in shows like The Mindy Project and Casual, says she knew from the moment she saw her character’s description (250 lbs, in her 30s, smart, beautiful) that she was right for the part — “but I thought that there was no way I could get an audition, because there was no way I could get an audition for anything,” she says, laughing. But she prepped for days, anyway… and wound up finding out she had to learn 16 pages of dialogue a few hours before her big shot. (As you might’ve guessed, she nailed it.) 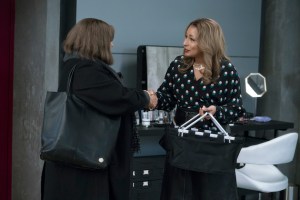 AT THE END OF HER ROPE | When we meet Plum, she’s trying to lose enough weight to be eligible for gastric bypass surgery. “She’s tried everything they wold her would fix her, and it hasn’t worked,” Nash previews. “She’s angry that she has to jump through these hoops, when who knows if it will accomplish what she’s hoping for, anyway?” Plum soon makes the acquaintance of two mysterious characters who challenge her worldview: Julia (Tunie), the doyenne of the women’s magazine’s beauty closet who wants women to question why they feel the need to gussy themselves up; and Verena (Robin Weigert, Big Little Lies), the daughter of a popular weight-loss-program purveyor whose ideas about the ideal body differ greatly from her mother’s.

WHO IS JENNIFER? | The premiere also introduces a rogue group that seems to be targeting men who’ve treated women very badly. We’ll learn that this organization goes by the name “Jennifer” — and that its trajectory will differ slightly from what happens in Walker’s novel. “One of the things I said to Sarai about the book was that pretty early on, I was really intrigued by the parallel stories and that these two worlds don’t collide, but I did want more,” Noxon says. “So they stay pretty true to the book until about Episode 6,” when Plum’s storyline and Jennifer’s activities “start careening toward each other more directly.” 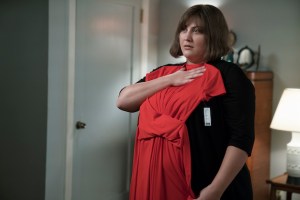 SAVE YOUR SORRIES | As a fat woman in modern society, Plum is subjected to some pretty terrible treatment from just about everybody. “I mean, everything that happens to Plum has happened to me in one way or another,” Nash says. “So many of our day players would come in and be like, ‘I’m so sorry I have to say these things.'” She chuckles. “I’m like, ‘This isn’t even the worst thing I’ve heard this week. My mom says worse than that all the time.”